Evidence of life on Mars? Fossilized creatures spotted on Red...

Researchers have concluded that some 4.1 to 3-7 billion years ago, Mars had enough liquid water to cover the entire surface of the planet with a fluid layer nearly 150 meters deep. It is entirely possible that during that time, life as we know it could have formed on Mars. 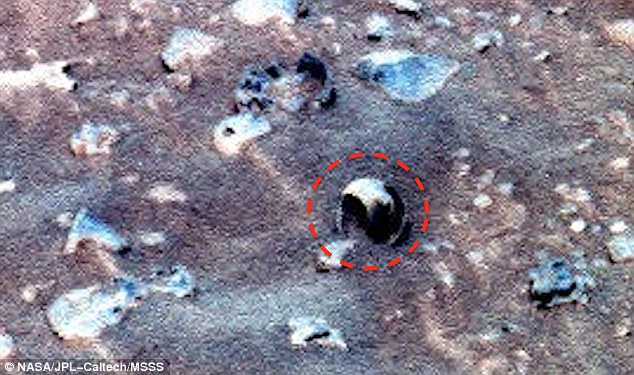 Have UFO hunters spotted the remains of ancient sea creatures on Mars? According to a new image, ‘seashell-like’, however, creatures may have just been spotted on the surface of Mars indicating Mars’ ancient ocean was once teeming with life.

Not long ago, researchers from NASA have found out that there was once a vast primitive ocean covering the Martian surface containing more water than Earth’s arctic sea. Now alien hunters believe they have spotted the remains of a creature that may have once inhabited the Martian ocean proving that in the distant past Mars and life.

According to estimates proposed by scientists earlier this year, Mars had once more water that the Arctic ocean on Earth and the Martian ocean existed on the planet for over 1.5 billion years.

Findings on Mars indicate that there was enough water and time for life to thrive on Mars. However, over the last 3.7 billion years, our neighboring planet has lost around 87% of its water turning into a barren and desolate world.

Researchers have concluded that some 4.1 to 3-7 billion years ago, Mars had enough liquid water to cover the entire surface of the planet with a liquid layer nearly 150 meters deep.

A study published in the journal Science concluded that Mars’ northern plains would have had around 20 million cubic kilometers of water, an ocean that would have been as 1.5 km deep in some locations.

Interestingly, scientists believe that Mars had liquid water for a longer time that previously thought which also means it may have been habitable for longer.

In an article about Water on Mars, Dr. Michael Mumma, co-author of the study and Senior Scientist at NASA Goddard wrote:

“We now know that Mars was wet for a much longer time than we thought before, Curiosity shows it was wet for 1.5 billion years, already much longer than the period of time needed for life to develop on Earth. And now we see that Mars must have been wet for a period even longer.” 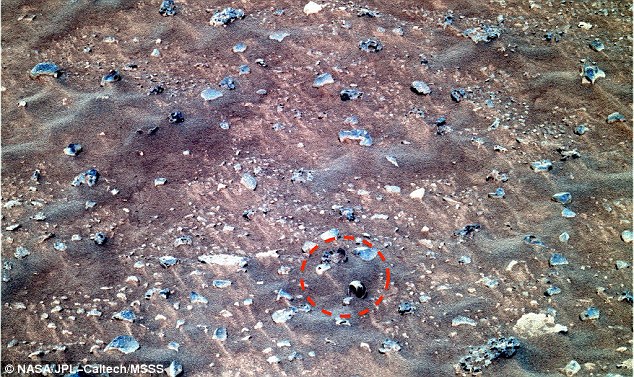 The peculiar image of the alleged fossilized creature was discovered in images taken by NASA’s Curiosity rover exploring the Gusev crater.

Skeptics, however, tend  to disagree suggesting that these discoveries are just pareidolia doing its thing, making us see familiar shapes in images of the Martian surface.

“I found this shell back in 2012 in Gusev crater in a false color Nasa photo, but came across it again this week but in an all new photo I have never seen before, The sea shell is still there and had not been edited out.”

For nearly four years, NASA’s very own alien robot has been exploring the surface of Mars in an effort to understand the red planet and its long history.

Since the rover touched down on Mars, it has taken countless images of Mars where many UFO hunters have found peculiar images that are very hard to explain.

“The shell is round, and the top of the shell was thinner, so it’s been broken away, but the outer rim still exists,” writes Mr. Waring on his blog.

“The evidence of Mars having an ocean with living creatures grows.”