A 1.7 million-year-old ‘bridge’ is the ultimate evidence that humans have been on Earth much longer than thought claims expert.  “The ratio of 10:1 (length:width) fits the actual measurements of the bridge observed today.” 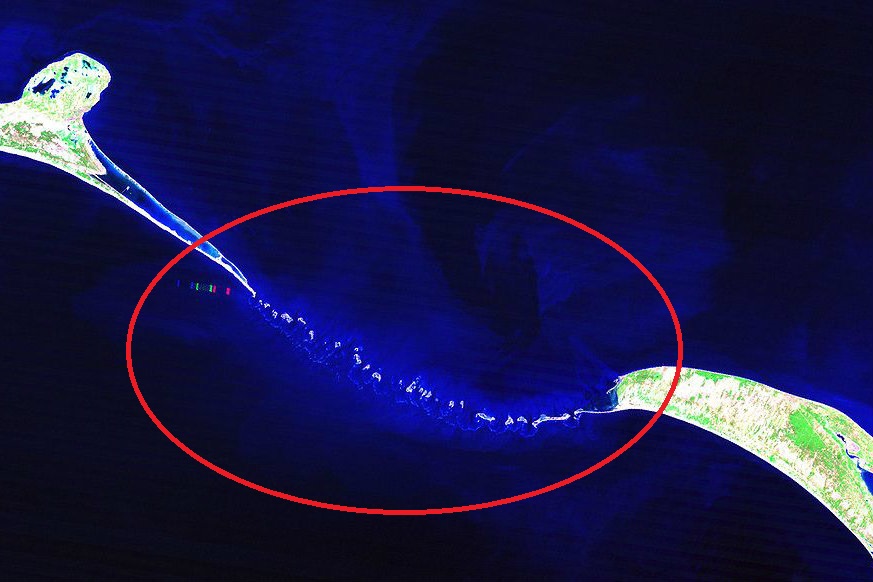 The former director of the Geological Survey of India believes he has found the ultimate evidence of a 1.7 million-year-old man-made bridge which indicates mankind existed on Earth millions of years ago and had the ability to erect ‘sophisticated’ structures long before mainstream experts suggest.

This, however, goes against everything we’ve been told since according to mainstream scientists, humans have been on Earth roughly 200,000 years, but the alleged bridge throws everything that scientists believed true into questions.

The alleged strcuture—which is allegedly even visible from space— occupies a relatively large area stretching from India to Sri Lanka.

Curiously, ancient Hindu legends suggest that King Rama, a Hindu deity built a bridge of similar proportions more than a million years ago.

According to the Hindu tradition, this “strip of land” is a bridge built by Hindu god Rama, as told in the Hindu epic Ramayana. Rama is one of the most famous manifestations of the Supreme God and is recognized as the image, the spirit, and consciousness of Hinduism, one of the oldest religions in the world.

In fact, since ancient times it is known as the “Bridge of Rama” or “Rama Setu”.

The Indian epic Ramayana tells the story of the land bridge and how it was built to serve Hindu god Rama, in order to help him cross the water to reach the large island and rescue his beloved one from the clutches of the demon king Ravanna.

It is a story of love, brave deeds and incredible constructions as it seems.

Some refer to the alleged bridge as the Rama Setu, while others call it Adams Bridge and many believe it is one of the best pieces of evidence that humans have existed on Earth much longer than we’re told.

We are talking about Dr. S. Badrinarayanan, former director of the Geological Survey of India and former coordinator of the survey division of the National Institute of Ocean Technology (NIOT). He studied core samples of the bridge and is apparently convinced that we’re not looking at a natural formation—as other scientists suggest—but at a man-made structure, and one that was ‘erected’ more than a million years ago.

According to reports, Dr. Badrinarayanan performed a survey of this structure and concluded that it was man-made. Dr. Badrinarayanan and his team drilled 10 bore holes along the alignment of Adam’s Bridge. What he discovered was startling. About 6 meters below the surface he found a consistent layer of calcareous sand stone, corals and boulder like materials. His team was surprised when they discovered a layer of loose sand, some 4-5 meters further down and then hard rock formations below that.

A team of divers went down to physically examine the bridge. The boulders that they observed were not composed of a typical marine formation. They were identified as having come from either side of the causeway. Dr. Badrinarayanan also indicates that there is evidence of ancient quarrying in these areas. His team concluded that materials from either shore were placed upon the sandy bottom of the water to form the causeway.

In a special discussion board on Rediff, Dr. Badrinarayanan said:

“It is not a natural formation; the top portion of it appears to be a man-made structure.”

“To understand what I am saying from the geological point of view, you have to get to know several things.”

“What is known as Adam’s Bridge is originally a natural grade divide separating the Bay of Bengal and the Indian Ocean to the south. So, the geological aspects are different on either side.”

Dr. Badrinarayanan added: “We found marine sands on top and below that was a mixed assemblage of corals, calcareous sand stones, and boulder-like materials.

“Surprisingly below that up to 4–5 meters [13–16 feet], again we found loose sand and after that, hard formations were there.”

He added that “below the corals and boulders, we are getting loose sand, which means it is not natural.”

However, the “Ramayana,” the bridge is said to have been built upon a wooden foundation (which was placed atop a preexisting natural elevation) that was then covered with large and small stones.

But obviously, there are many who disagree with Dr. Badrinarayanan.

One of them is Suvrat Kher, a geologist who specializes in marine formations, who firmly believes we are looking at nothing more than a natural formation.

Writing about the alleged bridge, Dr. Kher said: “During the Pleistocene ‘ice-age’ period, glacial buildup and melting forced fluctuations in sea-level by tens of meters, setting up the conditions for several episodes of coral reef and sand shoal formation. “During periods of large sea-level drops in the Pleistocene, there would have been a land connection between India and Sri Lanka. ”

“But at the end of the last Wisconsin glaciation, the sea-level began to rise world-wide.”