Freemasonry, History And The Modern World

Freemasonry is a fraternal organization that can actually be traced to the local fraternities of stonemasons, which from the end of the fourteenth century have regulated the qualifications of masons and their interaction with authorities and society. There are several degrees of Freemasonry, its gradal system, retain the three grades of medieval craft guilds: Apprentice, journeyman (now called Fellowcraft) and Master Mason. These are the degrees offered by craft or blue lodge Freemasonry. There are additional degrees, which vary with locality and jurisdiction, and are administered by different bodies than the craft degrees.

One of the most important Freemasons in History is US President George Washington (the first Masonic President).

George Washington. joined the Masonic Lodge in Fredericksburg, Virginia when he was only 20 years old, in 1752.  During the War for Independence, General Washington attended Masonic celebration and religious observances in several states. He also supported Masonic Lodges that formed within army regiments, and at his first inauguration in 1791, President Washington took his oath of office on a Bible from St. John’s Lodge in New York.

During his two terms, he visited Masons in North and South Carolina and presided over the cornerstone ceremony for the U.S. Capitol in 1793 which was performed at the Masonic ceremony.

In retirement, Washington became charter Master of the newly chartered Alexandria Lodge No. 22, sat for a portrait in his Masonic regalia, and in death, was buried with Masonic honors. But the truth about Freemasonry and the connection to our History, and American history is quite surprising.

Believe it or not, Freemasonry is America’s largest and oldest fraternity, it has been very important part of community life in the United States for over two hundred and fifty years. Freemasonry is an initiatic society which according to the research we have done, seeks “to unite men of differing beliefs into a harmonious and productive community through the application of Masonic moral values and the practice of benevolence, intellectual development, and mutual respect.”

It is not known where Freemasonry began, but we do know that the earliest recorded ‘making’ of a Freemason in England is that of Elias Ashmole in 1646.

Organized Freemasonry began with the founding of the Grand Lodge of England on the 24th of June 1717, on St John’s Day actually, which was the first Grand Lodge in the world. Shortly after that, Ireland followed in 1725 and so did Scotland in 1736.

There are two main theories of origin. According to one, the operative stonemasons who built the great cathedrals and castles had lodges in which they discussed trade affairs. They had simple initiation ceremonies and, as there was no City and Guilds certificates, dues cards or trade union membership cards, they adopted secret signs and words to prove that they were trained masons when they moved from site to site. In the 1600s, these operative lodges began to accept non-operatives as “gentlemen masons”. Gradually these non-operatives took over the lodges and turned them from operative to ‘free and accepted’ or ‘speculative’ lodges. The other theory is that in the late 1500s and early 1600s, there was a group, which was interested in the promotion of religious and political tolerance in an age of great intolerance when differences of opinion on matters of religion and politics were to lead to bloody civil war. In forming Freemasonry, they were trying to make better men and build a better world.

As the means of teaching in those days was by allegory and symbolism, they took the idea of building as the central allegory on which to form their system. The main source of allegory was the Bible, the contents of which were known to everyone even if they could not read, and the only building described in detail in the Bible was King Solomon’s Temple, which became the basis of the ritual. The old trade guilds provided them with their basic administration of a Master, Wardens, Treasurer and Secretary, and the operative mason’s tools provided them with a wealth of symbols with which to illustrate the moral teachings of Freemasonry.(source http://www.dcgrandlodge.org/)

The City of Washington

The Geometrical shapes of Washington

We know that the Obelisk has a direct connection with Egyptian history, mythology, and even science according to some researchers. These incredible monuments were constructed from the earliest days of Egyptian history and have managed to push themselves into the cornerstones of Egyptian history. It is believed that they are directly connected to the gods.

What we find also very interesting is the fact that a reflecting pool is also present. The Washington monument clearly points towards the heaven and the Pleiades, with the reflecting pool, the monuments points below so we have a crystal clear correlation which is telling us; ” as above, so below“. 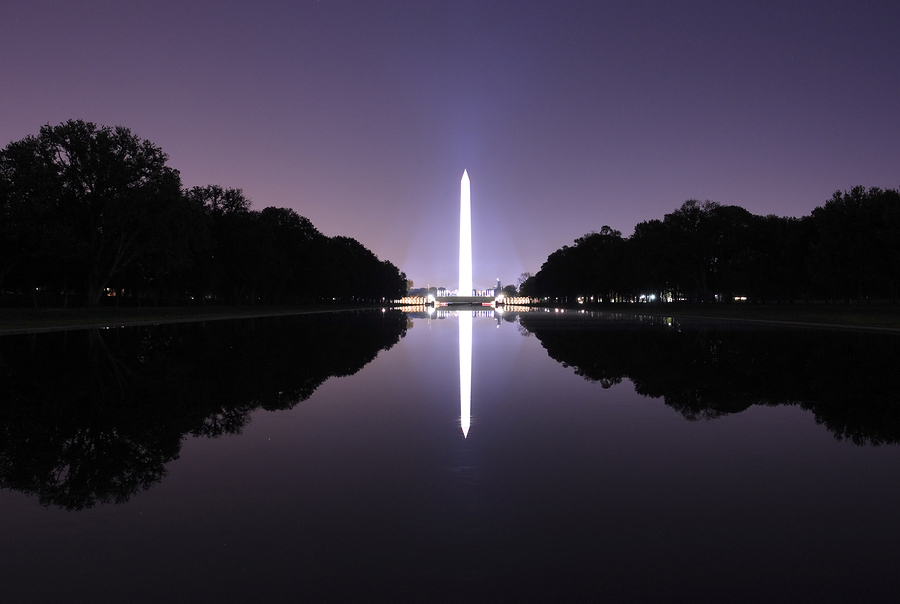 But when you talk about Washington D.C. and the Freemasons, you have to look at the bigger picture. The entire layout of Washington D.C. has a secret meaning. It mimics ancient places found in Egypt, Rome, and even Greece. Perfect Geometrical lines, triangles, rectangles, when you look at Washington from the air, you begin to notice this incredible layout. It truly is a sacred place.

There are many hidden geometrical signs that perhaps few people know of. The Capitol building, the White House, and the Washington Monument forms a perfect triangle, which many researchers claim, represents to Masonic square and compass. But there are more shapes which show Freemasonry. Jefferson had great influence on the design of Washington D.C. Jefferson strongly believed that there was extraterrestrial life in the “heavens” and to reflect his belief, he wanted to present the capital of the United States, as the center of the Universe, which was achieved by the shape of a pentagram which is visible in the layout of Washington’s monuments, and it was Pierre Charles L’Enfant who was selected by George Washington  to lay out the capital of the United States in the 10 mile diamond. Pierre Charles L’Enfant achieved this by aligning the four corners of the square with the four cardinal directions, and so, these incredible circles, rectangles, and triangles are present in the city layout. Washington DC has Freemasonry written all over it.