The Goddesses Of Slavic Mythology 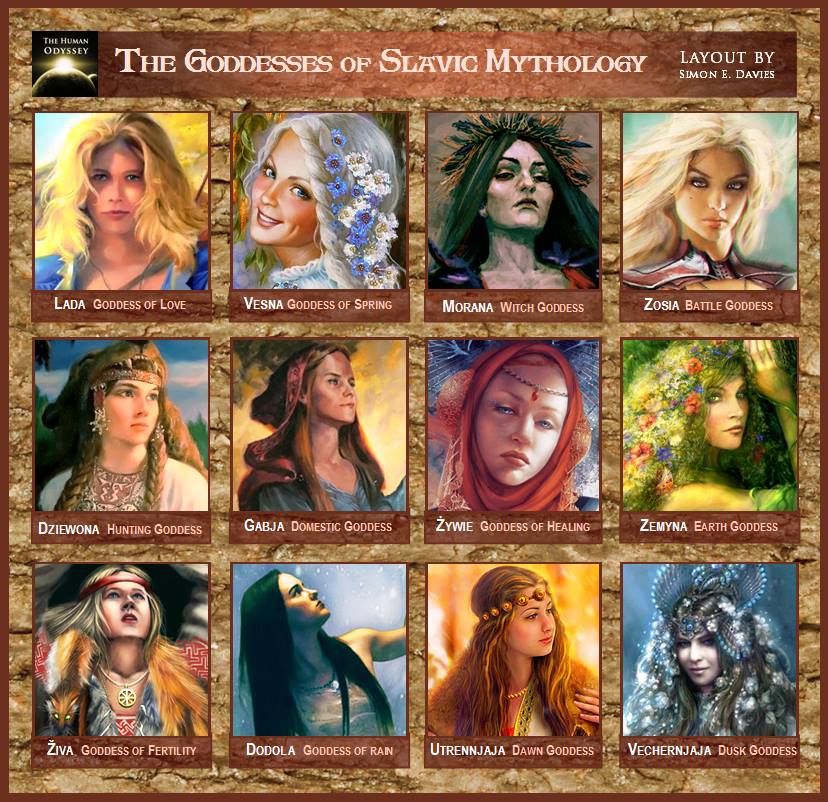 The goddesses of Slavic folklore are shrouded in mystery, their true nature obscured by the Christian faith which sought to eradicate all pagan worship. However, a large part of their mythology can be reconstructed from linguistics, folklore and comparative mythology.

One of the most renowned characters was Lada, a love goddess who resided over love and beauty and possessed many of the attributes of Freya (Norse), Isis (Egyptian), and Aphrodite (Greek). She was depicted as a woman with long golden hair, braided with a wreath of grain (symbolising abundance).

This bitter season was presided over by Morana, a witch goddess who ruled over winter and the afterlife. She was known to some as a phantom, often depicted as both a nightmarish figure and a formidable warrior, linking her to the Morrigan of Celtic folklore.

Another battle goddess was Zaria, who was said to possess incredible beauty. She was known to her worshippers as the “heavenly bride”, and protected her warriors in battle. She was said to accompany them in a full suit of armour, protecting them from death in battle (as did the Valkyrie who were the guardians of the Norsemen).

Dziewona was also experienced in the martial arts, skilled in hunting and stealth. Intent on keeping her chastity, she bears a striking resemblance to the goddess Artemis & Diana from Greco-Roman mythology (who were both virgins and hunters). Those who worshipped her were sure to bring home a bounty of food for their supper.

It was the goddess Matka Gabia, who most tribespeople valued, for she was the protectress of the home. She was associated with the hearth (much like Hestia from Greek mythology), and was a guardian of her beloved people. Woe betide those who offended this goddess however, for when brought to anger, Gabia would burn their home to the ground.

For those who suffered a misfortune, Żywie, the goddess of healing, could always be trusted to bring health and prosperity. She was associated with regeneration & rebirth, and is linked to the day of Friday. This suggests she may also possess maternal qualities, for the mother goddess of Norse mythology (Frigg) was also a Friday goddess.

The mother goddess was a consort of the sky god, and in Slavic folklore, this role was played by Zemyna. She was said to bring nourishment to the land, and was married to Perun, the Slavic god of thunder. This would have made them a very formidable couple in their time.

Another fertility goddess was Ziva, who was associated with life and immortality. She was often depicted naked, holding apples in one hand (like Eve from the Abrahamic myths), and grapes in another. The apples she possessed, were said to shine a brilliant gold, much like the divine apples of Iduna (Norse myth) who resided over immortality.

The last goddesses mentioned in this article are heavenly divinities. Dodola was the Slavic goddess of rain. Slavic folktales said that when she milks her heavenly cows (the clouds in the sky), it rained upon earth, nourishing all life. It was said that every spring, Dodola would fly over woods and fields, decorating the land with leaves and blossoms.

Finally there were the Zorja (the Auroras), who were two beautiful goddesses. Utrennjaja represents the Morning Star, and she opens the gates of her fathers palace (Dažbog) so that the Sun may begin his journey. She is depicted as a warrior goddess, fully armed and courageous. Vechernjaja embodies the Evening Star, who closes the palace gates at dusk when her father Dažbog’s returns.

By referencing all the comparative goddesses of other cultures (Celtic, Greek, Norse etc), it becomes clear that at some point in our distant history, all these divinities originated from the same source. Historians refer to the people of this origin culture as the ‘Proto-Indo Europeans’, who emerged from Eastern Europe as far back as 5500 BCE.

Some scholars suggest that the Slavic goddesses are the closest we will ever come to understanding the birth of mythology. Perhaps if we can fully resurrect their past, the secrets of the ancients will be returned to us once again.