Has a parallel universe opened? Mysterious floating city reappears in...

Is it possible that a parallel universe has opened on Earth? Mysterious floating city reappears in the sky creating confusion among residents in California 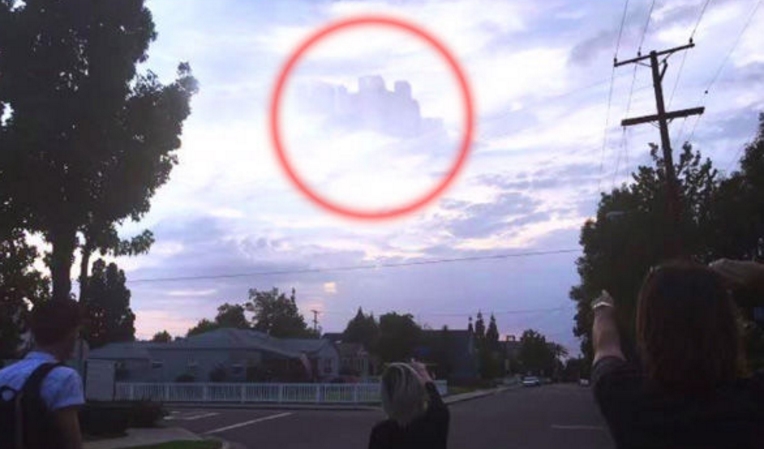 After several reports of ‘floating cities’ appearing in the skies around the world, another incredible similar sighting has been made by people claiming a ‘portal from another dimension’ may have opened above Earth.

Not long ago, in 2011, hundreds of people from the small border town of Dulali in Darazo, Nigeria, claimed to have seen a huge ‘flying city in the sky’. “The giant floating city” appeared out of nowhere, the entire city was surrounded by a thin cloud, it flew very close to the ground, through these “clouds” witnesses claimed to have seen beautiful large buildings, towers and the sound of machines originating from the city.

After the Nigeria sighting, another one took place on October the 7th, 2015. In the streets of Foshan, people watched in amazement as a giant city appeared out of nowhere.

According to media reports, thousands of people stood still, watching the ‘ghostly city’ in what has been the second apparition of a ‘flying city’ in China. The mysterious ‘city’ was reported to have giant skyscrapers and other smaller buildings that are ‘clearly’ visible in the image according to social network users. But back in 2011, a colossal structure that clearly resembled a giant city was spotted over the city of Huangshan in the southern Anhui in China.

Now, the latest sightings made by residents of California show images of the sighting that appears to be nearly identical to that of China in 2015. So far, three theories have been proposed as to what the mysterious sightings might have been: Either it is another elaborate hoax, a government conspiracy or it is in fact, a portal to another dimension.

However, the most mysterious part of the sighting that took place over California is the fact that it is nearly identical to the one that appeared over China in 2015.

Due to these statements, many people around the world believe that experiments such as those at CERN might create a never-before-seen phenomenon on planet Earth. An example of this phenomenon might be the numerous mysterious ‘floating’ cities that have been seen all around the planet.

A Fata Morgana is a form of mirage that can be seen on land or at sea, in polar regions but also in the desert. This type of optical illusion is Mother nature’s way of saying: It’s magic. A Fata Morgana mirage can involve almost any kind of distant object, including boats, islands, houses, flying pigs and why not… huge flying cities.

Fata Morgana occurs because rays of light are bent when they pass through air layers of different temperatures in a steep thermal inversion where an atmospheric duct has formed.

The narrator in the video said: “I threw this into Photoshop and I am real sceptical.

“I think this is fake because because I looked at the angle of the city and everything else.”

“I overlaid the city from China and it is an identical match, even some of the cloud formations are the same. There is a kind of a little dip in the cloud on the China one and the same dip on the Orange County one, which leads me to believe this is doctored footage.”