Here Are 10 Of The Most Amazing Buddhist Cave-Temples In...

Ancient people used caves as a shelter for tens of thousands of years.

Wherever we look, we find evidence of caves being used by groups of people as their home.

And as history developed and societies grew more complex and developed, caves remained an important aspect in the way of life of our ancestors.

Excavating clusters of massive rooms into the sides of cliffs and mountains in order to create so-called cave-temple structures is also something that has been around for thousands of years, and was a widespread technique used in India, eventually spreading towards Asia with Buddhism.

Chosen sometimes because of their scenic beauty, some caves were also elected by ancient Buddhist monks to be home of a specific cave temple because passing monks had ‘visions’ that they interpreted as divine signs, where temples ought to be created.

Since most of these sites were pretty well isolated from the rest of the world, the sites served to intensify the spiritual connection inside of the caves.

Some of the cave-temples use their architectural height to draw attention to the heavens, while some of them used their naturally carved geological formations to show a balance between man and nature. However, each and every one of the temples highlighted the value of spiritual treasure hidden deep within them.

Also known as the Thousand Buddha Grottoes or the Caves of the Thousand Buddhas, the Mogao caves are a system of 492 temples located around 25 kilometers of the center of Dunhuang, a strategically located oasis, built at a religious and cultural crossroad of the Silk Road in Gansu China. The caves were cut into the side of a cliff which is close to two kilometers long.

The caves contain some of the most excellent examples of Buddhist art spanning a period of 1,000 years.

The first caves were dug out in 366 AD as places of Buddhist meditation and worship. The Mogao Caves are the best known of the Chinese Buddhist grottoes and, along with Longmen Grottoes and Yungang Grottoes, are one of the three famous ancient Buddhist sculptural sites of China.

Formerly known as the Wuthoushan Grottoes, they were a former ancient Buddhist Temple near the city of Daton, in China’s Shanxi province. 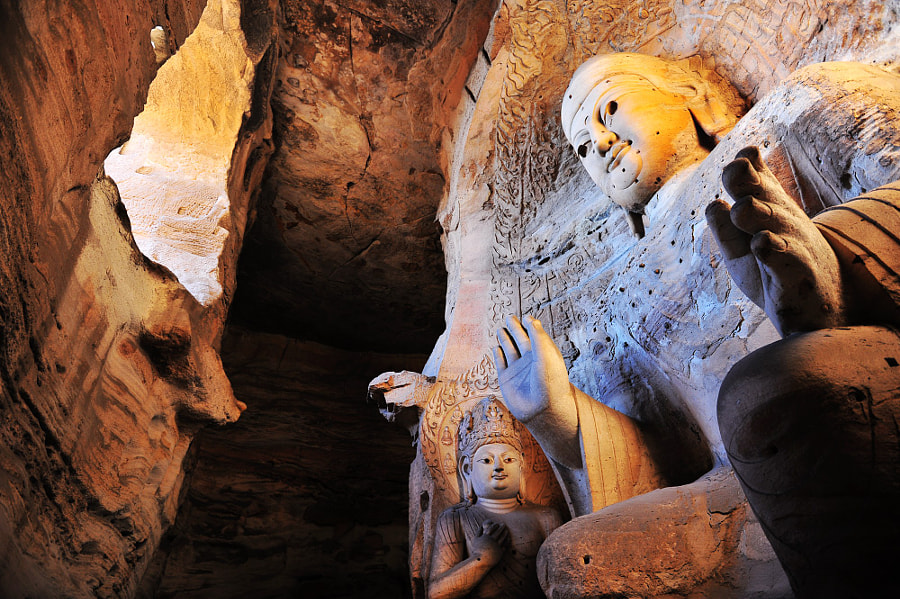 The Yungang grottoes offer an unprecedented example of rock-cut-architecture and are on the three most famous, most visited sites in China, the other being Longmen and Mogao.

In the distant past, the grottoes were ‘excavated’ in the other face of a sandstone cliff standing around 60 feet high. They are an outstanding example of the Chinese stone carvings from the 5th and 6th centuries. There are 53 major caves, along with 51,000 niches housing the same number of Buddha statues.

Another fascinating cavern home to impressive Buddhist elements is located some 20 kilometers southeast of Hpa An, Myanmar. The Saddar Cave welcomes its visitors into a gigantic cavern with countless Buddha statues and pagodas.

The most amazing part is that it can be walked all the way from one side to the other side, beneath the mountain.

Another fascinating temple complex we must note. The Tianlongshan Grottoes are known for the Buddhist temples located within them. The temple complex is beyond fascinating, and it spans two mountains: there are eight grottoes on the eastern mountain and 13 on the western mountain. The complex was built and excavated over a number of centuries, spanning from the northern Qi dynasty until the Tang dynasty, and contains Buddhist art of high historic importance.

Located on the northern bank of the Muzat River, a commercial hub of the Silk Road, the caves are considered the be the earliest major Buddhist complex erected in China, developing between the third and eighth centuries. Furthermore, the site is also considered the largest of Buddhist caves associated with the ancient Tocharian kingdom of Kucha. The caves are the largest Buddhist site in Xinjiang. There are 236 cave temples in Kizil, carved into the cliff stretching from east to west for a length of 2 km 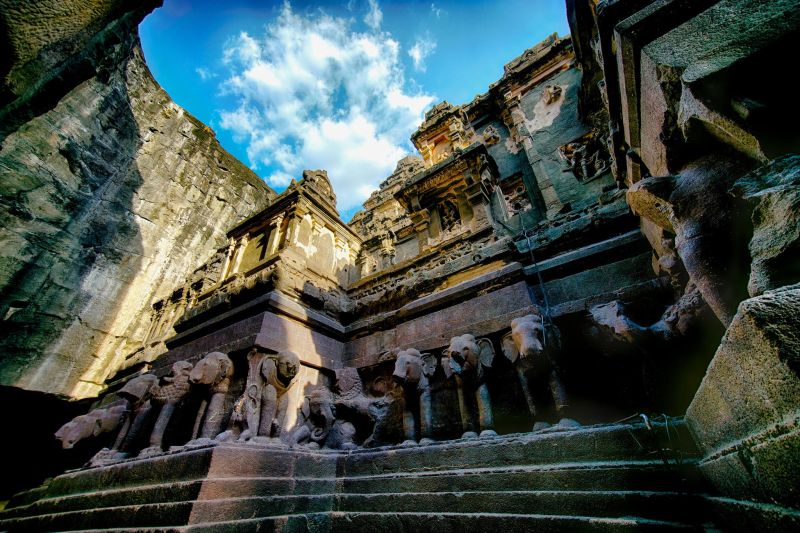 Thousands of years ago, the builders of the temples and caves of Ellora demonstrated extremely advanced construction and engineering skills.

One of the greatest mysteries is how and when.  But perhaps the even greater question is how ancient mankind managed to do this using only hammers, chisels, and picks, thousands of years ago.

The Kailasa temple in Ellora, Maharashtra, India is a MEGALITH carved out of a SINGLE rock. It is considered as one of the most remarkable cave temples in India, mostly because of its humongous size, architecture and sculptural implementations.

Kailasa is just one of the 34 monasteries and temples which extend over an area of 2 kilometers. The temples were dug side by side in the basalt cliff at Ellora. The temple itself was built out of a single rock, 164 feet deep, 109 feet wide, and 98 feet high, making it ONE of the BIGGEST MONOLITHIC structures on the planet, carved out of a single rock. 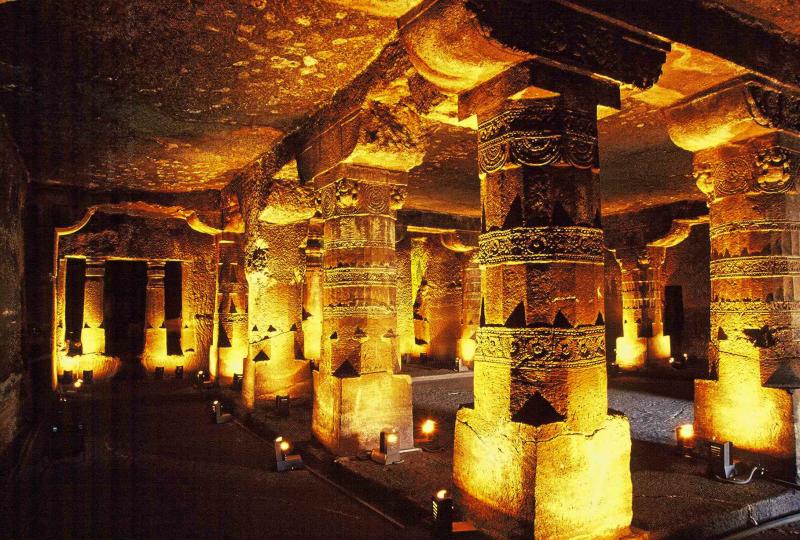 The Ajanta Caves are rock-cut Buddhist caves dating back to the 2nd century BC, located in the Aurangabad district of Maharashtra state of India. The cave system—composed of around thirthy caves—is dubbed a masterpie of Buddhist religiousr art that inguenced Indian Art that followed it. The caves are believed to have been built in two different phases. The different Buddhism elelemnts were carved onto a 250-feet wall of rock. The elements depict the past lives and rebirths of Buddha, and rock-cut scultpures representing Buddhis. Ancient records suggest that these caves served as a monsoon retreat for monks. With the Ellora Caves, Ajanta is one of the major tourist attractions of Maharashtra.

As you have probalby seen by now, there are turlly magical sites all around the globe. And while many of these sites are not so famous, they all safeguard incredible tales, legends, myths, and most importantly, a rich and pletfyful histroy.

One such place is the Kyaut Sae Cave located in the town of Burma, Burma. The main attraction is a massive Buddhist Temple built inside the cave. The temple itself may not be well-known to the outside world, and evidence of that is the fact there is little to no information about the temple on the Internet. And we all know that you can find anything on the net, right? Anyway, the temple is one of the most sacred and hidden temples in Myanmar. 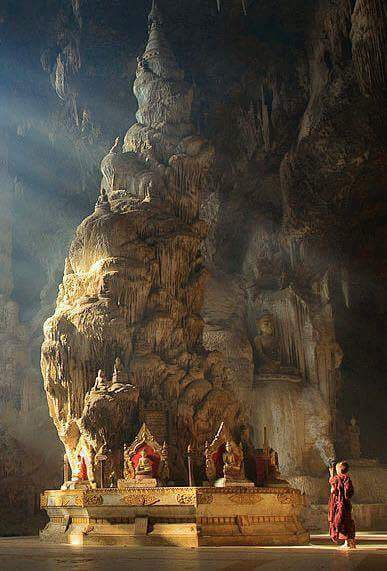 Legend speaks that the cave was used a a hiding place for locals who were espacping the Mongols sometime in the 13thc century.

However, now it has become acenter of pilgrimage, where we can see some of the most amazing Buddhist statue sin Burma.

In the center of one of the caverns is a golden sculpture of Buddha.

Another incredible Buddhist site are th ePindaya Caves in Myanmar. The site i san important Buddhist pilgrimage site and tourist attraction. Thrree caves run on thr rifgher north to south. However, only the webster cave can be entered and explored.

The intereior of the cave contains mroe than 8,000 images of Buddha. Some of the older elements of the cave have incsritions that place them in the late 18th century.

There are other elements inside the cave without insriptions that experts say may be older.

According to experts, no other place in Burma displays such a range of style, not only in the images, but also in the ornamental thrones and reredos which surround the images.

The Longmen grottoes are artificial caves that extend approximately one kilometer along the Yi River, and are located about 15 kilometers south of Luoyang City in China between the Xiang Shan and Longmen Shan Mountains.

Home to 2,345 artificial caves, 2,800 inscriptions, 40 pagodas and about 100,000 Buddhist images, the Longmen Grottoes are home to one of the most amazing Buddhist sites.

30% of the caves date from the period of the Northern Wei dynasty, while 60% is from the Tang Dynasty period and the other 10% is from different periods.  the 2,345 artificial caves were excavated, thousands of years ago from the limestone cliffs of the Xiangshan and Longmenshan mountains. The Longmen Grottoes were built between centuries V and VII, when the Wie dynasty moved to Louyang, resulting in the sculpting of more than 100,000 images of Buddha inside a limestone mountain, becoming one fo the best examples of Buddhist art in China.