Here Are 11 of the Most Powerful Ancient Weapons Mentioned...

The Mahabharata is the longest epic poem known and has been described as “the longest poem ever written.” Its most extended version is made up of over 100,000 śloka or over 200,000 individual verse lines (each shloka is a couplet), and long prose passages.

In this article, we take a look at eleven of the most powerful weapons—astras—mentioned in this legendary epic narrative.

In ancient Hindu history, the Pashupatastra was the most destructive personal weapon of Shiva, Kali and Adi Para Shakti discharged by the mind, the eyes, words, or a bow. This mighty weapon could destroy creation and vanquish all beings. In fact, many scholars agree that the Pashupatastra is, in fact, the most powerful, destructive and irresistible weapon of all other astras mentioned in Hindu mythology. The Mahabharata tells us that only Arjuna— the main central character of the ancient Indian epic Mahabharata, possessed this weapon. 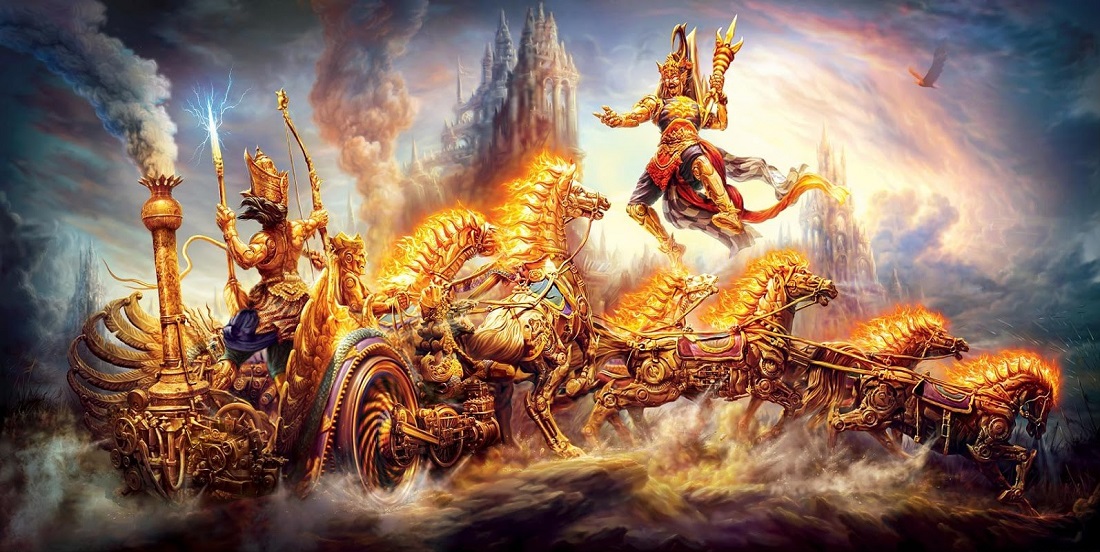 This weapon is considered the evolution of the Brahmastra and it is one of my favorite weapons mentioned in the Mahabharata. The weapon was capable of summoning a shower of meteorites upon the enemy. The Mahabharata offers an excellent description of this mighty Astra:

“It blazes up with terrible flames within a huge sphere of fire. Numerous peals of thunder were heard, thousands of meteors fell and all living creatures became terrified with great dread. The entire sky seemed to be filled with noise and assumed a terrible aspect with flames of fire. The whole earth with her mountains and waters and trees trembled.”

Doesn’t that description sound kind of like what a modern-day nuclear weapon would do?

Furthermore, it is said that once the weapon is used, the area it was used upon will become destroyed, and nothing new could grow upon that land, not even a blade of grass for at least 12 years. It will not rain for 12 years in that area, and everything including metal and earth becomes poisoned.

The Brahamastra was the weapon of choice of Lord Brahma, who created it for Indra.

This was one of the most powerful weapons in ancient times, and its description is as close as it gets to descriptions of modern-day nuclear weapons. The Brahmastra was used to destroy inferior divine weapons or counter them. It was described as being as heavy as a mountain but could travel as fast as the wind nevertheless. The Brahmastra was painful as poison and as energetic as fire.

Another weapon whose description I find overwhelming is the Twashtarastra. This weapon had the ability to confuse friend for enemies, making them turn again each other.

The Indraastra is described as a divine weapon that transforms into many missiles capable of destroying an entire army. The Indraastra was the weapon of Indra– a Vedic deity in Hinduism. This weapon was invoked a number of times in the Mahabharata war.

One of the most powerful weapons mentioned in the Mahabharata is without a doubt the Trishula, a trident used by the god Shiva. The Trishula is used as a symbol in two of the most important religions on Earth: Hinduism and Buddhism.

According to the Mahabharata, the Trishula was used to sever the original head of Ganesha–one of the best-known and most worshipped deities in the Hindu pantheon.

Another extremely powerful weapon mentioned in the Mahabharata. The Sudarshana Chakra belonged to Lord Vishnu—one of the principal deities of Hinduism, and the Supreme Being in its Vaishnavism tradition.

In the Rigveda, The Sudarshana Chakra is described as a symbol of Vishnu, and as the wheel of time. Lord Vishnu is said to have beheaded Shishupala with the Sudarshana.

Vajra is a Sanskrit word which means both thunderbolt and diamond.

The Vajra is described as a powerful weapon, usually having a shape of a club with a ribbed spherical head. The vajra is the weapon of the Vedic rain and thunder-deity Indra.

Another ‘astra’ mentioned in the Mahabharata is the Varunastra. It is described as a missile, and it belonged to Varua, the ancient Hindu God of water, rain and the oceans. The weapon is said to have the ability to produce catastrophic torrents of water. It could raise powerful floods. This weapon was used to counter the Agneyastra, the weapon of choice of Agni—the God of Fire.

The Narayanastra was another weapon used by Lord Vishnu in his Narayana form. The weapon—astra—is described as firing a powerful tirade of millions of deadly missiles simultaneously. According to the Mahabharata, only Lord Krishna, Drona, and Aswathama possessed the Narayanastra.

One of the most interesting details about this weapon is that it could only be used once in a war. If anyone tried using it two times, then it would destroy the user’s own army.

The Agniyastra was the weapon of choice of the God of Fire—Agni. The weapon is described as a powerful device that upon detonation, is able to destroy a large area in seconds. The Mahabharata tells us it was another ancient missile weapon. The fire created by this weapon is said to have been nearly impossible to extinguish.