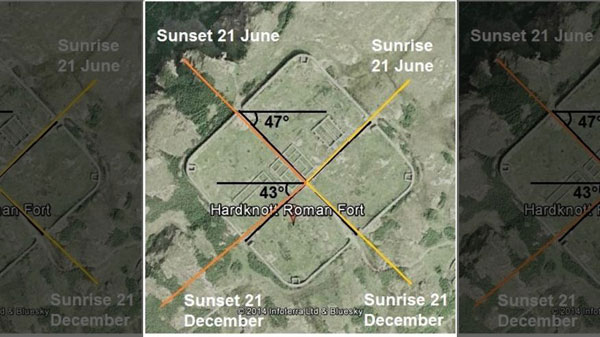 Researchers from the Politecnico di Torino in Italy have made a discovery that is amazing. The construction of an ancient Roman fortress in contemporary Britain: its doors are aligned so that sunlight during the summer solstice and winter generates a remarkable lighting effect celebrating the shortest and longest day of the year, honoring the gods of the sun and the sky.

he old square shaped fortress took researchers by surprise. In the study, published in the journal Philica, researchers reveal that the Romans designed and built this fort so that in the summer solstice the sun aligns with the doors of the northeast and southwest, reflecting the light to the other two, and in winter the southeast and northwest parts would illuminate. The accuracy of this defensive fortress built during the reign of Emperor Hadrian is so perfect that scientists had to use special software to calculate the angles generated by sunlight during the solstices. It is shocking how Roman engineers made these calculations and built this defensive structure without the technological tools of today.

the ancient structure was built by Roman legionaries and workers around 138 A.D. and like many other structure that have been found in Britain it was commissioned by Emperor Hadrian. Even though the fort is extremely deteriorated and mostly in ruins,  this ancient Roman structure was believed to house around 500 Roman Soldiers and workers.

Emperor Hadrian was a very interesting Roman Emperor, he was actually the first Roman Emperor to make it clear that he was gay. He was a charismatic Emperor that was loved by the masses even though his reign was characterized by unusual things.

Hadrian’s wall is one of the most famous structures of the Roan Empire found in Britain; the wall was originally 117.5 km long while the width of the wall depended mostly on the construction materials that were available in the vicinity. The construction of the wall started in 122 A.D. and was mostly finish in a period of six years.

As many other structures with shocking precision with the sun, this fort has been added to the list of structures that display extreme precision. Even though history has proved ancient Romans to be extremely capable engineers and architects, researchers are having a hard time figuring out how these ancient constructors were able to place these structures with such a precision, that we today, need the aid of computer simulations and aerial views of the terrains.

Why the constructors of this fort payed so much attention to position this ancient fort in such a manner is a mystery, even though researchers speculate that it was to pay tribute to the Gods of the Sun and the sky, but even more mysteriously is the “how”. Like many other cultures before the Romans, buildings have been placed in peculiar ways, creating light effects, following the movement of stars, planets and other celestial objects. 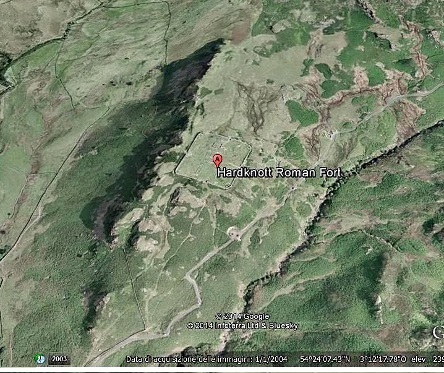 Discoveries like this open up a lot of questions regarding ancient societies that lived on Earth, why is it that countless structures favor the position of the stars and movements, where was the knowledge obtained from and finally, why were these structures placed in the way they are, but most importantly why is this a pattern that is repeated in cultures from Mesoamerica to Asia, on every single continent on our planet.