Is this weird Huge-Eyed skull evidence of ‘Aliens’ visiting Earth?

According to tests performed by researchers at the Veterinary College in Copenhagen who looked at the skull concluded that:  “Although resembling a mammal, certain features make it impossible to fit the animal into Linnaean taxonomy.”

The mysterious skull with vast eye sockets and fanged teeth has created an online debate, since many claims, the intricate skull may have belonged to an alien being.

The mysterious skull was described as being 50 percent bigger than a standard skull and was discovered by Danish contractors replacing pipes on Sealand Island. Thus the skull was named the Sealand Skull, and many people believe it did not originate from this planet.

According to reports, researchers at the Veterinary College in Copenhagen who looked at the skull concluded that:  “Although resembling a mammal, certain features make it impossible to fit the animal into Linnaean taxonomy.”

Subsequent carbon dating at the University of Copenhagen’s Niels Bohr Institute for Sciences revealed that the ‘alien-like’ skull was around 800 years old, adding to the mystery of the entire story.

The skull which was excavated in 2007 was analyzed by scientists in 2010. Further excavation of the area didn’t reveal anything unusual other than animal bones, stone axes, and other artifacts that according to researchers originated in the Neolithic period. 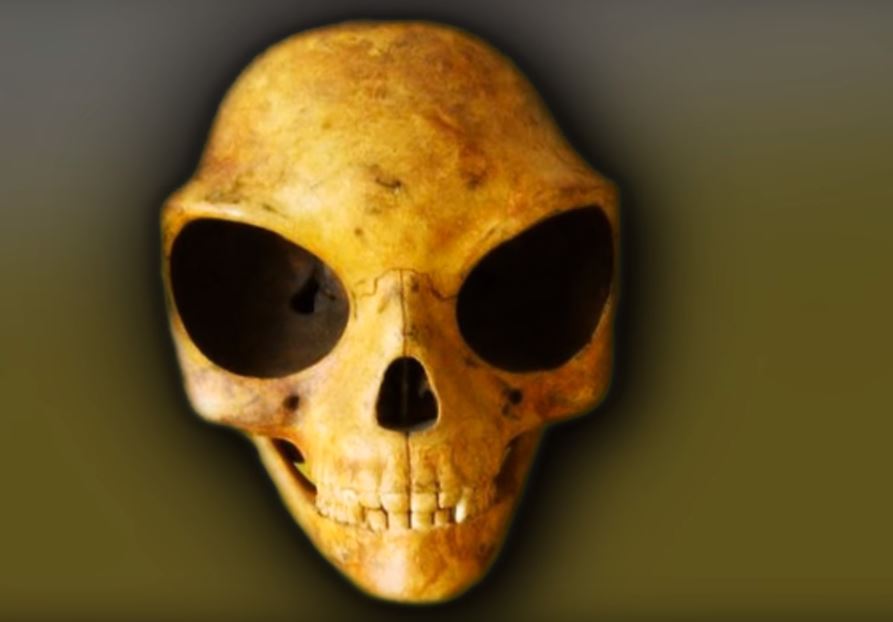 As if the skull wasn’t mysterious enough, it turns out that Sealand is there the secretive Order of Pegasus Light was based at. This order is a secret society of poets and writers which according to many was sworn to protect a group of group of unbreakable alien artifacts including, bizarrely, an alien skull allegedly left behind by extraterrestrial visitors from the constellation Pegasus.

Interestingly, the order was formed in the 1300’s and among its more notorious members were some of our history’s most influential writers like  William Shakespeare, Thomas Jefferson, H.G. Wells, and Ambrose Bierce.

Author from popular website ufo sightings daily is convinced that this is yet another piece of evidence that clearly points out that aliens have been visiting earth for hundreds if not thousands of years.

Scott Warring wrote on his blog: “Here is a great skull found in Denmark and it’s really remarkable.

“The enlarged eyes, the teeth are mind-blowing. It doesn’t fit into any known species and is 50 percent larger than a human skull. Perhaps a half human, half alien hybrid.”

However, as with all similar discoveries, many people believe this is yet ANOTHER –extremly bad— hoax.

According to the author of Skeptophilia:  “A photograph. No hard evidence at all, since none of the sources mention where the skull currently is, who the scientists are who carbon-dated it, or anything else.”

“There’s a brief mention of some group of oddballs called ‘The Order of the Light of Pegasus’ who had a house in Olstykke and were reputed to be ‘the guardians of objects… believed to be mysterious’,  but searches for anything related to said Order all bring you back to websites having to do with the Sealand skull.

“The whole thing has the hallmarks of a hoax, but do I know it is?  Nope.  To prove that it’s a hoax – or to prove anything else about it – you’d need to have access to the skull itself.

“If it is real, it’d be a pretty earth-shattering discovery, bringing up the inevitable question of why the scientists who studied it weren’t crushing each other to death to be the first people to write a paper on it.

“But that, too, hardly constitutes proof of anything. At the moment, the best we can say is that there’s no evidence one way or the other for a claim made by an unknown individual about an alleged scientific study by unnamed scientists about a skull that may or may not exist.”

It seems that as with all alien-related things, there are two sides to the story. While many people believe that there is something odd about the Sealand Skull, there are others who believe it is not worth researching as it is just another hoax.