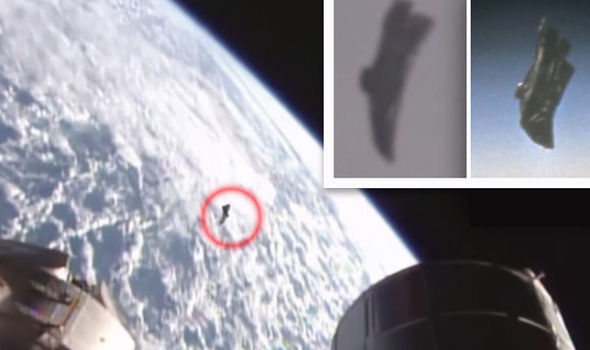 An alleged leaked video has surfaced on the internet showing the (in)famous ‘Black Knight Satellite’ tailing the International Space Station. Even though skeptics remain confident that the alleged mythical satellite does not exist, there have been countless reports suggesting that the Alien Satellite does in fact exist, and is orbiting the planet.

It is believed that the enigmatic Alien Satellite has been emitting a radio frequency that has been intercepted not only by space agencies around the globe but by several amateur radio operators who believe the truth behind the Black Knight is far more mysterious than anyone is willing to accept.

One of the most interesting facts about the enigmatic ‘satellite’ is that Nikola Tesla claimed to have intercepted radio signals, from space, from the Black Knight Satellite.

But Tesla was not the only one who was able to intercept these mysterious signals. Guglielmo Marconi, 1st Marquis of Marconi was an Italian inventor and electrical engineer, known for his pioneering work on long-distance radio transmission and for his development of Marconi’s law and a radio telegraph system. Guglielmo Marconi also intercepted signals originating from space a few years after Tesla, researchers have since claimed that Tesla and Marconi intercepted the same signals.

According to the YouTube Channel, the new footage was leaked out of Russia after being filmed in January by the ISS’s own cameras very close to the Russian Soyuz spacecraft which was delivering supplies.

In the video, voices of several astronauts can be heard speaking in Russian. While it not clear if they commented the mysterious UFO tailing them, one woman does appear to gasp.

YouTube users have entered into a debate ever since the video was posted.

Posting under the name MainForcePatrolKZ, one said: “If this object was potentially a piece of ancient or alien technology, then why haven’t NASA tried getting a closer look at it?”

Kirill Polishchuk, another user points out it’s just a thermal blanket saying: “Debris from the ISS will have roughly the same speed. It is a thermal insulation board, most likely.”

Is the Black Knight Satellite really an extraterrestrial piece of technology orbiting our Planet? or is there another explanation for it. It surely could be just a combination of unrelated information, something made up throughout the years or opinions of people that have over-interpreted the images made available to the public. Many questions but not enough answers, the Black Knight continues to be a mystery in the sky.