A set of satellite images provided by NASA reveals strange patterns of dots and dashes on the surface of the Red Planet. Their origin is explained by Hi-RISE mission scientists. 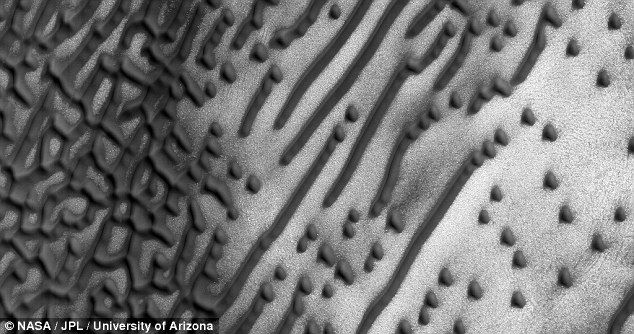 The enigmatic series of dots and dashes spotted on the surface of Mars have created yet another online discussion about Mars.

At first glance, it seems as if the mysterious patterns on the surface of Mars are the ultimate result of Martians using mores code. But, upon closer inspection, you will notice that the enigmatic dots and dashes not an alien code on Mars but the result of a vast area of dunes on the surface of our neighboring planet.

According to researchers, the enigmatic patterns are caused by the limited amount of sand in the area which ultimately led to the creation of the patterns seen in the images of Mars.

The oddly shaped formations were photographed by NASA in the Hagal dune field south of Mars’ north polar cap.

According to Hi-RISE mission scientists, the enigmatic patterns are probably located in an ancient infilled impact crater which has low amounts of sand available for dune formation and is influenced by local Martian winds. 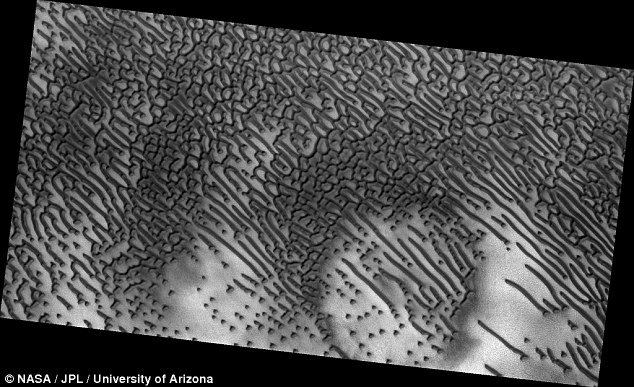 According to scientists, the peculiar dashed are in fact linear dunes formed with the help of ‘bi-directional’ winds, which did not travel parallel to the dune. Researchers explained that the combined effect of winds coming from tho different directions at the right angles to the dunes gathers material into a linear shape, which is what we are seeing in Hi-RISE’s satellite images.

The smaller dots which can also be appreciated in the images —called barcahnoid dunes— are formed when there is an interruption in the process that creates the linear dunes —above mentioned.

‘This process is not well understood at present and is one motivation for HiRISE to image this area.’

IN addition to the above, recently, researchers from NASA have discovered a new type of dune on the red planet which looks eerie similar to dunes found underwater on our planet.

Scientists explained that on Earth, wind, and water pass over sand and cause the formation of large dunes or small ripples which are called bedforms.

‘First, the large wind ripples form at wavelengths that are intermediate between those of more typical small ripples that form from grain impacts and those of large dunes.

‘Second, the large wind ripples do not look like any bedforms we readily observe in sandy deserts on Earth – they have sinuous crests and asymmetric profiles, and in fact, most closely resemble current-ripples which form underwater on Earth’s riverbeds.

‘Third, we think that the formation of the large wind ripples, by analogy to that of current-ripples that emerge underwater on Earth, is facilitated by viscous drag exerted by the winds of the Martian low-density atmosphere.’