Meet the Martian monolith that was not made by Martians

Doing some Xenoarchaeology on Mars, from Earth. 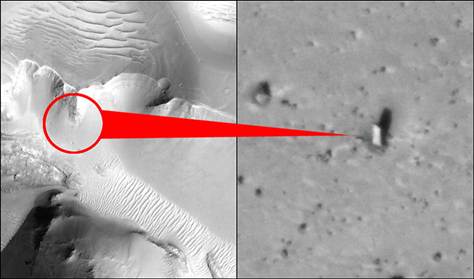 We decided to practice a little bit of Xenoarchaeology (Xenoarchaeology is a hypothetical form of archaeology that exists mainly in works of science fiction. The field is concerned with the study of material remains to reconstruct and interpret past life-ways of alien civilizations. Xenoarchaeology is not currently practiced by mainstream archaeologists due to the current lack of any material for the discipline to study.) and investigate a strange looking monolith that has got the internet crazy. According to many UFO sites, NASA’s HiRISE camera on-board the Mars Reconnaissance Orbiter took a very interesting image of an object on the surface of the Red Planet. The image shows a monolith on the surface of Mars which, according to ufologists around the web, is an artificial rectangular boulder. But lets take a bit and check out the image, the placement and lets not forget to mention a couple of things about the HiRISE camera on-board of NASA’s MRO.

First of all the placement of this boulder is very strange because it is located  at the bottom of a cliff and is accompanied by many other, mostly smaller boulders.  It is very likely that in fact, this “Alien boulder” belonged in a different location at some point in the past and it’s current location can be attributed to the fact that it may have actually broken away from a much larger piece of Martian rock probably due to the harsh conditions that rule on Mars. From there it got to the point where it is today. The location actually supports this theory because why else would you place a monolith in a location like that? It would hardly be noticed in its current location and it is in danger of being hit by other rocks.

The HiRISE camera that actually photographed this object on Mars has a resolution of approximately 30 centimeters per pixel which is amazing when you consider from where the image was taken; 300-kilometers above the Martian surface, but the camera itself does not offer enough sharpness to capture the rugged and uneven attributes of the boulder.

“When your resolution is too low to fully resolve an object, it tends to look rectangular because the pixels in the image are squares. Any curve will look like a series of straight lines if you reduce your resolution enough,” Jonathon Hill a research technician and mission planner at the Mars Space Flight Facility at Arizona State University told Life’s Little Mysteries

Even though most of us are just waiting for the moment that one of NASA’s robotic explorer finds something on Mars that points towards intelligent life, the boulder displayed in the image here just isn’t that moment. Some critics will say that the boulder itself is out of place, which it clearly is, but that doesn’t make it artificial. Considering the quality of the image, we cannot fully appreciate the object and so we cannot conclude that the object is of intelligent design. Here on Earth we have quite a number of extremely weird looking boulders. Here are a few that look like something man would have done, but they are actually a masterpiece of mother nature.

As you can see, here on Earth we have some strange looking natural formations, which have nothing to do with mankind or intelligence other than the intelligence of mother nature who is life’s greatest architect.