Located at the Tamya Oasis in Saudi Arabia is a fascinating megalith called Al-Naslaa. It is perfectly split in half and has curious symbols portrayed on its surface. If that wasn’t enough, the two rocks split in half with laser-like precision have managed to remain standing for centuries, and are somehow perfectly balanced. The stones were split in half with a LASER-LIKE precision.

Imagine walking around in the desert, exploring the unknown and you come across a massive standing stone, split in half by a PERFECT LINE. What would be the first thing that jumps to your mind?

The standing stone(s) of Al-Naslaa truly are a GIANT mystery. Located in Saudi Arabia, the two stones split in half have created confusion among experts ever since their discovery.

Considered as one of the most photogenic petroglyphs on the surface of the planet, the massive rock is split in half with extreme precision. However, according to experts, the laser-like precision cut was NOT created artificially.

According to many, it is one of the greatest mysteries found by man, and this incredible ancient stone structure attracts thousands of tourists each year who come to Al-Naslaa to observe its perfection and balance, which has given rise to countless theories that try to explain its origin.

The rock is in perfect balance, supported by two bases and the strangest thing is that it is perfectly split in half. It all suggests that at some point it must have been worked on by extremely precise tools, some have even ventured out and said laser-like tools.

Look at that precision! 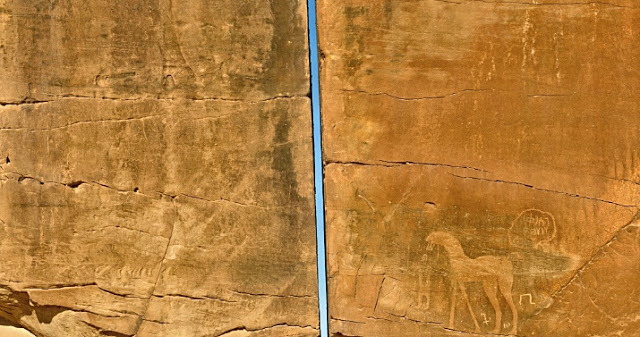 Each part of the split stone has a smaller rock or shock absorber at the bottom, preventing it from touching the ground.

Archaeological discoveries show that in ancient times the region where the rock is located was inhabited. In fact, it is one of the most photogenic petroglyphs in the area.

The megalith was discovered by Charles Huver in 1883, and ever since its discovery, it has been a subject of debate among experts who have divided opinions when it comes to its origin.

In 2010, SCTH – Saudi Commission for Tourism & National Heritage announced the discovery of a rock near Tayma with a hieroglyphic inscription of Pharaoh Ramses III.  Based on this discovery, researchers have hypothesized that Tayma was part of an important land route between the Red Sea coast of the Arabian Peninsula and the Nile Valley. Recent archaeological discoveries show that Tayma has been inhabited since the Bronze Age.

As noted by http://saudi-archaeology.com the split between two standing rock and its flat surface is a completely natural occurrence.

UnusualPlaces offers a natural explanation for the enigmatic, laser-like cut…

“…Most likely the ground shifted slightly underneath one of the two supports and the rock split. Could be from a volcanic dike of some weaker mineral that solidified there before everything was exhumed. Or, it could be an old pressure crack (you see a parallel crack just to the right of it) that has been pushed/pulled apart some. Or, it could be an old (minor) fault line, since fault motion often creates a zone of weakened rock that erodes relatively easier than the surrounding rock…” 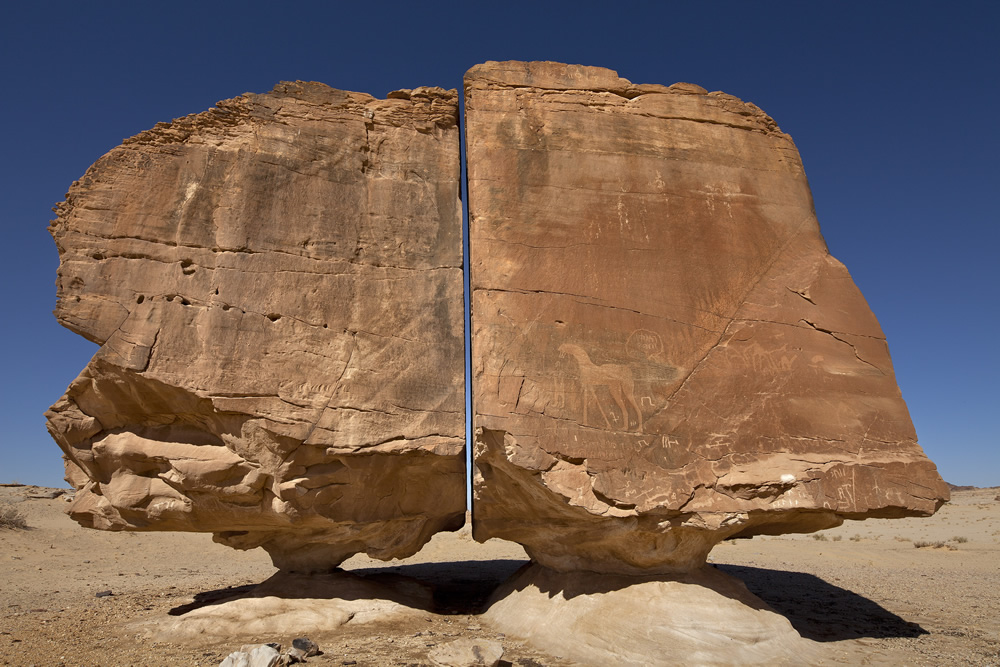 But that, of course, is just another theory. The extremely precise cut, dividing the two stones has raised more questions than answers.

If we are to understand its origin, perhaps we should travel back in time.

According to reports, the oldest mention of the oasis city appears as “Tiamat” in Assyrian inscriptions dating as far back as the 8th century BCE. The oasis developed into a prosperous city, rich in water wells and handsome buildings.

Furthermore, archaeologists have discovered Cuneiform inscriptions possibly dating from the 6th century BCE at the oasis city. It is mentioned several times in the Old Testament. The biblical eponym is apparently Tema, one of the sons of Ishmael.

Interestingly, for part of his reign, Babylonian king Nabonidus retired to Tayma for worship and looking for prophecies, entrusting the kingship of Babylon to his son, Belshazzar.

As you can see, besides being an area where numerous archaeological discoveries have been made, the area where the incredible megalith of Al-Naslaa is located is also rich in history.

Taking a look at the stone of Al-Naslaa you cannot help and wonder what its true purpose was. Is the split in the rock really a result of the forces of nature as some experts suggest? Or is it possible that just as there are many other ancient places on Earth—dating back thousands of years—featuring precision cuts, this stone too was crafted by an unknown technology?