Ancient Egypt has since always been connected to magical and incredible stories that stretch across the land of the Pharaohs. While most people connect Ancient Egypt with the might Pyramids at the Giza plateau, the truth is that there are countless other sites in Egypt that are as incredible as the Pyramids of Giza.

One of those incredible ancient sites is, without a doubt, the Temple of Seti located in Abydos. There, we will find one of the most interesting and enigmatic pieces of hieroglyphs, carved on a heavy stone slab that supports the ceiling of this amazing temple. The Abydos temple honored numerous deities, including Isis, Horus, Set, Amun-Re, Re-Horakhty, and Ptah.

Many researchers claim that the enigmatic carvings actually depict modern-day flying machines such as helicopters, airplanes, and even submarines, while skeptics remain confident that this is just another example of Pareidolia, and that we are being tricked by our brain, into seeing familiar shapes.

The enigmatic Temple of Abydos, commissioned by Set I and his son Ramses II has been the center of debate for years, where researchers from around the world have discussed the possibility that the mysterious carvings in the Temple actually depict modern-day vehicles, and if they do, where did the ancients see them? The possibility that these hieroglyphs actually depict modern-day vehicles raises numerous questions: Did the Ancient Egyptians see similar vehicles in the past? Do these hieroglyphs prove ancient man was visited by highly advanced beings in the past? And is it possible that there are other temples or sites in ancient Egypt depicting similar things?

When word about the hieroglyphs go out, many believed the image was a fake, at that time, no one could understand the incredible similarity between the hieroglyphs and modern-day vehicles such as helicopters. But even though some of us would love for these ancient hieroglyphs to depict actual modern-day machines, most archeologists claim that this is the result of Palimpsest, where Egyptologists actually identified overlapping of the hieroglyphics in the above image. 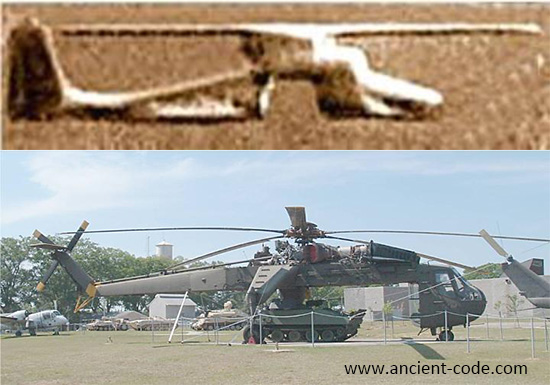 Modern day researchers state that it is likely that the original hieroglyphs were erased in the distant past and replaced by a set of new glyphs which made the new ones resemble today’s vehicles. But what are the chances of something like this happening? However, even though many mainstream researchers accept the theory that the glyphs were retouched in the distant past, there are many others who believe that these hieroglyphs are still a mystery and that an acceptable scientific conclusion is needed.

But how likely is it that the mysterious hieroglyphs at the Temple of Seti 1 are a product of palimpsest? (A palimpsest is a manuscript page, either from a scroll or a book, from which the text has been either scraped or washed off so that the page can be reused, for another document) (source).

The incredible depictions seen in the temple of Abydos are clean and precise and you cannot find a single place inside the temple where hieroglyphs were sloppy or out of place.

While re-carving inscriptions was a common practice in ancient Egypt, the temple of Abydos does not have sloppy hieroglyphs anywhere in it. This makes it very difficult to assume that the ancient Egyptians decided to recurve some of the parts of the temple, creating what appear to be mysterious depictions of objects resembling modern-day vehicles.

Sloppy hieroglyphs or depictions of real-life vehicles that the ancient Egyptians saw thousands of years ago? You decide!