The mystery behind the 18 Giant skeletons found in Wisconsin

Their heights ranged between 7.6ft and 10 feet and their skulls “presumably those of men, are much larger than the heads of any race which inhabit America to-day.” They tend to have a double row of teeth, 6 fingers, 6 toes and like humans came in different races. The teeth in the front of the jaw are regular molars. Heads usually found are elongated believed due to longer than normal life span. (reported in the 4 May 1912 issue of the New York Times)

The truth is that many ancient cultures around the globe firmly believe giants were real, and numerous ancient texts –like the bible— suggest these ‘mythological beings’ were real. “There were giants in the earth in those days; and also after that, when the sons of God came in unto the daughters of men, and they bare children to them, the same became mighty men which were of old, men of renown.” -Genesis 6:4

In the words of Vine Deloria, a Native American author, and professor of law:

“Modern day archaeology and anthropology have nearly sealed the door on our imaginations, broadly interpreting the North American past as devoid of anything unusual in the way of great cultures characterized by a people of unusual demeanor. The great interloper of ancient burial grounds, the nineteenth century Smithsonian Institution, created a one-way portal, through which uncounted bones have been spirited. This door and the contents of its vault are virtually sealed off to anyone, but government officials. Among these bones may lay answers not even sought by these officials concerning the deep past.”

On May 4, 1912, the New York Times published a surprising news: Archaeological excavations near Lake Delavan in Wisconsin had found skeletons of extraordinary dimensions.

Their heads were elongated and larger than normal. According to news of the time, the skeletons found by a group of archaeologists of the University Beloit College of Wisconsin measured between 2’3 and 3 meters.

These were just some of the many skeletons that were discovered around the globe.

However, the mystery started after the discovery was made as nothing more was known about the skeletons. Where did the skeletons end up? Were they deliberately hidden from the public? Interestingly, the area where the Giant skeletons were found is known for giant-sized skeletons which do not seem to correspond to the characteristics of ordinary people or natives to the area.

In 1891, scientists from the Smithsonian Foundation found a giant skeleton in the excavations of the pyramidal tombs in the Madison area, curiously also in Wisconsin.

All skeletons allegedly disappeared as well. 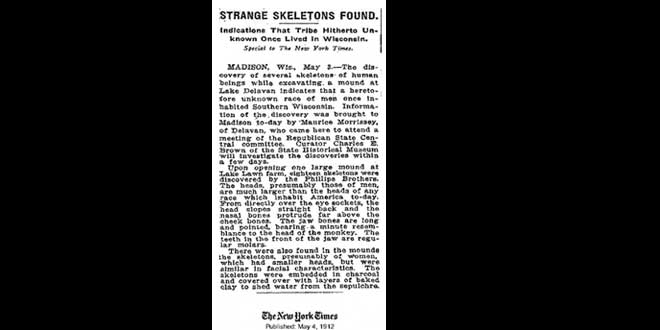 The Smithsonian states they do not know anything about them, or any kind of oversized skeletons. However, there is evidence in the press for nearly 100 years of huge skeletons findings throughout the American Midwest.

In Minnesota, Ohio, Iowa, Indiana, Kentucky and Illinois the discovery of this type of skeletons is well documented.

“Conspiracy theorists” believe that the American Government is hiding something and has no interest whatsoever to talk about a possible race of giants that inhabited the United States centuries ago.

But the America’s aren’t the only continent where such discoveries have been made.

In other parts of the world, researchers have also found human remains that seem to belong to a race of giants. 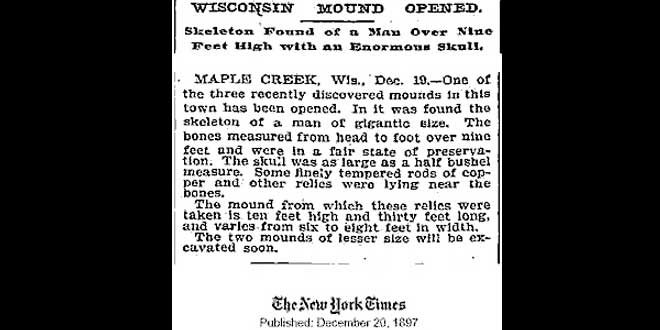 Despite all the evidence, it must be mentioned that many similar discoveries were nothing but elaborate hoaxes which regrettably discredit authentic discoveries made around the planet.

Another fascinating example is the 38-centimeter long finger found in ancient Egypt.

The remains of this finger are impressive; it is a huge mummified humanoid finger that has 38 centimeters in length. Researchers from Egypt believe it had to belong to a creature that was over 5 meters height. Only a few people got to take images of this incredible artifact in 1988.

The images displayed were taken in 1988 and were published by one of Europe’s leading newspaper, BILD.de

What do you think? Is there evidence that giants lived on Earth? Or are all of these discoveries nothing more than elaborate hoaxes?

WISCONSIN MOUND OPENED. Skeleton Found of a Man Over Nine Feet High with an Enormous Skull