NASA Astronaut Says He Saw An ‘Organic, Alien-Like Creature’ in...

NASA Astronaut Leland Melvin claims he saw what appeared to be an ‘organic, alien-like’ creature in the Space Shuttle payload bay and even reported the sighing to ground control.

NASA engineer Leland Melvin made the astonishing claims—welcomed by UFO hunters, during a discussion with Scott C. Warring from UFO Sightings Daily.

The NASA astronaut—and former NFL football player confessed to seeing the alleged creature in the payload bay of the space shuttle Atlantis, which was orbiting Earth.

Immediately after noticing the ‘creature’, he and his fellow astronauts reported the sighting to NASA, but the space agency experts answered that the most likely explanation or the mysterious sightings were ice which had broken off from the shuttle and that it was the movement of the floating shards that caught the astronaut’s eye, making him see ‘an organic’ creature. 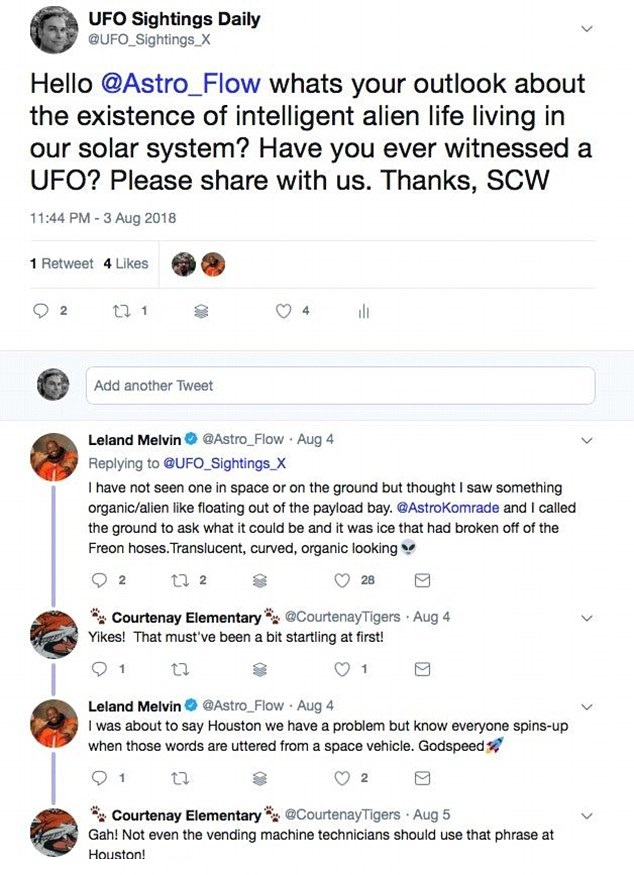 The peculiar conversation took place on Twitter where Mr. Waring asked: “What’s your outlook about the existence of intelligent alien life living in our solar system? Have you ever witnessed a UFO?”

The NASA engineer responded he witnessed something translucent, curved, organic looking’ when he was working with colleague Randy Bresnik.

He joked saying: ‘I was about to say “Houston we have a problem” but know everyone spins-up when those words are uttered from a space vehicle.’

The astronauts went on asking NASA what they may have seen in space, and the space agency answered that the most likely explanation was ice that had broken away floated of the freon hoses.

Warring went on to suggest that Nasa’s explanation was a cover, what Mr. Melvin dismissed, although he did write, ‘you never know’.

Melvin isn’t the first to speak out about aliens.

A number of NASA astronauts have made sensational claims about alien life, and things they had witnessed during their time in space.

Astronaut John Glenn was once surrounded by mysterious objects while he was in space:

“They’re all over the sky…”

This is Friendship Seven. I’ll try to describe what I’m in here. I am in a big mass of some very small particles, that are brilliantly lit up like they’re luminescent. I never saw anything like it. They round a little; they’re coming by the capsule, and they look like little stars. A whole shower of them coming by.