Has NASA’s Curiosity Rover Found a ‘Pyramid’ On Mars?

Is this the ultimate evidence that ancient civilizations inhabited the red planet in the distant past? NASA’s Curiosity rover has photographed one of the most interesting images of the surface of Mars ever since it touched down on the red planet in 2012.

Curiosity was launched from Cape Canaveral on November 26, 2011, at 10:02 EST aboard the MSL spacecraft and landed on Aeolis Palus in Gale Crater on Mars on August 6, 2012

You can check out the RAW image of the pyramid here. 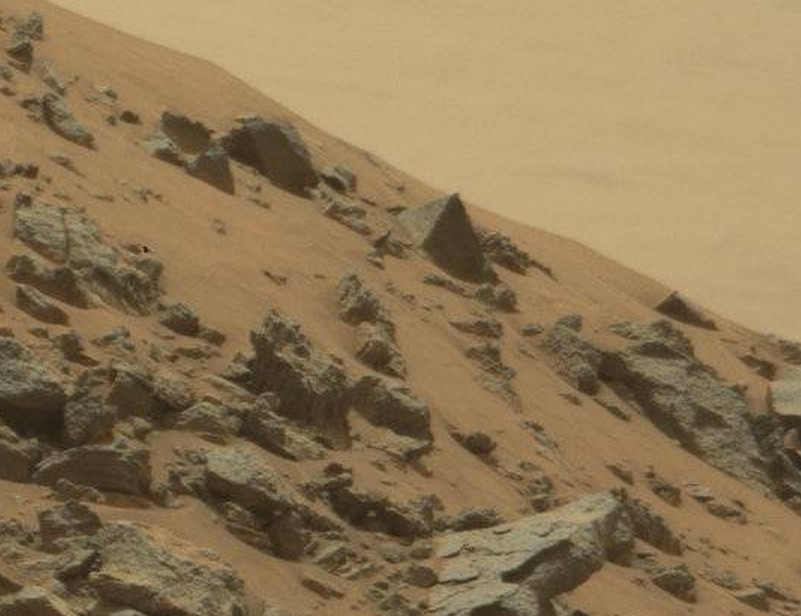 Ufologists and researchers have already started speculating what this artifact is and according to many, it might actually be the cornerstone of a much larger pyramid buried under the Martian sand.

Even though many people suggest that this is just another coincidental rock formation of the red planet, others believe that the perfect geometry of the structure suggests it is an artificially created construction and is not in any way Pareidolia or tricks of light and shadow.

Is this pyramid among the clearest photographic evidence that points toward the existence of artificial structures on Mars built by an earlier civilization? many believe yes.

The “perfect” symmetry of the structure is outstanding and the “pyramid” stands out from the rest of the Martian rocks. The angles and lines of the pyramid are believed to be a telltale sign that differentiates a natural formation from a manmade one. The image was taken by Curiosity rover’s Mastcam on Sol 978, May 7th on Earth.

Despite the remarkable symmetry of the pyramid, none of the Curiosity rovers subsequent pictures taken at intervals a couple of minutes or hours include the mysterious Martian Pyramid. It seems that the team in charge of Curiosity deliberately chose not to zoom into the mysterious object on the martian surface for further imagery. If they did in fact take more images of the Mysterious “martian pyramid” these were not released to the general public.

Many believe that we have not seen everything what actually happens on the Red Planet. Former NASA employees have come forward suggesting that the agency operates under a veil of secrecy and much of what happens on the red planet has remained as highly confidential information that has been kept secret in a very tight circle inside the agency.

Lately, there have been many important discoveries on Mars which could point to the existence of life on the red planet in the distant past.

Is it possible that this “newly discovered” pyramid is the crucial piece of evidence that has missed all along? Is it possible that the Pyramid is in fact the product of extraterrestrial civilizations on the red planet in the distant past? Many suggest that the evidence of intelligent life on the red planet has been abundant, yet we all have decided to ignore it for some reason.

Will the discovery of a pyramid on Mars wake interest of other researchers? Will it change the way we look at the red planet? There are many questions surrounding the red planet that have yet to be answered, now, one of these questions surely is, if this mysterious structure that clearly resembles the great pyramid of Giza, is the product of ancient civilizations present on the red planet.