UFO researchers and journalists who have claimed ‘mummified alien’ bodies were discovered in a remote cave in Nazca Peru are supposedly being undermined by the Peruvian government in an attempt to discredit an investigation into the alien bodies. “Scientists have discredited our findings without even looking at the remains.”

Mexican Paranormal journalist and UFO investigator Jaime Maussan believes that the alleged discoveries are being undermined by not only the government but by scientists and the Peruvian Ministry of Culture who have attempted to label the mysterious alien bodies as a hoax in fear that the ‘truth’ will lead to history book being rewritten.

A few months ago it was claimed that up to six mysterious bodies were discovered in a remote cave near the Nazca lines in Peru. The alleged mummified alien remains were unlike ordinary human bodies and had three massive fingers and elongated heads. 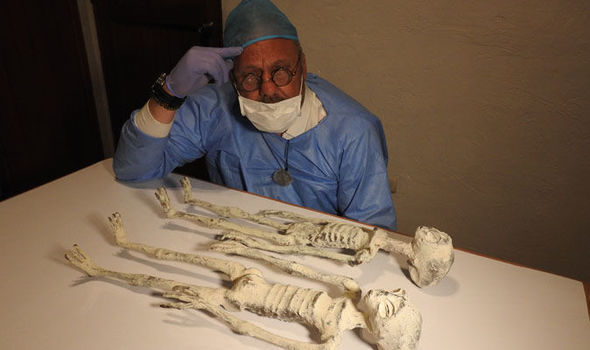 Gaia.com, who featured the discovery and has been following it since day one posted a number of videos astonishingly claiming that the bodies discovered in the remote cave in Southern Peru could be an entirely new species of hominid or even the remains of an ancient alien race on Earth.

Lab tests confirmed the bodies date back to between 245 and 410 AD.

However, the discovery came under scrutiny by scientists who say that the mummified remains were ‘altered’ to look like aliens.

Scientists said how the bodies were ‘created’ using mummified human remains, but Mr. Maussan said that those are wild claims since skeptics never even looked or analyzed the bodies.

Maussan made the claims after meeting British ufo researcher Steve Mera who visited Peru not long ago.

Speaking to Mr. Maussan, Mr. Mera said: “There has been a lot of international attention, but surprisingly it has been very quiet here in Peru.

“Do you believe the government has been trying to pressure, to maybe keep it quiet?

“You went to the Ministry of Culture to try to present your findings, can you tell us how that meeting went?”

Maussan responded saying: “The attitude of the government, the Ministry of Culture, is really to reject these findings, it is very disturbing… the real victim here is the truth.

“People around the world deserve the truth about this.

“They are trying to stop this, they are fearful this could be true and we will have to rewrite the books of history, everything we know could change and that is too fearful for many people.

“Even without the bodies, they are saying this is not true.

“This is physical evidence in the hands of society for the first time, and they want to take that away from us.”

According to Mr. Mera, its very “coincidental” that statements from Peruvian scientists and the government saying it was a criminal hoax were made just before Mr. Maussan and his team announced their preliminary findings at a press conference.

“They said it was all fake. How can they do that if they have not seen them?” wondered Mr. Mera.

“They did an event to declare our findings a hoax, a fraud,” responded Maussan who added:

“They have discredited it, but are doing it without laying a single finger on any of the bodies. How can they do that if they have not seen them?” concluded Mr. Mera.