New documentary shows how to build a Pyramid with ‘ancient...

Ok so yeah, there are many people around the world who believe that the Pyramids—specifically the Great Pyramid of Giza—was built by aliens, giants, giant aliens, and a long lost civilization.

At almost 140 meters high, it is estimated that the monument was completed around 2560 BC, boasting the privilege of being the tallest building on the planet until the completion of Lincoln Cathedral during the medieval era, which raised the record up to 160 meters.

However, an extremely thought-provoking video will probably change your mind, as it shows—apparently—how to build a Pyramid, using technology that was present on Earth more than 4,000 years ago.

It’s not a big deal, right?

A documentary presented by “Channel 4” delves into the mysteries of the Pyramids and tries to figure out just how ancient mankind managed to erect one of the most amazing ancient structures on the surface of the planet, thousands of years ago using relatively ‘limited’ technology.

Titled Egypt’s Great Pyramid: The New Evidence, the program dives into the mystery that has long surrounded the construction of Egypt’s Great Pyramid. However, new discoveries are revealing its secrets, as archaeologists uncover the last surviving relic of the pharaoh Khufu and Channel 4’s documentary takes a close look at the evidence. 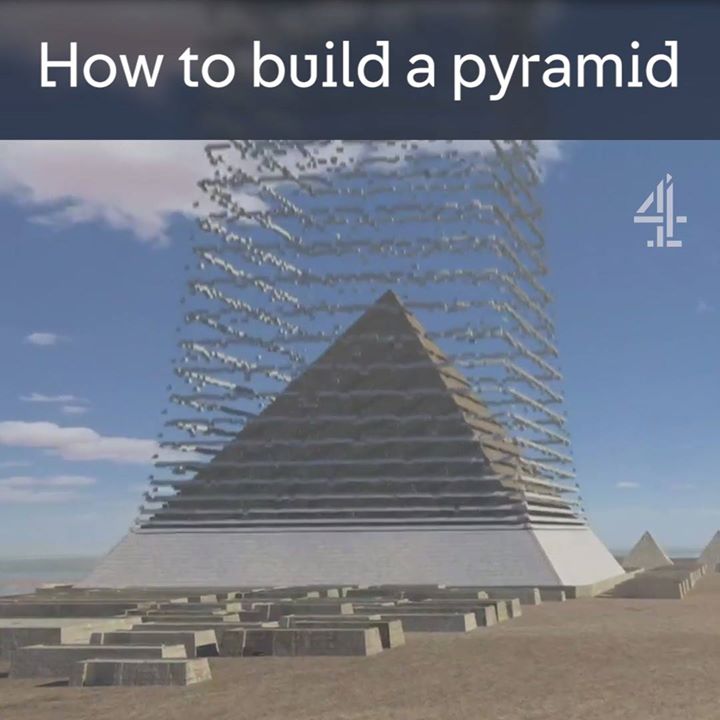 Considering that each of the approximately 2,300,000 stone blocks that comprise the Pyramid weighs two tons on average, how were the ancient builders able to transport such blocks from their quarries?

With what methods and with what technology?

These are some of the questions that have haunted archeologists for decades.

Two new discoveries appeared in recent years seem to have put a little light on explaining the transport system. The documentary presented by Channel 4 helps connect the dots between the latest discoveries about the pyramid and how it was built.

The Great Pyramid of Giza is the only one of the Seven Wonders of the Ancient World that still remains, and is one of the great monuments of history that is part of the world heritage due to its incredibly rich historic past.

The earliest text that indicated the methods of work used to build the pyramid came from the historian Herodotus of Halicarnassus who visited the pyramid in the year 450 BC. In Book II of his ‘Nine Books of History’, Herodotus states that he was told by Egyptian priests, that it took 20 years to build.

The historian also describes a supposed system of machinery used by the workers to raise the ashlars from tier to tier.

The most modern theories, such as the one of the French architect Jean-Pierre Houdin, expose, however, that the stones were transported by an outside ramp to a height of 45 meters. From there, the blocks were raised by another spiral ramp, mounted inside the pyramid itself.

Cost of the Pyramid?

This is one of the most interesting parts of the construction of the Great Pyramid that only a few talk about.

According to Live Science, even with cranes, helicopters, tractors, and trucks at our disposal, it would be tough to construct the Great Pyramid of Giza today.

Its construction 4,500 years ago is so astounding in some people’s eyes that they invoke mystical or even alien involvement.

But the current theory of the building of the Great Pyramid — the notion that it was assembled from the inside out, via a spiraling internal ramp — is probably still the best construction plan.

Following that plan, we could replicate the Wonder of the Ancient World for a cool $5 billion.