Professor Roger Penrose from the University of Oxford (UK) and Vaha Gurzadian from the Center for Cosmology and Astrophysics, Alikhanian National Laboratory and Yerevan State University, Yerevan, Armenia have published a cosmic map and identified the places in our universe where Advanced Super-Civilizations could have existed before the Big Bang.

In the scientific study, researchers examined the anomalies of the map of the Cosmic Microwave Background, which they interpret as evidence of the existence of technologically advanced societies of a time before the emergence of our universe.

In their revolutionary theory, researchers created a map and marked the existence of possible super civilizations with red dots on the map. They suggest that given the current data it is possible that they might have identified the long-lost habitat of super-civilizations that inhabited the universe before the Big Bang. 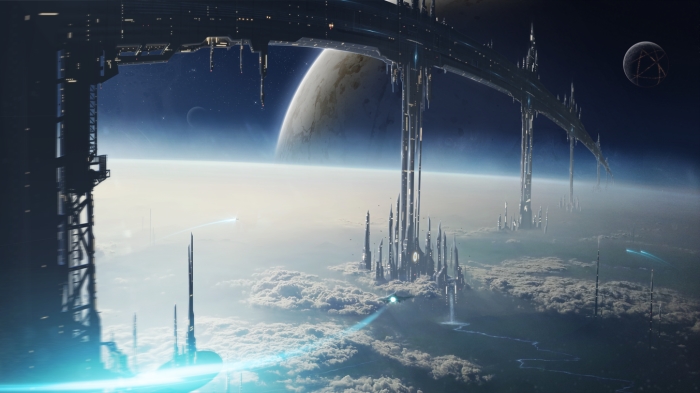 The two researchers raise interesting questions on the Fermi Paradox and numerous expectations that arise from it.  If our civilization wasn’t the first to have come into existence in our cosmic neighborhood, it is possible that many super advanced civilization predate our very own, preceding advanced life on our planet and technological development by thousands of centuries.

The researchers write in their study published on arxiv.org: “The so-called ”Fermi paradox” [1] refers to a puzzle that arises from an expectation that our own civilization is unlikely to have been the first to have arisen throughout our galactic neighbourhood, and if ours were not the first then, owing to the randomness involved in the timing of factors that lead to its development, the likelihood would have been that our civilization would have been preceded by others having an advantage of thousands of our centuries of technological development. The expectation, then, would be that such enormously advanced civilizations would have had ample opportunity to have either visited us or, at least, sent decipherable signals to us by now.”

According to the theory of cyclic cosmology proposed by Roger Penrose, the history of the universe is much more antique than what mainstream science believed for years and consists of a ‘chain’ of era’s.

First a giant black hole swallows the universe to store energy, after which we have the Big Bang which forms the border between the old and the new era. The two physicists propose that lost ‘Alien’ civilizations would be able to transmit information through the collision of black holes. 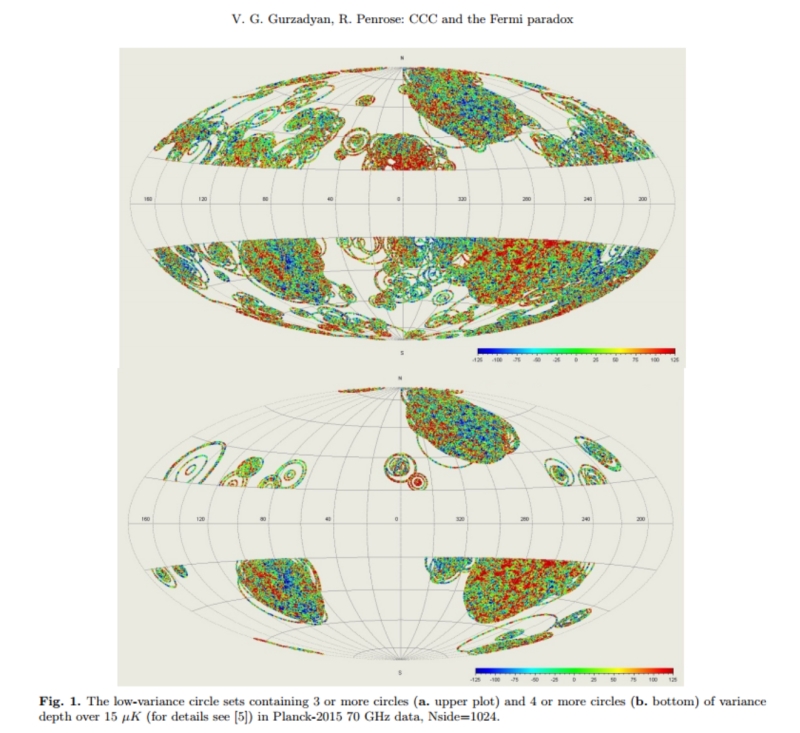 According to experts, the discovery of gravitational radiation waves certifies the existence of Supermassive Black Holes in the distant past, which consumed the universe and then exploited for the birth of a new system of galaxies. According to the theory proposed by Penrose and Gurzadyan a big bang meant the transformation of the entire mass of the universe into energy, which was accompanied by a change in the world. This suggests a cyclical development of the universe, where the two scientists propose one era (eon) is separated from the other Big Bang.

In their study, Professor Penrose and Gurzadian  write: „In accordance with this interpretation, we conclude that, according to CCC, there was an extremely large and very distant concentration of sources, shown in red in Figure 2 just below the equatorial excluded region, over on the right. Also, there was a comparatively close very large concentration of sources rather near the direction of the north galactic pole, just to the right of the picture. If we are to consider signals from previous-aeon beings, then such regions might well be the most promising places to look, as the CCC-interpretation would be that there might well have been vast numbers of very large galaxies in these places, and consequently a large probability of the development and long-term stability of highly evolved technological societies.” 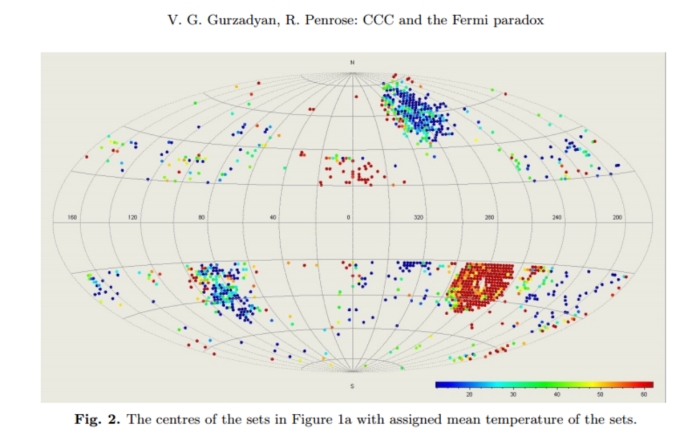 CCC and the Fermi paradox