Do yo think drones are the result od modern inventions? Well, it turns that over 100 years ago, in 1898, Nikola Tesla came up with the idea of ‘drones’. The man was truly ahead of his time.

Nikola Tesla, one of the greatest inventors of all times patented a drone in 1898, proving ahead of time he was.

Tesla believed that these ‘unmanned’ machines would end all wars.

As many people already know, Tesla’s inventions went far beyond electricity. He made groundbreaking discoveries such as wireless radio communications, turbine engines, helicopters(although it was Da Vinci who first had the idea), fluorescent and neon lights, torpedoes and the X-ray among others. By the time of his death, Tesla held around 700 worldwide patents.

However, many people believe Tesla has a couple of more obscure inventions, and his patent for ‘killer machine’ was one of them. In fact, Tesla did not just invent Killer Robots; he patented machines that he believed were so deadly that the idea of their use would bring about peace among mankind. 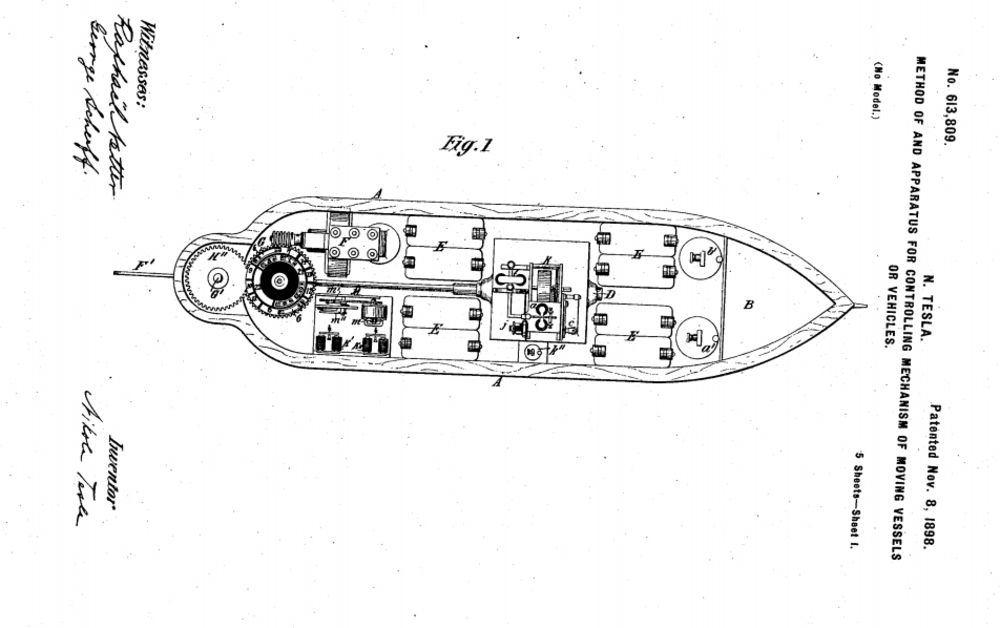 Here is an excerpt from his patent:

“Be it known that I, Nikola Tesla a citizen of the United States, residing at New York, in the county and State of New York, have invented certain new and useful improvements in methods of and apparatus for controlling from a distance the operation of the propelling engines, the steering apparatus, and other mechanism carried by moving bodies or floating vessels, of which the following is a specification, reference being had to the drawings accompanying and forming part of the same… The invention which I have described will prove useful in many ways. Vessels or Vehicles of any suitable kind may be used, like life, dispatch, or pilot boats or the like, or for carrying letters, packages, provisions, instruments, objects, or materials of any description, for establishing communication with inaccessible regions and exploring the conditions existing in the same, for killing or capturing whales or other animals of the sea, and for many other scientific, engineering, or commercial purposes; but the greatest value of my invention will result from its effect upon warfare and armaments, for by reason of its certain and unlimited destructiveness it will tend to bring about and maintain permanent peace among nations.”

From: “Specification forming part of Letters Patent No. 613,809, dated November 8, 1898.” The full original text and diagrams can be found at the U.S. Patent and Trademark Office website: http://patimg1.uspto.gov/.piw?docid=00613809&SectionNum=1&IDKe

Furthermore, Tesla notes in his patent that:

“In a broad sense, then, my invention differs from all of those systems which provide for the control of the mechanism carried by a moving object and governing its motion in that I require no intermediate wires, cables, or another form of electrical or mechanical connection with the object save the natural media in space. I accomplish, nevertheless, similar results and in a much more practicable manner by producing waves, impulses, or radiations which are received through the earth, water, or atmosphere by suitable apparatus‘ on the moving body and cause the desired actions so long as the body remains within the active region or effective range of such on currents, waves, impulses, or radiations.”

Even though Tesla failed to mention radio waves by their modern name since they were discovered in the 19th century, his ideas went on to shape the entire modern world of unmanned machines. From the Curiosity Rover on Mars, searching for Alien life, to toy drones used to photograph incredible landscapes, we owe it all to Tesla.

However, while Tesla was right about that would be needed to steer is ‘robots’, many believe he was wrong about their potential destructive power as Popular Science notes.

According to popsci.com., the first ever military drone, built for the sole purpose of war was the Kettering Bug.

Instead of using remote control, it was pre-programmed to fly a certain distance (it is also the ancestor of modern cruise missiles). Built for World War I, the bug was completed too late to see action, which is just as well, since in tests it was unreliable at best. (Source)