Physicist Says Our Universe Could Have Been Formed by a...

The idea isn’t as crazy as it may sound. What if there’s more to space and the universe than we are willing to even to consider? Looking back at the distant past of the universe, some 13.8 billion years ago we will reach a singularity: an incredibly dense, hot, energetic point where laws governing space-time breakdown. In other words, it’s a point where the laws governing our universe no longer apply. However, a singularity is also exactly what you find if you were to fly inside a black hole.

As much as we want to, e simply can’t look beyond that singularity to understand what caused our universe to form. However we do know where a singularity does exist, and that precisely inside a BLACK HOLE. According to an article written by physicist Ethan Siegel explains over at Forbes, black holes, singularities and the creation of our universe have a lot in common.

As Siegel explains it, from a mathematical perspective, there isn’t a single reason why the creation of our universe isn’t the result of a star collapsing into a black hole in a four-dimensional universe.

This theory was proposed in 2014 by theoretical physicists at the Perimeter Institute and the University of Waterloo in Canada. Even though many have tried to rule out this theory, no one has been able to do so.

According to their assumptions, the Big Bang or the great cataclysm that triggered the expansion of the cosmos, would have simply been the “mirage” projected in a three-dimensional world of the collapse of a star in a four-dimensional universe that by becoming a black hole, drove out the matter which gave birth to our universe. 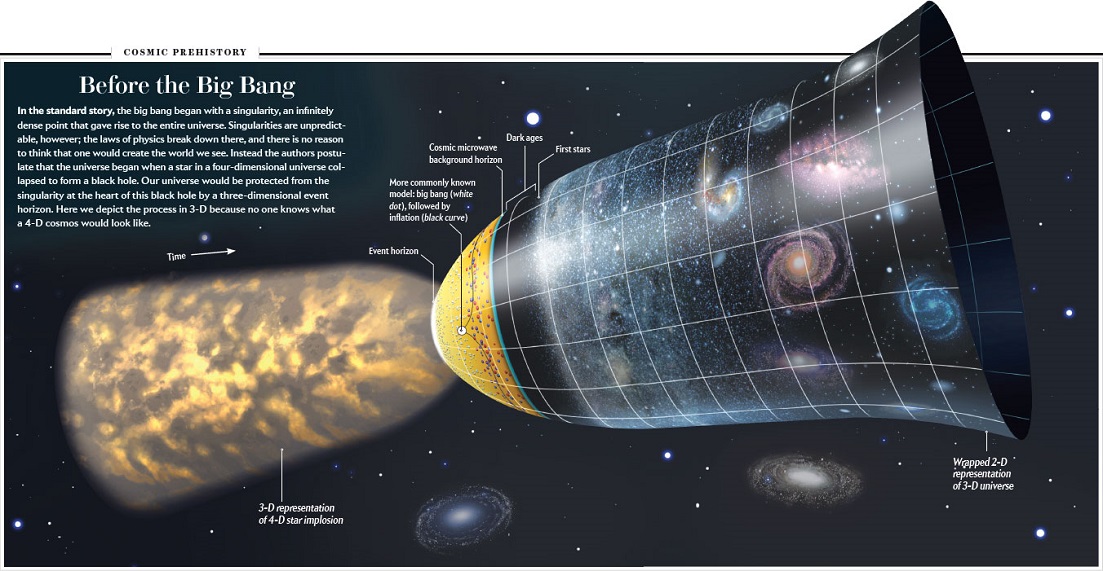 The Black Hole at the Beginning of Time. Image Credit.

What if it’s true and we actually own our existence to black holes?

Siegel explains that to the best of our understanding, the universe we live in is ruled by two points: quantum mechanics and general relativity. If we you go on and analyze it, black holes defy these rules since their event horizons –a boundary in space-time beyond which events cannot affect an outside observer— are much larger than can be explained by the behavior of the particles inside it.

“The fact that black holes in our Universe are much more massive than this isn’t a problem,” explains Siegel.

Mathematically speaking, everything that Siegel writes, and the theory proposed by theoretical physicists at the Perimeter Institute and the University of Waterloo in Canada makes sense.

Even though we can’t possibly calculate what happens inside a black hole’s singularity, we are able to find out what happens on the boundary of the event horizon and as Siegel explains it, it matches pretty well what happened at the birth of our universe:

“As the black hole first formed, from a star’s core imploding and collapsing, the event horizon first came to be, then rapidly expanded and continued to grow in area as more and more matter continued to fall in.

If you were to put a coordinate grid down on this two-dimensional wrapping, you would find that it originated where the gridlines were very close together, then expanded rapidly as the black hole formed, and then expanded more and more slowly as matter fell in at a much lower rate. This matches, at least conceptually, what we observe for the expansion rate of our three-dimensional Universe.”

Could Our Universe Have Arisen From A Black Hole?