This ancient site is home to megalithic stones which many researchers say are among the largest on the planet. Some of the megaliths here measure up to 26 feet long and weigh more than 100 tons each.

This incredible site was built thousands of years ago by an extremely advanced culture. Today, Puma Punku is considered a large temple complex or monument group that is part of the Tiwanaku Site near Tiwanaku, Bolivia.

Tiwanaku is significant in Incan traditions because it is believed to be the site where the world was created. Puma Punku signifies “The Door of the Puma.”

As noted by the Andean specialist, Binghamton University Anthropology professor W. H. Isbell, a radiocarbon date was obtained by Vranich from organic material from lowermost and oldest layer of mound-fill forming the Puma Punku. This layer was deposited during the first of three construction epochs and dates the initial construction of the Puma Punku at 1510 ±25 B.P.

Puma Punku is so unique in the way that it was constructed and shaped and positioned, that it is the most intriguing ancient site on the planet. Mainstream scholars believe the blocks found at Puma Punku were formed by hand with primitive stone tools. But some researchers point to the intricate stonework as evidence of the use of advanced precision technology.

How exactly could such primitive people, living thousands of years ago, have produced such flawless stonework? Is it possible that the ancient builders of Puma Punku have fabricated the megalithic stones with advanced technology? Precision tools that could have facilitated them to accomplish these marvels of engineering and construction, clean cuts, precise angles, would that be really possible without the aid of “modern” technology? Many people today find that quite unlikely.

If you look at the stones carefully, you can see some intricate stonework, as though they used machine tools or even lasers. It’s incredible.

At Puma Punku you will find these incredible stones with perfect right angles, and some stones have small drill holes which have been evenly spaced along this groove which makes you wonder whether or not it is possible that the ancient builders of Puma Punku used some sort of advanced machinery. 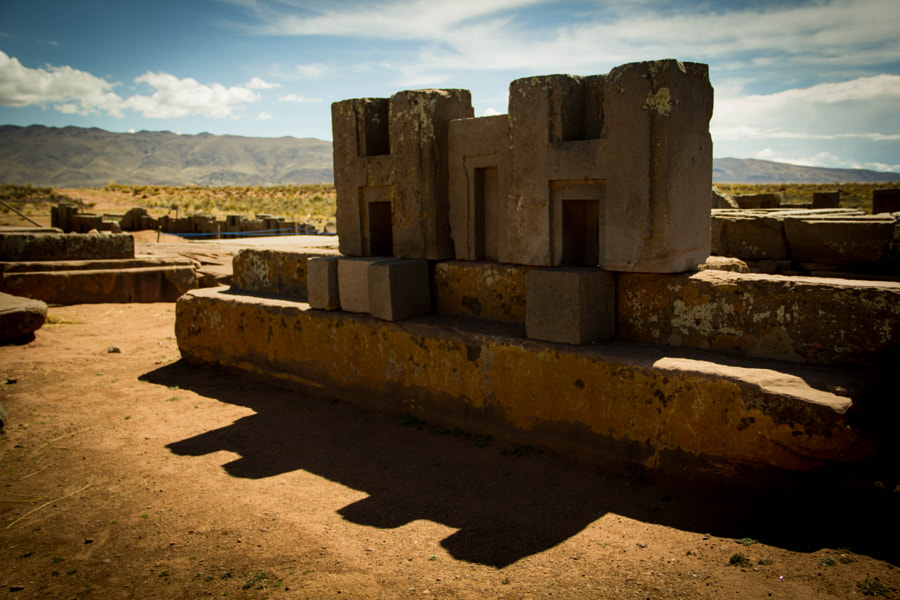 A transportational and logistical nightmare

After years of research, archaeologists have said the massive stones were hewn at quarries over 60 miles away and then rolled to Puma Punku on logs.

However, what we seem to forget here and what nobody talks about is the fact that the archaeological site of Puma Punku is located at an altitude of 12,800 feet. This means that it is located above the natural tree line so this means that NO trees grew in that area which means that no trees were cut down in order to use wooden rollers.

This brings us to the obvious question as to how did the ancient builders of Puma Punku transport huge blocks of stone to their destination? Sure, they could have brought logs from elsewhere, but that would have been a transportational nightmare at that time, and even a huge labor force would not have been enough for these massive stones to arrive at their destination.

We simply have too many questions about the technology used, transportation, logistics, etc…, and it is hard to believe that all of this was achieved without the use of power tools and advanced forms of transportation.

Moving these massive blocks of granite from their quarries and bringing them to Puma Punku would have required some type of advanced technology, means by which ancient cultures could have lifted these massive stones and placed them in their positions.

Puma Punku is simply put, one of those places where, when you look at those incredible constructions, manipulated with that much perfection, your imagination just fires up, there are so many possibilities at this point, and conventional archaeological explanations just do not suffice.

The right questions need to be asked, and there are so many mysteries that surround Puma Punku… from the materials used to aid them in the constructions… to the constructions methods and transportation of the blocks and the answer probably lies in front of us.

In 1549, while searching for the capital of the Inca Empire, Spanish conquistadors led by Pedro Cieza de León crossed into Bolivia and found the ruins of an archaeological site called Tiahuanaco. Less than a quarter mile northeast of Puma Punku, modern-day researchers believe Tiahuanaco was once the center of civilization with more than 50,000 inhabitants. 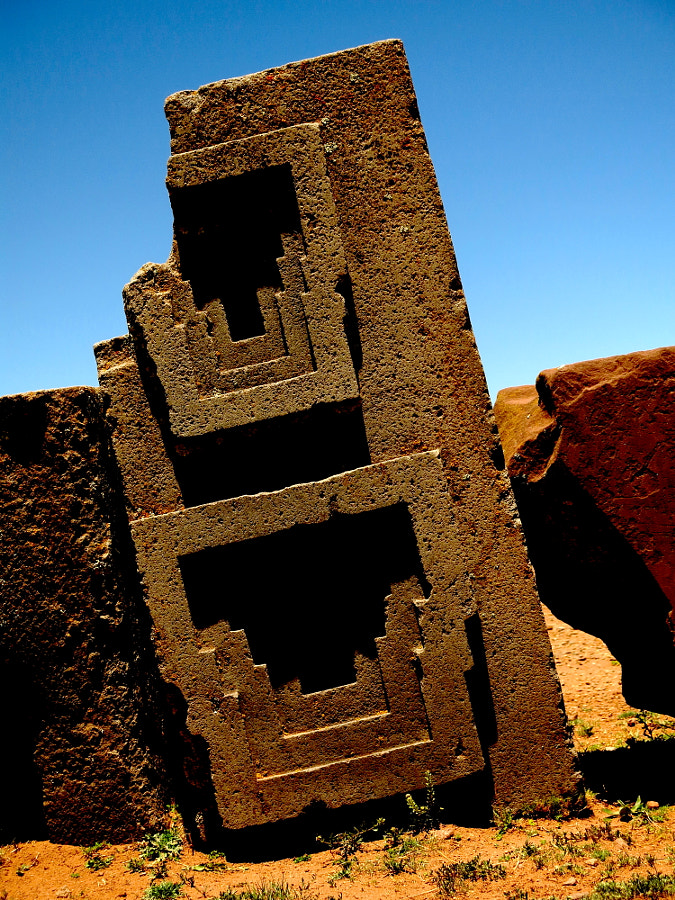 In fact, Tiahuanaco is probably the greatest American culture that many people haven’t heard of. It was one of the most important antecedents of the Inca and their history. The level of achievement in architecture, in political development, agriculture, industries was unlike anything found elsewhere in South America, and most scholars agree that Tiahuanaco was mysteriously abandoned around 1100 AD, for reasons we still do not know.

However, numerous excavations revealed a great amount of information about Tiahuanaco. In the 1960s, the Bolivian government excavated and unearthed the Subterranean Temple at Tiahuanaco.

Within the walls of the square sunken courtyard, researchers discovered hundreds of mysterious stone heads with a diverse range of features.

These mysterious places seem to represent every type and shape of human head existing on the planet. 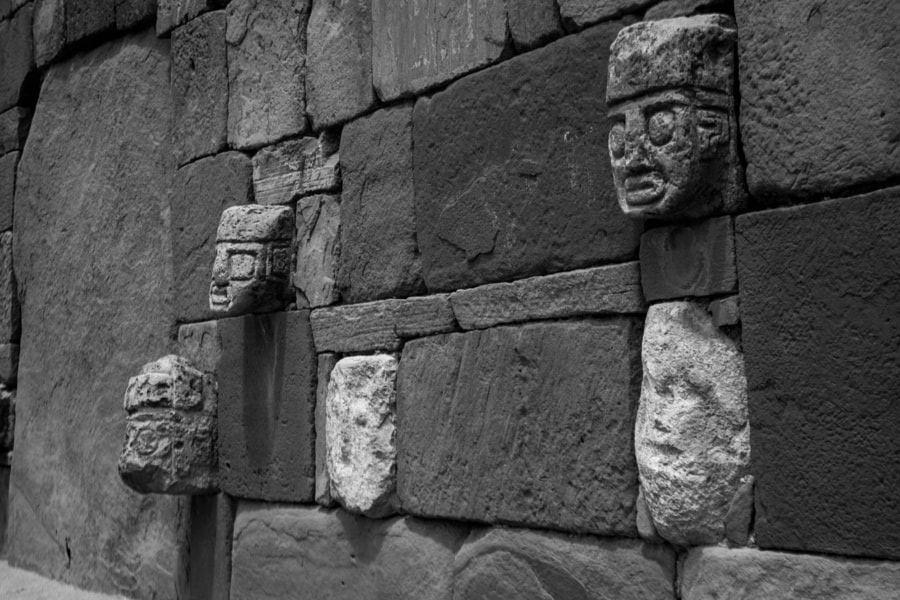 Two of them, which are very intriguing, were created in white in color, and they look very much like grey alien heads, say Ufologists.

A giant statue at the center of the sunken temple depicts the creator god, known as Viracocha. Curiously, Viracocha was depicted having many characteristics which are unlike those of the native population. This raises an interesting question; Why would the inhabitants of Tiahuanaco depict their most prominent god with features unlike their own?

For example, Viracocha was depicted having a beard and a mustache, something that is a very unusual thing because American Indians do not have beards and mustaches. So, who was Viracocha, and is it possible that there is more to him than what we have been led to believe?

One of the most fascinating archaeological artifacts ever discovered near Tiahuanaco is the famous Fuente Magna Bowl.

The artifact is a ceramic bowl, and it has written on its surface Sumerian cuneiform and Proto-Sumerian hieroglyphic script. This is a huge problem for mainstream scholars as these two civilizations were never connected and are located on the opposite side of the world. 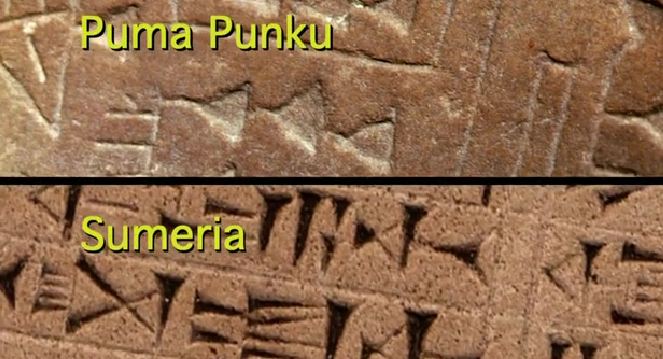 In fact, these two ancient cultures were separated by more than 8.000 miles, and yet the Fuente Magna Bowl draws a direct connection between the ancient Sumerians and Tiahuanaco, and Puma Punku.