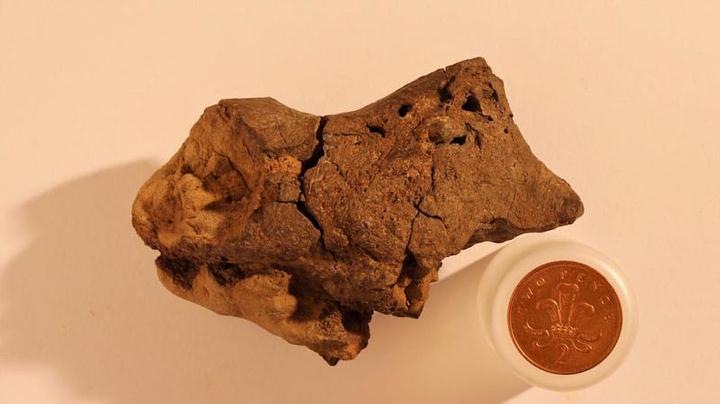 As it turns out, paleontologists have found the FIRST ever fossilized dinosaur brain which dates back a staggering 133 million years. To the surprise of researchers, the small fossil still contains blood vessels, cortex and part of the membrane that surrounds the brain.

“The chances of preserving brain tissue are incredibly small, so the discovery of this specimen is astonishing,” said co-author Dr. Alex Liu of Cambridge’s Department of Earth Sciences

A Dinosaur Fossil collector by the name Jamie Hiscocks discovered in 2004 what appeared to be –a fossil that at first glance—a big boulder. More than 10 years later, a team of researchers from Britain and Australia has found that this is the first fossilized brain of a dinosaur.

With the aid of technology – scanning electron microscope  — Paleontologists found that the fossil is extremely well preserved since it still contains the blood vessels and capillaries, cortex tissue, and even the meninges, the protective layers that attach the brain to the skull.

According to reports from the University of Cambridge, the fossilized brain is most likely from a species similar to Iguanodon: a large herbivorous dinosaur that lived during the Early Cretaceous Period, about 133 million years ago.

This is extremely surprising.

Experts indicate that the reason why this particular piece of brain tissue was so well preserved is because it was kept in a highly acid and lox-oxygen body of water, similar to a swamp, shortly after the dinosaur died.

This is the main reason why the soft tissue was able to ‘survive’ for so long as it became mineralized before it decayed away completely.

“What we think happened is that this particular dinosaur died in or near a body of water, and its head ended up partially buried in the sediment at the bottom,” said Norman. “Since the water had little oxygen and was very acidic, the soft tissues of the brain were likely preserved and cast before the rest of its body was buried in the sediment.”

“I have always believed I had something special. I noticed there was something odd about the preservation, and soft tissue preservation did go through my mind. Martin realized its potential significance right at the beginning, but it wasn’t until years later that its true significance came to be realized,” said paper co-author Jamie Hiscocks, the man who discovered the specimen. “In his initial email to me, Martin asked if I’d ever heard of dinosaur brain cells being preserved in the fossil record. I knew exactly what he was getting at. I was amazed to hear this coming from a world renowned expert like him.”

Paleontologists have underlined that high-resolution scanning techniques have confirmed something that experts believed in the past: Dinosaurs most likely had brains similar to birds and crocodiles.

This discovery has served as a very important reminder that experts need to be more careful and comprehensive with fossils they come across as they can never know for sure what is inside.