Researchers discover a previouly unknown figure among the Nazca lines

Researchers in Peru have discovered a completely new geoglyph, believed to be at least 2,500 years old at the famous Nazca lines. 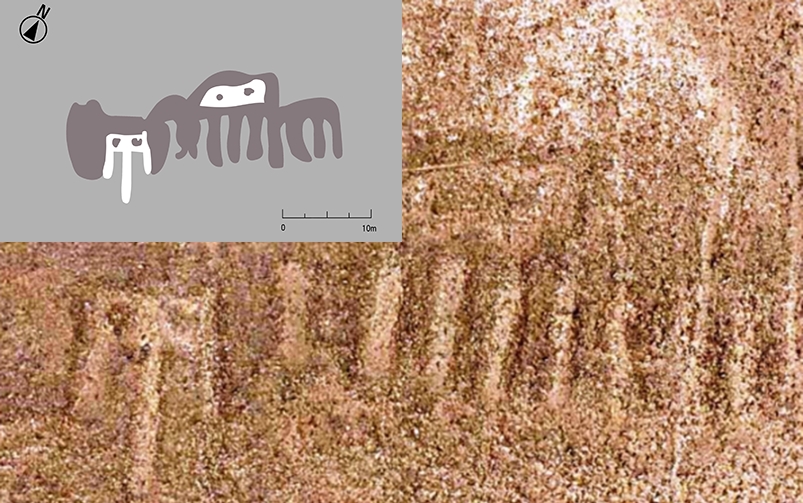 Check out our 20 Facts about the Nazca Lines

According to reports from Andina, researchers in Peru have found a previously unknown geoglyph at the Nazca lines in Peru. Discovered in the Pampa Majuelos region in the Nazca desert, the new Geoglyph –beleived to be over 2000 ears old—has highlighted the importance of the archaeological site both for tourists and archaeologists who have studied the site for decades.

Reports from National Geographic indicates that the new Geoglyphs is a 30-meter-long figure drawn on the arid desert floor, is believed to represent an animal with a freakishly large tong aid Masato Sakai, archaeologist of Japan-based Yamagata University, who leads the research along with his Peruvian counterpart Jorge Olano.

According to Andina-com, the ancient architects of the lines created the figurines by the careful removal of stones, which they used afterwards to create the figures by pilling them up. This technique is believed to date back qat least 2,000 years said, Masato Sakai.

The left side of the figure depicts a head with a long tongue while the right side —which stood out in high relief and had some spots— might reveal the body and legs.

Professor Sakar believes that the figure does not represent a real being, but was rather an imaginary image created by artists over 2,000 years ago. The scientist also recalled that several other figures were discovered five years ago when experts discovered two anthropomorphic figures illustrating what appeared to be a decapitation scene.

“Taking into account there is an ancient path, between the two geoglyphs, heading to the Cahuachi ceremonial site, we might say the figures are linked to a pilgrimage way to such religious place,” he noted.

Scientists have tried for decades to uncover the purpose of the Nazca Lines. Some researchers have argued the Nazca lines form a labyrinth. Others have said the lines and figures matched up with the constellations in the sky, or that the Nazca Lines were part of an ancient pilgrimage route. The ancient Nazca culture was an extremely sophisticated prehistoric culture that implemented numerous advanced engineering techniques to bring underground water to the surface for irrigation. Some of the theories about the Nazca glyphs are said to be deeply connected with their irrigation methods. More controversial theories link the Nazca lines with otherworldly visitations and extraterrestrial beings that according to many could have been the reason why the Nazca people drew over thousand figures in the arid desert plateau of modern-day Peru.

Researchers believe that today, there are over 800 straight lines, 300 geometric figures and 70 animal and plant designs, also called biomorphs. The largest figure found at Nazca stretches about 200 metres across. According to archaeologists, these mysterious drawings were created by the Nazca people. The Nazca people flourished in the region between the 1st and 8th century A.D. The lines were formed by the careful removal of the reddish iron oxide pebbles that make up the desert surface. Some scholars have discovered curious patterns in the numerous designs and they suggest that the Nazca might be one of the earliest known examples of applied geometry. The most famous of the Nazca glyphs are  The Hummingbird, The Condor, The Heron, The Astronaut, The Spider, The Pelican, The Dog, The Hands and The Monkey.