Researchers have confirmed the discovery of an 115-centimeter-long Dinosaur Footprint in Bolivia, which makes it the largest ever found to date. 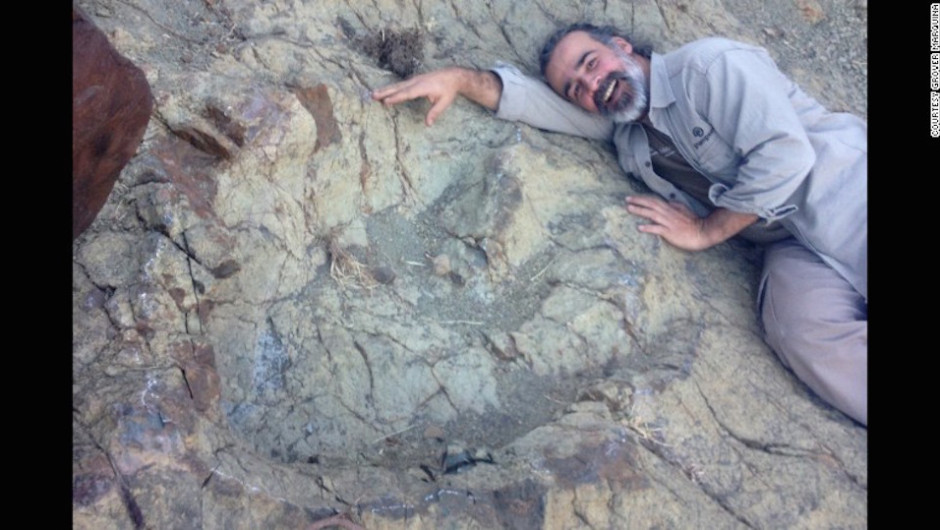 Imagine that those flesh-eating dinosaurs were still alive today, it would mean that not only would we need to be worried about their extremely sharp teeth, but their large bodies as well.

Researchers have recently discovered a footprint of a dinosaur in Bolivia, and it turns out that it is the largest footprint ever found on Earth, left behind by a carnivorous dinosaur millions of years ago.

Until now the biggest Dinosaur footprint of a carnivorous dinosaur measured 110 centimeters and was found in New Mexico, according to paleontologist Sebastian Apesteguia.

However, everything changed when Grover Marquina, a tour guide, went hiking in the crater Maragua, about 65 kilometers from Sucre, Bolivia’s capital when he stumbled upon a massive fossilized footprint.

Usually, these types of footprints are between 85 and 100 centimeters.

speculate that the massive footprint discovered by the tour guide in Bolivia may have belonged to a humongous dinosaur, part of the Abelisaurus family.

The predators referred to as Abelisaurus were two-legged beasts that lived about 70 million years ago.

With a monstrous and powerful Jaw, the height of this Dinosaur exceeded 12 meters. However, it has atrophied arms and features to rival the best known and famous of its kind: the Tyrannosaurus Rex, or maybe even a large raptor called Megaraptor – a fierce creature that was identified before in the region of Patagonia.

Interestingly, not only is this mark the biggest footprint ever found to date, but it also challenges a scientific belief about these prehistoric creatures that existed in South America during the Cretaceous period, which is known as the last part of the ” Dinosaur Era .”

Researchers claim that this discovery helps understand that these monstrous dinosaurs lived in the last part of the period, something that scientists were not aware of.

Experts still believe that Dinosaurs were wiped from the surface of Earth when a massive Asteroid struck the planet some 66 million years ago.

According to paleontologist Sebastian Apesteguia, finding similar footprints in the region is quite common.

Experts claim that fossilized prints dating to the early Cretaceous period have been discovered in Bolivia, and smaller ones have also been seen in Chile, Brazil, and Argentina