Researchers investigating Oak Island, one of the most mysterious areas to the south shore of Nova Scotia have made one of the most important historical discoveries of the century after finding a ceremonial sword and what is believed to be a Roman shipwreck which suggests that ancient mariners visited North America a thousand years before Columbus did, changing everything we have been told in history books.

Published in the Boston Standards and exclusively revealed by Johnston Press, this incredible finding was involved in the History Channel’s series Curse of Oak Island which narrates the efforts of two brothers from Michigan as they explore Oak Island trying to discover historical artifacts which are said to be concealed on the Island.

Lead researcher J. Hutton Pulitzer who stars in the history channels series Curse of Oak Island which is now in its third season, has written a paper on the finding with a group of scholars from the Ancient Artifact Preservation Society, scheduled to be published in full in early 2016.

According to Pulitzer, the sword has been ‘100 per cent confirmed’ and is literally described as the ‘smoking gun’ to his theory.

Finding a Roman Sword and what is believed to be a shipwreck is something you don’t come across every day, and the fact that this discovery will change history as we know it makes this finding even more extraordinary.

“The sword came out of that shipwreck,” he said. “It is one incredible Roman artifact.”

According to the Boston Standard, Pulitzer explained: “Some years ago, a man and his son were scalloping off Oak Island, which sees them hang rake-like object off the back of their boat. When they brought this up, the sword came up with it.

“They thought they were going to get into trouble due to restrictions in Nova Scotia which made all private shipwreck diving for treasure outlawed. So they freaked out about it.

“The father kept it for decades, and when he died it went to his wife, then his daughter. Then when she died many years later it went to her husband. It was he who came forward to the island and said ‘I think you should know about this and where it was found.”

Pulitzer believes that the metallic properties of the sword are identical to other ancient Roman artifacts, suggesting that the sword is one hundred per cent authentic.

In an interview with the Boston Standard, Pulitzer explains:

“I began my forensic work into it using an XRF analyzer – which is a leading archaeological tool for analyzing metals.”

“And we found all these other metals that tell you this was made from ore that came directly from the ground. It has the same arsenic and lead signature in it. We’ve been able to test this sword against another one like it and it matches. This goes against everything we have been taught.” (source)

The fact that a Sword and the remains of a Roman shipwreck have been found raises numerous questions to what else could be out there. Divers have still not investigated the ancient shipwreck.

According to reports, there are thousands of unexplored shipwrecks off the coast of Nova Scotia, and the vast majority belongs to vessels that date back to the 18th and 19t century. 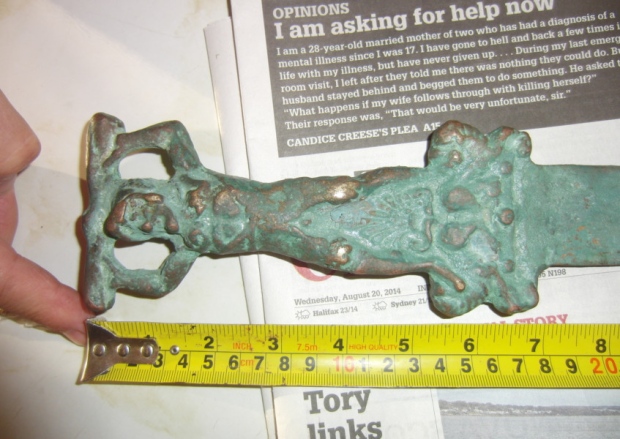 “The shipwreck is still there and has not been worked,” said Pulitzer. “We have scanned it, we know exactly where it lays, but it will be a touchy thing for the Nova Scotia government to allow an archaeological team to survey it. We know beyond a shadow of a doubt that it is Roman.

“I think this is the single most important discovery for the Americas – an event that will re-write history. They will talk about it very briefly on Curse of Oak Island but something like this shouldn’t be a footnote in a TV show – this is a gunshot to be heard around the world. It changes all of our history on this side of the pond.” (source)

Pulitzer believes that mainstream scholars tend to dismiss such finding because as many other things, discoveries like this go directly against historical mainstream patterns. Pulitzer said at these findings are most commonly dismissed by ‘experts’ by suggesting artifacts that do not conform to the orthodoxy must have been dropped by collectors in more modern times.

“That’s how they poo-poo having to talk about it,” Pulitzer says. “But it’s a pretty blatant Roman artifact. The knee-jerk reaction was to think somebody put that sword there. It was found incredibly close to Oak Island in water only 25ft deep. But if you dropped that rare collectors’ sword overboard, wouldn’t you dive down to get it?”

To draw connections between the mysterious shipwreck and the ancient Roman sword, Pulitzer and his team examined the area where the discovery was made, and found quite a few interesting details. Apart of the archaeological discoveries, Pulitzer and his team went and researchers the Indigenous natives of Nova Scotia the Mi’kmaq people who inhabit the lands of Nova Scotia for over 8000 years.

“The Mi’kmaq carry the rarest DNA marker in the world which comes from the ancient Levant (the eastern Mediterranean). You can’t screw with DNA,” said Pulitzer

Apart of the DNA markers, the report details numerous Mi’kmaq petroglyphs on cave walls and boulders in Nova Scotia and some of these depict what Pulitzer and his team believe are Roman legionaries marching with their Swords.

In the interview Pulitzer noted that: “There are also 50 words in the Mi’kmaq language which are ancient nautical sailing terms used by ancient mariners from Roman times – but they were not a seafaring culture.

“Another very interesting ‘coincidence’ is a bush on Oak Island and one on the mainland which is listed in Canada as an invasive species (Berberis Vulgaris). “This was used by ancient mariners, including Romans, to season their food and fight scurvy. It grows in Oak Island and across the way in Halifax. All these things, signs and symbols add up to more than just coincidence.” (source)

According to Pulitzer, the mystery surrounding Oak Island is more mysterious than ever. Pulitzer suggests that two carved stones on Oak Island ‘possess a language from the ancient Levant, but there are archaeological discoveries that have been made in the past that complete the recent discovers. For example in 1901, a Roman legionnaire’s whistle was unearthed in Nova Scotia, a metal ‘boss’ from the center of a Roman shield was unearthed in Nova Scotia in the 1800’s, and we cannot omit the small Roman head sculpture found in Mexico City in 1933 under a pre-colonial building dated to between 1476 and 1510.

Pulitzer says, with the new discoveries and modern science, it’s time these findings were taken seriously.

“When you put all these things together and you look at the anomalies, it’s not a coincidence,” he says. “The plants, the DNA, the artifacts, the language, the ancient drawings – you have something that deserves to be taken seriously.

“We have absolutely been lead to believe that nothing happened on this side of the pond before Christopher Columbus. That’s a church-induced concept. All the ancient records that exist make it very clear the world was circumnavigated and the world was round.”

Its time to take ‘mainstream sciences” to the next level and start thinking differently when it comes to discoveries like this, remember that all of us write history, history does not write itself.

Thanks to our Facebook Fan Joe Sanchis for pointing the discovery out to us!