Scientist claims Crop circles are ‘alien messages from the future’

A scientist who has a Ph.D. in chemistry from the university Caltech, in Pasadena, California claims that Crop Circles are Alien messages and crop circles have helped mankind leading to “at least one major breakthrough the discovery of a more advanced binary code than our computers currently use”.

Crop circles are a global phenomenon. Not only have crop circles appeared all around the planet, so far, there are quite a few of these strange appearances that have never been explained.

While some crop circles are just elaborate hoaxes, created by pranksters or ‘crop circle artists’, there are some which carry a mysterious message according to some.

Crop circles have been a subject of debate among researchers and UFOlogists for years. Richard Dolan, historian, academic, author and one of the world’s leading UFO researchers said that “Some of these formations are so immense and complex as to defy reason. And after all, these decades, none of the perpetrators have been caught in the act of making any of the truly extraordinary formations.”

Interestingly, according to estimates, crop circles appear at least every week somewhere on our planet, and contrary to popular belief, crop circles are not exclusive to recent decades. Reports of mysterious formations in fields have been reported for centuries.

Now, a scientist from the Caltech, in Pasadena, California, Dr. Horace Drew who has studied the phenomenon for years claims to have discovered the alien message behind these enigmatic formations.

Dr. Drew has spent over 20 years researching crop circles and claims that there are hidden messages—from several alien civilizations—embedded inside crop circles, as an attempt to communicate with mankind.

Furthermore, Dr. Drew explains that mankind has not been able to understand them since we are not advanced enough. Dr. Drew believes some crop circles are literally images from the future.

Dr. Drew, who know resides in Australia said: “When humans want to talk with dolphins we put little bubble circles under the ocean with a generator. We watch the dolphins come up and play and investigate, and we study them.”

“US Presidents have never said to a dolphin ‘take me to your leader, I want to sign a treaty with you’ and the extraterrestrials are not interested in making a treaty with us. They are ahead of us like we are ahead of the dolphins and the whales.”

Dr. Drew also claims that crop circles have helped mankind leading to “at least one major breakthrough the discovery of a more advanced binary code than our computers currently use”.

During a conference at the UFO and Paranormal Research Society in Australia, Dr. Drew said that there are some crop circles which could be messages from mankind from the future.

On the other hand, Nick Pope former employee of the Ministry of Defense, who currently is a journalist and UFO researcher claims that Crop Circles are anything but alien.

Speaking about the phenomenon Mr. Pope said: “It was soon clear to me that while these patterns were often stunning and intricate, they were made by people.

“Some of these hoaxers plan their patterns on computers, navigate by GPS and wear night vision goggles.

“An extraterrestrial civilization is unlikely to travel halfway across the cosmos, only to start making patterns in crop fields.” 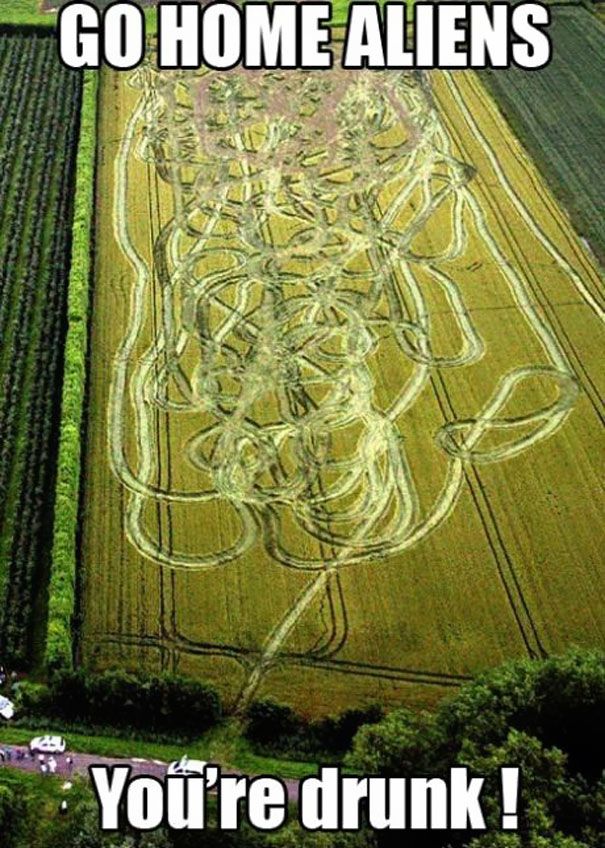 According to historian Greg Jefferys: “The number of circular features that can be reasonably confirmed as crop circles that have been so far found in the survey of the currently available 1945 Google Earth overlay numbers about one dozen. As this survey did not include more than 35% of England and excluded the known crop circle ‘hot spots’ around Wiltshire the findings are consistent with an annual occurrence of around 100 crop circles across the English countryside in 1945. This, combined with a significant body of historical records describing crop circles, gives the lie to the claims made by various to be the originators and creators of all crop circles. This, in turn, begs the question ‘If not them, then who or what is responsible for the creation of crop circles?'” (source)

Who know, maybe after all… there’s something odd about these crop circles and its really E.T. trying to tell us something.