Scientists conclude: The ‘Star of Bethlehem’ was not a star 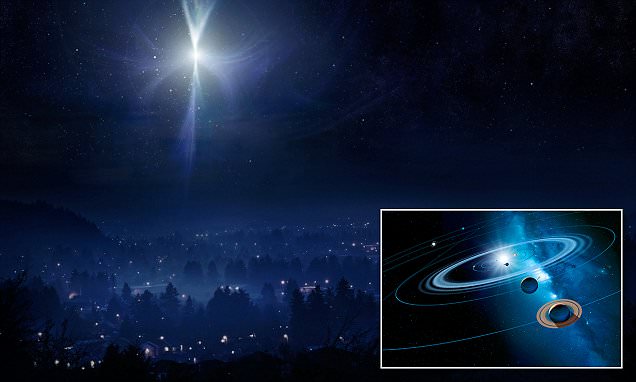 For hundreds of years, experts in different fields have been left perplexed by the origin behind the famous ‘Star of Bethlehem,’ the heavenly symbol that helped the Magi reach newborn Jesus. Commonly known as the ‘Christmas Stat’ now experts believe it may not have been a star after all.

To get to the bottom of the mystery, experts studied a number of historical, astronomical and biblical records, coming to the conclusion that the event which took place in 6BC was in fact an extremely RARE planetary alignment, where our Sun, Jupiter, the Moon and Saturn were position in the constellation of Aries.

One of the researchers who took part in the study is Grant Mathews, professor of theoretical astrophysics and cosmology in the Department of Physics at the University of Notre Dame.

‘Astronomers, historians, and theologians have pondered the question of the ‘Christmas Star’ for many years.’

‘Where and when did it appear? What did it look like? If the billions of stars out there, which among them shone brightly on that day so long ago?

‘Modern astrophysics is how we attempt to explain one of history’s greatest astronomical events.’

Furthermore, scientists revealed that during this rare planetary alignment in 6 BC, Aries was the location of the vernal equinox.

Experts concluded that this phenomenon for the Magi –aka Three wise men or Three Kings— would have symbolized the birth of Jesus Christ.

Mathews explains that Jupiter and the moon may have represented the birth of a ruler with a special destiny, and Saturn was the symbol of giving life.

‘The Magi would have seen this in the east and recognized that it symbolized a regal birth in Judea,’ ultimately leading them in search of the newborn ruler, Mathews said.
This cosmic event is EXTREMELY RARE. In fact, the event is so rare that a similar alignment will happen in 16,000 years. However, even then the vernal equinox would not be located in the constellation of Aries.

In fact, experts calculated that 500,000 years into the future, no alignment like the one known as the Christmas Star would occur.