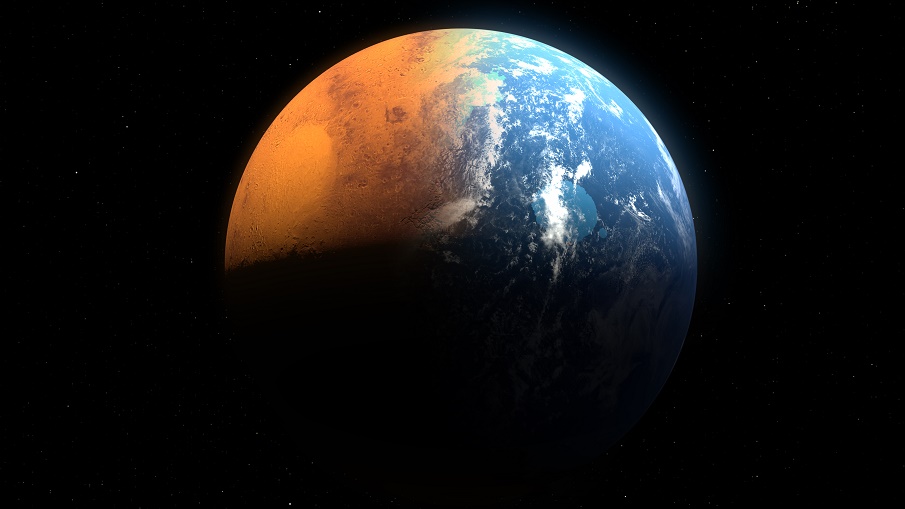 Scientists at NASA have said that the “MAVEN spacecraft has made the first direct detection of the permanent presence of metal in the ionosphere of a planet other than Earth.”

NASA’s MAVEN spacecraft has made an unprecedented discovery as it spotted traces of iron, magnesium and sodium ions in Mars’ upper atmosphere. MAVEN– Mars Atmosphere and Volatile Evolution Mission—orbits the planet gathering data along the way on how Mars lost most of its air, oceans, and atmosphere transforming from a planet eerily similar to Earth to desolate wasteland we see today.

Astronomers have concluded—based on yet another discovery—that Mars is more Earth-like than we ever thought.

NASA has revealed that the red planet is the ONLY other cosmic body in our solar system to have METAL in its atmosphere.

MAVEN—a spacecraft specifically designed to study the atmosphere of Mars—has revealed that there are traces of metal in Mars’ upper atmosphere, and it’s an extremely important discovery that shows just how Mars is a planet that eerily resembles Earth.

Joseph Grebowsky of NASA’s Goddard Space Flight Center in Greenbelt, Maryland said: “MAVEN has made the first direct detection of the permanent presence of metal ions in the ionosphere of a planet other than Earth.”

So how did metal end up in Mars’ atmosphere?

According to scientists, the answer is not ALIENS.

Experts from NASA’s Goddard Space Flight Center in Greenbelt explained that the metal found in Mars’ atmosphere comes from a constant shower of tiny meteorites onto the planet.

Scientists say that as high-speed meteorites crash against Mars’ atmosphere, they evaporate.

The team found that the metal ions behaved differently on Mars than on Earth. Earth is surrounded by a global magnetic field generated in its interior, and this magnetic field together with ionospheric winds forces the metal ions into layers. However, Mars has only local magnetic fields fossilized in certain regions of its crust, and the team only saw the layers near these areas. “Elsewhere, the metal ion distributions are totally unlike those observed at Earth,” said Grebowsky.

Metal atoms in the vapor trail get their electrons torn away by charged atoms and molecules in the ionosphere, the metal atoms transform into electrically charged ions.

Grebowsky explained, “Because metallic ions have long lifetimes and are transported far from their region of origin by neutral winds and electric fields, they can be used to infer motion in the ionosphere, similar to the way we use a lofted leaf to reveal which way the wind is blowing.”

According to experts, understanding Mars’ ionospheric activity is helping experts understand how the Martian atmosphere is escaping into space.

So far, MAVEN has picked up traces of iron, magnesium, and sodium ions in the upper atmosphere. These elements were detected over the last two years with help of its Neutral Gas and Ion Mass Spectrometer instrument.

Grebowsky said: “We detected metal ions associated with the close passage of Comet Siding Spring in 2014, but that was a unique event and it didn’t tell us about the long-term presence of the ions.”

Furthermore, scientists have explained that interplanetary dust—which causes the meteor showers—is vrey common in our solar system so its very possible that all planets and moons—with substantial atompsherers—have traces of metal. That of course, is still a theory.

“Observing metal ions on another planet gives us something to compare and contrast with Earth to understand the ionosphere and atmospheric chemistry better,” said Grebowsky.

Source: NASA’s MAVEN Reveals Mars Has Metal in its Atmosphere