A great ethical debate surrounds the possibility of giving life through cloning techniques to historical characters. While some claim that it cannot be ethical in any way to artificially reproduce human life, others believe that the possibility of bringing back great minds from the past could help solve many of the problems that plague humanity today. 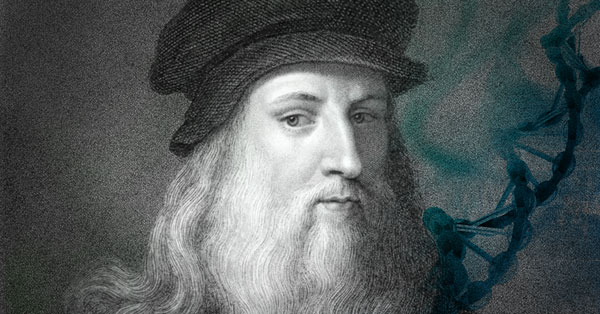 Leonardo da Vinci was an Italian Renaissance polymath: painter, sculptor, architect, musician, scientist, mathematician, engineer, inventor, anatomist, geologist, cartographer, botanist, and writer. He is considered one of the most brilliant minds the world has ever known. His visions and deeds were far beyond of those of men in his time and most of our technology can be credited to him; he is known as a universal genius. Even thought da Vinci was an inventor way ahead of his time, Leonardo da Vinci was and is, renowned primarily as a painter. Leonardo’s most famous painting of the 1490’s is considered to beThe Last Supper; many claim that there are hidden meanings inside this painting. It is also considered the most reproduced religious painting of all time.

The exact location of the remains of the inventor, Vinci remains a mystery. In 1863 it was reported that his tomb had been found, the contents of which were transferred to a church in the village of Amboise, France; the technology of the time, however, did not allow for experts to corroborate the veracity of the finding.

Not long ago, a team of Italian historians announced the discovery of a series of lost relics, belonging to Da Vinci, which could include DNA of the great renaissance genius.

If this is proven, science would be in a position not only to finally end the mystery behind the fate of the inventor’s remains but also eventually clone the great genius of the Renaissance age.

Cloning an organism requires the use of just a gene, which DNA sequence can be replicated, according to the University of Utah.

A great ethical debate surrounds the possibility of giving life through cloning techniques to historical characters. While some claim that it cannot be ethical in any way to artificially reproduce human life, others believe that the possibility of bringing back great minds from the past could help solve many of the problems that plague humanity today.

According to HealthAim, to date, cloning has been done in animals. Boyalife Group, a company in China, is leading the construction of the largest cloning factory in the world, which will later this year be used to clone cows, dogs, and other animals.

Boyalife also claims it can clone humans. However, public disapproval is preventing the company from making human replicas.

“The technology is already there,” Boyalife Chief Executive Xu Xiaochun said in relation to human cloning, reports Top Secret Writers. “If this is allowed, I don’t think there are other companies better than Boyalife that make better technology.”

In 2016, experts said that by carefully examining the paintings and notebooks which belonged to the Renaissance genius, they could maybe find hairs or flakes of skin from which traces of DNA can be extracted. This would allow scientists to determine some of the physical characteristics, like da Vinci’s eye color, the tone of his skin, and even the shape of his face.

Rhonda Roby, a geneticist on the project, told Gizmodo that “there’s a possibility of biological material inside paintings,” but “the challenge would be actually getting that material out without damaging the artwork.”

Jesse Ausubel, the vice chairman of the Richard Lounsbery Foundation said in an interview with the Daily Telegraph that “It is well known that Leonardo used his fingers along with his brushes while painting, some prints of which have remained, and so it could be possible to find cells of his epidermis mixed with the colors.”

Da Vinci died on 2 May 1519, while in the service of Francis I of France, and was originally laid to rest in the chapel of Saint-Florentin at the royal Chateau d’Amboise in the Loire Valley.