Huge Glow seen in the Sky before a massive explosion...

A mysterious crater in Siberia has grown 15 times its original size since a huge explosion and bright lights were reported in the Area.

In 2013, a huge crater opened in a remote area in Siberia, Russia. Since it mysteriously appeared three years ago, the crater has increased in size more than 15 times. Researchers remain baffled unable to explain its origin. The infamous Taimyr crater is located 300 miles from similar newly-formed holes. The region has been dubbed as the ‘End of the World’ by residents.

Three years ago a mysterious crater appeared on the Taimyr peninsula in Siberia, creating a staggering 300-feet hole in the surface of the Earth. Since it appeared three years ago, the crater has grown 15 times its original size.

“Since the crater was formed in a 2013 blowout, the crater’s size rapidly increased at least 15 times during the next year and a half, according to previously unreported scientific data.” (Source)

In three years, scientists have proposed a number of theories trying to explain why caused the mystery crater to appear and why it has been increasing in size for the past couple of years. The appearance fo the bizarre hole in the surface of the planet has prompted all kinds of theories ranging from gas leakage, missiles, underground bases, and aliens.

However, it seems that the mystery behind the enigmatic hole just got a lot more bizarre as a Russian expert revealed that residents have reported hearing an explosion and saw a ‘clear glow’ in the sky.

When the first crater emerged three years ago, debris of displaced oil, dirt, and ice was ejected across an area over half a mile wide. Researchers have attributed the appearance of the enigmatic ‘hole’ to explosions of methane or other types of underground gas. 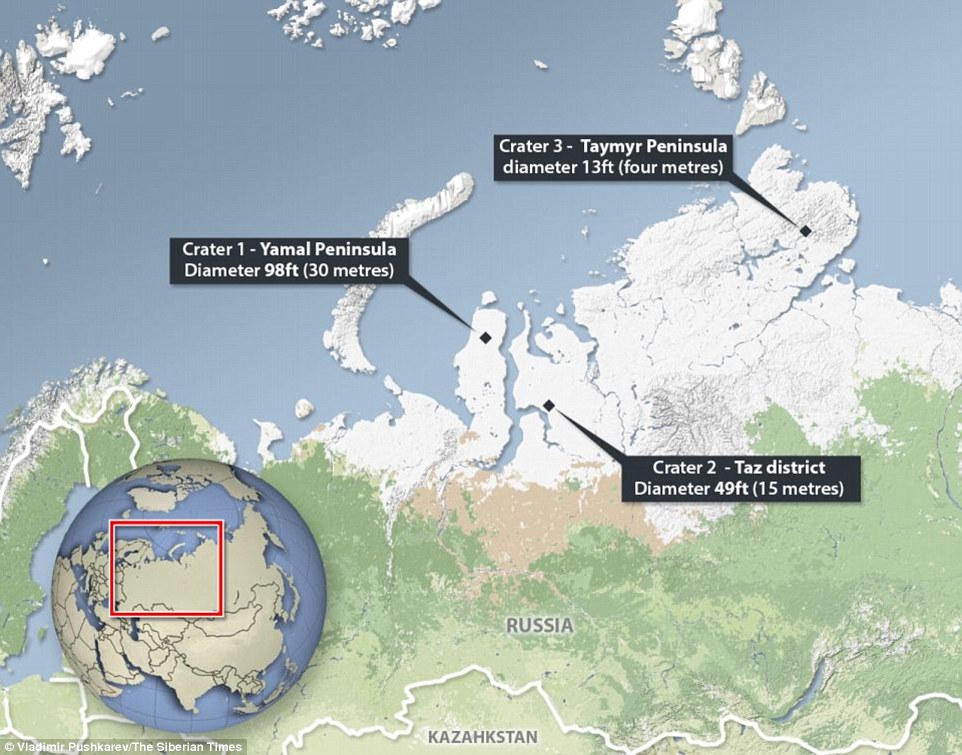 The crater grew in size rapidly as researchers watched with amazement trying to come up with reasonable theories that would put an end to the gigantic mystery. Given explanations are not satisfying.

Now, according to reports from leading experts who explore the region, there are numerous reports of witnesses who claim to have seen bizarre lights in the sky.

In an interview with the Siberian Times, Dr. Vladimir Epifanov said: ‘There is verbal information that residents of nearby villages – at a distance of 70-100 km – heard a sound like an explosion, and one of them watched a clear glow in the sky. It was about one month after the Chelyabinsk meteorite.

Locals firmly believe that what they witnessed in the sky is connected with the mysterious appearance of the gigantic whole. Some speculate that the phenomenon could be attributed to space debris exploding, but researchers don’t seem to agree.

The Siberian Times reports that earlier accounts of the appearance of the giant crater offered little help and that ‘It is not like the work of men, but it also doesn’t look like a natural formation.

And while leading experts suggest the mystery crater is caused by rapid climate change around the world, many experts disagree.

According to The Siberian Times, Dr. Epifanov has a different explanation for the Taimyr eruption, suggesting it originated at a depth that means it could not be linked directly to climate change, namely the degradation of gas hydrates some 500 metres below the surface, releasing methane which accumulated at a depth of 100 metres.

But many people in Siberia believe the mystery holes are connected to other supernatural events know to occur in the area, as locals have reported seeing a countless number of mysterious lights and orbs in the sky. Some have even ventured out that the craters are seen in Siberia aren’t the result of natural processes, but were created by UFOs.