Spanish researcher Manuel Cuevas claims to have found Atlantis, the mythical city/state described in the texts of the Greek philosopher Plato, near the Doñana nature reserve, located in Andalusia, following evidence based on satellite images taken from the region. Cuevas firmly believes that Andalucia was home to the great Atlantean civilization.

Throughout the centuries interest in Atlantis has been very high, and locations worldwide have been proposed as the exact place where this kingdom sank. Some scholars suggest that Atlantis was located at the Greek island of Santorini; destroyed by a volcanic eruption around 1,600 B.C. But Greek philosopher Plato described Atlantis in size, as Libya and Asia Minor put together, suggesting it was located somewhere in the Atlantic, beyond the Pillars of Hercules.

According to Plato, Atlantis was protected by the god Poseidon who made his son Atlas king of this mythical land. The Atlanteans grew powerful but suffered ethically; their great armies were able to conquer Africa as far as Egypt and Europe going as far as Italy. According to one theory it was by divine punishment that the “continent-island” sank; in one day and one night. 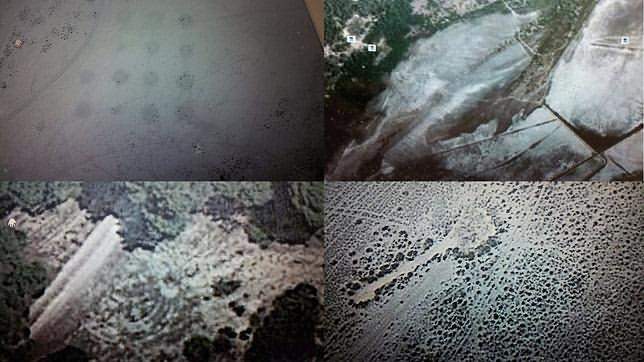 Manuel Cuevas, native of the town Cadiz of Sanlucar de Barrameda, has informed the Board of Andalusia what he considers the discovery of a great ancient city buried in the area of ​​La Algaida pine forest, near the mouth of Guadalquivir and near Doñana. ‘I believe 99 percent that I have finally found the lost city of Atlantis’ said Cuevas to La Voz Digital.

The discovery of the ‘lost city of Atlantis’ was made based on satellite photographs taken at an altitude of 700 kilometers , which were adjusted and zoomed to reveal the structures. According to Cuevas the images show “the existence of various structures made by man and that would be part of a great ancient city.”

Cuevas has given the Board of Andalucia the coordinates of what has been interpreted as four large buildings (one of which would measure 360 ​​by 180 meters) all of which is located in a large city with an area of ​​8 square kilometers. Cuevas sustains that given the history of the region, this lost city would be at least 2500 years old.

Cuevas, a 52-year old researcher and self employee believes that this ancient city was suddenly destroyed by great floods and sediments of the surrounding terrain. Interestingly this finding is located near the location where German archaeologist Adolf Schulten believed to have located the lost city of Tartessos, six kilometers from La Algaida, at the other side of the Guadalquivir River.

Cuevas has asked the Ministry of Culture to conduct a study of electrical tomography in order to determine how deep the walls from the ‘lost city’ are located in order to excavate the site as soon as possible.

Ramón Corzo, Professor of Archaeology at the University of Seville, believes that the information provided by Cuevas is certainly interesting and would have to be double checked.