Just when I thought I’d seen it all. Apparently, Master Yoda From Star Wars is real.

An image of Yoda appears in a medieval manuscript of the fourteenth century, and its the best thing I’ve seen in a while.

Looking at the depiction, it obvious that there are similarities between Yoda and the character found in a manuscript of the Decretals of Gregory IX also known among researchers as the Smithfield Decretals.

It is found in the British Library and was written in the south of France probably between 1300 and 1340 and includes papal letters, doctrine, and ecclesiastical decrees.

The drawing of Yoda is actually part of an interpretation of the biblical story of Samson. 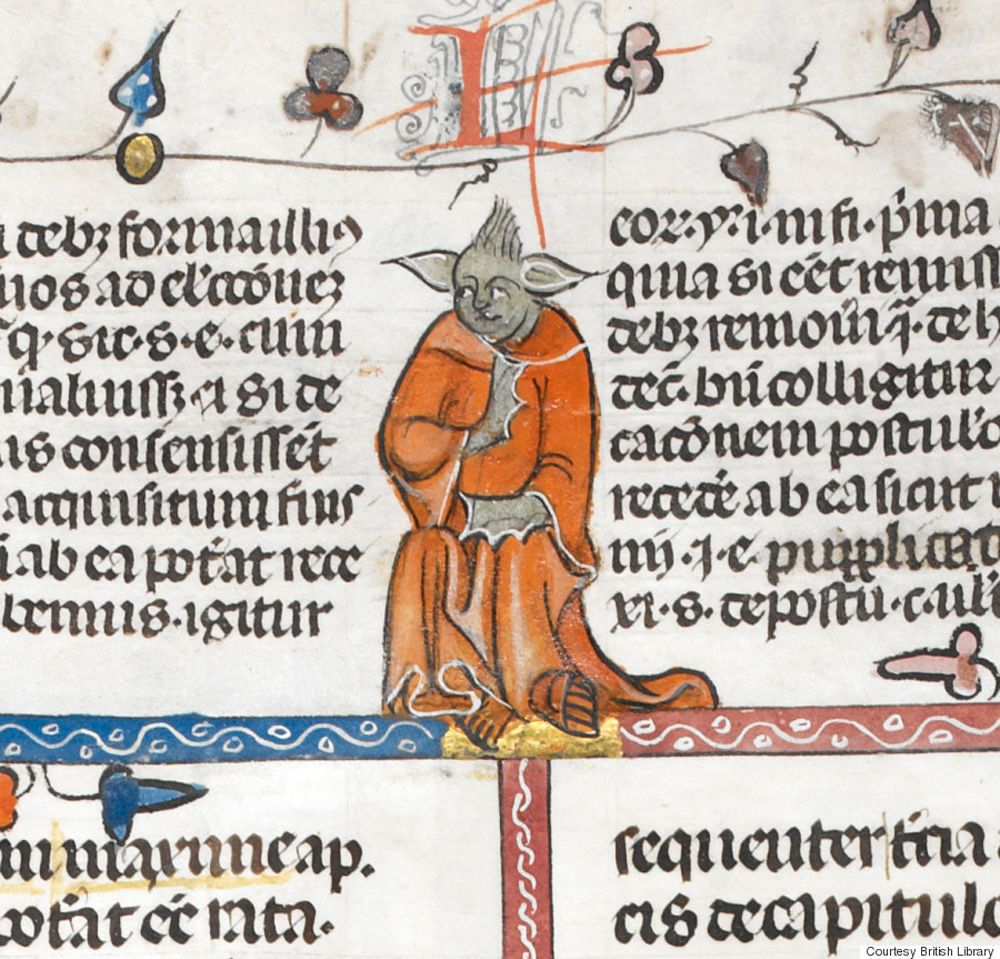 “When I came across this monster, I actually couldn’t believe it. It’s a manuscript that was produced 700 years ago,” Kempf told BBC Radio’s

Nobody knows who this character with greenish complexion, a big skirt, and big ears really is.

However, compared to an image of the Jedi master who was a mentor to the young Luke Skywalker in Star Wars, the two are identical.

The British Library started uploading images like of ancient texts like this one where we can see Yoda in 2010, so it’s not really possible that George Lucas was inspired by ancient manuscripts like these unless of course he actually went through the British Library’s archives when he was creating the first Star Wars movie.

So… how did Yoda come into existence? The make-up artist Stuart Freeborn based Yoda’s face partly on his own and partly on Albert Einstein’s. Freeborn oversaw the design of the original Jabba the Hutt puppet used in Return of the Jedi, as well as the creation of the Ewoks.

In The Phantom Menace, Yoda was redesigned to look younger.

He was computer-generated for two distant shots but remained mostly a puppet.

The puppet was re-designed by Nick Dudman from Stuart Freeborn’s original design.

Therefore, many people—especially Star Wars Fans—find it would be necessary to clarify who this greenish, Yoga-looking figure really represents, and what he’s doing in an ancient manuscript that dates back to the 14th Century.

Curiously, if you take a look at the ancient manuscript, and compare it to the ‘characters’ from Kempf’s new book, you’ll notice Yoda isn’t the only familiar character around.

You can spot a few more creatures that bear an incredible resemblance to figures of recent times.