There’s a mysterious alien planet located around six light-years away from Earth. It’s one of the closest potentially habitable exoplanets to Earth and scientists say it could harbor primitive alien lifeforms. 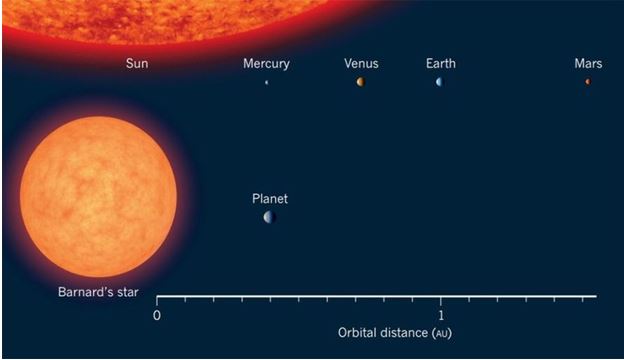 Two researchers from Villanova University in Pennsylvania; Edward Guinan and Scott Engle, have suggested that primitive life could have developed in the not-so-distant alien world called Barnard b, located Six light-years years from the Sun.

It is believed that the exoplanet – whose existence was announced last November – is probably extremely cold, with temperatures down to -170 degrees Celsius.

The announcement was based on findings from a paper titled, “X-Ray, UV, Optical Irradiances and Age of Barnard’s Star’s New Super-Earth Planet – ‘Can Life Find a Way’ on such a Cold Planet?”

However, it has the potential to harbor primitive life if it has a large core of hot iron or nickel and geothermal activity, astrophysicists have revealed.

In an article published by the Villanova University, the researchers say that “Geothermal heating could support “life zones” under its surface, akin to subsurface lakes found in Antarctica.

“We note that the surface temperature on Jupiter’s icy moon Europa is similar to Barnard b but, because of tidal heating, Europa probably has liquid oceans under its icy surface,” explained Guinan.

Barnard B (also known as GJ 699 b) is a star with a mass just over three times that of the Earth. Its classified as a Red Dwarf, and the exoplanet orbits the alien sun every 233 days, circling it roughly at the same distance that the planet Mercury orbits the sun in our solar system.

The ‘frozen’ exoplanet is believed to be around 3.2 times larger than our planet. The Star Barnard B is considered our closest cosmic neighbor after the three-star system Alpha Centauri, located 4.3 light-years away.

Astronomers have revealed in the past that a planet orbiting Alpha Centauri could also be a good candidate for harboring life on its surface.

In fact, Proxima B, an exoplanet orbiting in the habitable zone of the red dwarf star Proxima Centauri, is one of the planets which NASA would be very interested in visiting in the near future.

A possible mission to visit the alien world has already been proposed.

And while scientists cannot agree whether or not Proxima B may have life on its surface, Barnard B may be our best bet of finding alien life close to Earth.

“The universe has been producing planets the size of the Earth for much longer before our existence, or even before the Sun itself,” explained Engle.

“Barnard’s Star has been on our radar for a long time,” Guinan concluded.