The Atacama desert of Chile hides a massive hand protruding...

It’s as if a giant was buried beneath the Atacama Desert, reaching for the sky asking for help.

It’s called the hand of the desert or ‘la mano del Desierto’, and it’s a massive statue found in the Atacama Desert of Chile, at an altitude of 1,100 meters above sea level.

Located in the Atacama Desert in Chile, some 75 kilometers south of the city of Antofagasta, there is a massive hand protruding from the ground.

Its existence has created confusion among many who traveled the Panamerican Highway, seeing a massive hand reaching from the sky, half buried under the thick layers of the Atacama Desert.

So, what’s up with the hand? Is there like a giant statue buried beneath it?

No, not really, although it would be pretty cool, right?

Anyway, the hand of the desert is a steel sculpture built with reinforced concrete and has a height of 11 m. It was inaugurated on March 28, 1992, and its construction was financed thanks to contributions from the  Corporación Pro Antofagasta, a local booster organization.

Its maintenance is carried out by the same corporation, who perform cleaning operations since the sculpture is a constant target of graffiti.

According to its author, Chilean sculptor Mario Irarrázabal, each visitor to the Hand of the Desert can give their own interpretation of the meaning of this sculpture.

Some say it is the city saying goodbye to the traveler.

According to others, it represents the victims of injustice and torture during the military dictatorship of 1973-1990. May agree it was built to portray the vulnerability and helplessness, especially the miners of the city of Antofagasta, the remote center of Chile’s copper mining industry.

Check out a set of incredible images of the Hand of the desert here.

And if you want to visit the statue yourself, its located about 75km south of the town of Antofagasta marked 1309 on the Pan-American Highway. 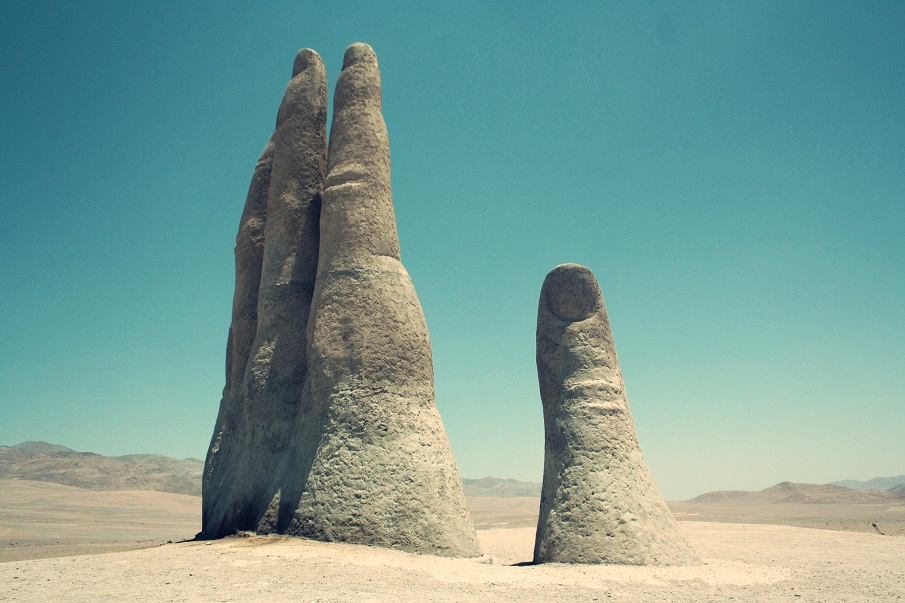