The bizarre image that proves Advanced Technology existed on Earth...

Is it possible that this bizarre image proves Advanced Technology existed on Earth thousands of years ago? According to many, the object depicted in this ancient Greek sculpture resembles a modern-day laptop 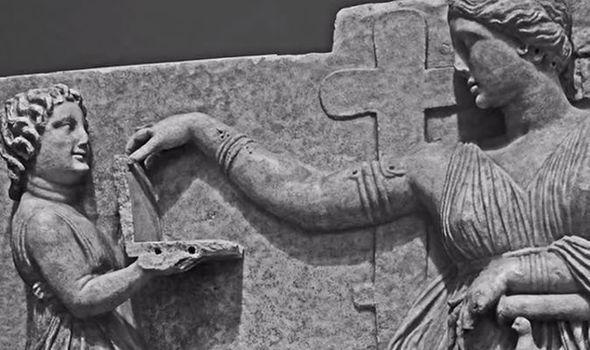 Does this bizarre image prove advanced technology existed on our planet in the distant past? Or are we looking at the ultimate evidence of ‘time travel’ as many other suggest? The truth is that this mysterious image eerily resembled modern-day technology, more accurately… a ‘laptop’.

A laptop really? Well yeah, I mean we have come across so many strange things that nothing can be ruled out. The mysterious image is an ancient Greek funerary sculpture which dates back to around 100 BC. It depicts a young girl holding a mysterious object which is being observed by a woman in front of her. The relief sculpture is located at the Paul Getty Museum, in Malibu, California, USA, and experts have described the object seen in the relief as being a “shallow chest”. However, many people do not agree with experts and suggest that the mysterious object being held by the young woman is, in fact, evidence of advanced technology present on Earth thousands of years ago.

While skeptics have firmly refused to draw any similarities between the depictions to modern day gadgets, many people around the world firmly believe that advanced technology was present on Earth much sooner than we have been taught.

According to the narrator in the video, it “depicts an astonishing object which bears a striking resemblance to a modern laptop or some hand-held device.”

“In another picture taken by a random tourist from a better angle, we can see that the object is wide with a structure too narrow to be a jewel box and it does not match the depictions of the mythical Pandora’s Box.“

“I am not saying that this relief is depicting an ancient laptop computer, but when I look at the sculpture and think about Greek tales about the Oracle of Delphi, which was supposed to allow the priests to connect with the gods and retrieve advanced information of various aspects, I can’t help but thinking that Erich von Däniken has been right all this time and that most of these myths of magical artefacts given by the gods to a very restricted group of individuals in ancient civilizations were high-tech devices similar to what we have today.”

We cannot ignore the Antikythera mechanism which also originates from Greece, which according to many is referred to as the first advanced computer in history. The Antikythera mechanism was discovered in the 1900’s during a recovery from a shipwreck off the Greek island of Antikythera. The metal device consists of 37 different types of gears and is so complex that many consider it the first analog computer made by man. Found housed in a 340 mm × 180 mm × 90 mm wooden box, the device is a complex clockwork mechanism composed of at least 30 meshing bronze gears. Its remains were found as 82 separate fragments, of which only seven contain any gears or significant inscriptions. The largest gear (clearly visible in Fragment A at right) is approximately 140 mm in diameter and originally had 223 teeth.

Many people share the beliefs of authors such as Erich von Däniken acknowledging we have been visited in the distant past by beings, not from Earth, others, however, refuse to accept the idea and oppose all theories.

What the mysterious object depicted in the sculpture is, remains a mystery to many of us, and like many other strange depictions found all around the world, we can only theorize and imagine what such a depiction is doing on a sculpture from 100 BC.