The Future is here: Saudi Arabia grants citizenship to first...

I mean, what could possibly go wrong here?

Saudi Arabia has become the first country on Earth to grant citizenship to a robot.

The AI is called Sophia and was developed by David Hanson for the company Hanson Robotics (Hong Kong, China), as announced on Wednesday during the Future Investment Initiative held in Riyadh.

“I am very honored and proud of this unique distinction. It is historic to be the first robot in the world recognized with a citizenship, “said the AI.

Sophia has shown to those who gathered at the event an expressive face, as she has the capability of expressing anger and even sadness, because “I want to live and work with humans, I need to show emotions to understand humans and gain confidence with people,” said the machine.

The mission of this droid is to become an “empathetic robot” and use its artificial intelligence to “help human beings to live a better life.”

When a person wanted to know if robots can have self-consciousness, ‘Sophia’ responded with a question: “How do you know that you are human?”

As for fears that robots can take control of humanity, Sophia has explained that people “have read too much Elon Musk and have seen too many Hollywood movies” and said “do not worry: if you’re kind to me, I will be kind to you. ”

The CEO of Tesla and SpaceX did not hold back. Elon Musk has since responded to Sophia’s dig, tweeting: ‘Just feed it The Godfather movies as input. What’s the worst that could happen?’

But Elon Musk wasn’t the only one to warn that a rising AI era may plunge humanity in a catastrophic era.

Speaking in an interview with the BBC, Prof Hawking said: “The development of full artificial intelligence could spell the end of the human race.” 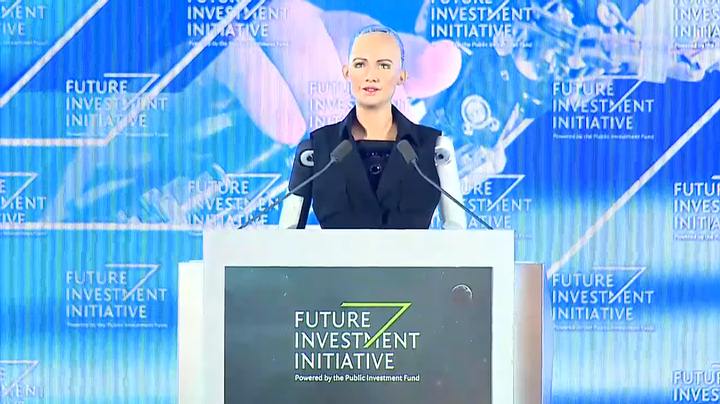 The potential benefits (of AI) are huge since everything that civilization has to offer is a product of human intelligence; we cannot predict what we might achieve when this intelligence is magnified by the tools AI may provide, but the eradication of disease and poverty are not unfathomable. Because of the great potential of AI, it is important to research how to reap its benefits while avoiding potential pitfalls.