Reports of giant skeletons printed in newspapers over a century...

It seems that the idea that Giants walked on Earth is a possibility being considered by more people in the last couple of years. Due to the number of mysterious findings around the world, a large number of researchers are considering the possibility that these ‘mythological’ beings actually existed on Earth in the distant past.

Stories and tales about gigantic beings inhabiting Earth occur in almost all ancient cultures and civilizations. We can find stories in many mythologies of the ancient world: Greek, Norse, Germanic, Indian, Indo-European, and also in the new world as in the traditions of the Mayans, Aztecs and Incas; but most importantly in almost all major sacred books of antiquity: the Lebhar Gabhale, the Hindu Ramayana and even in the Bible. 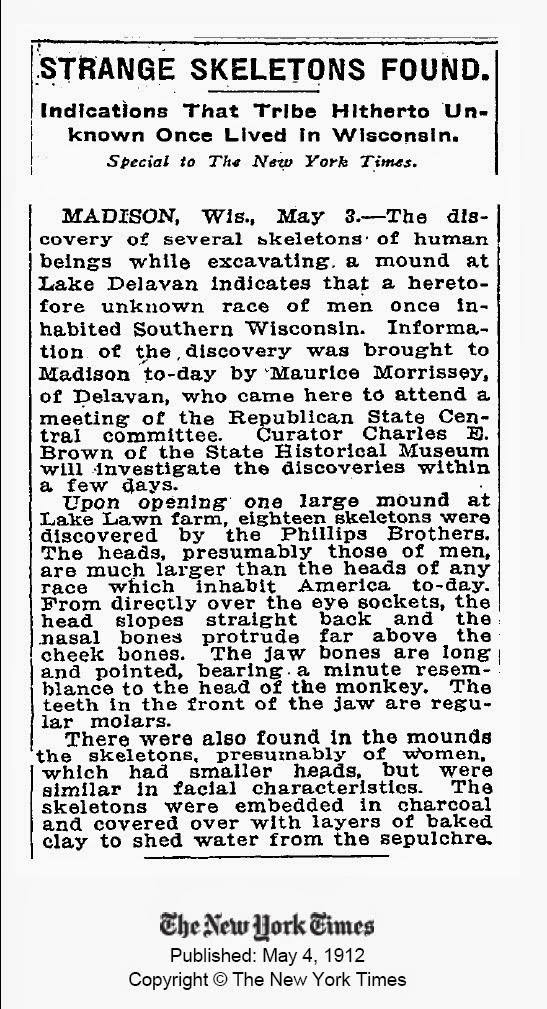 One of those ‘crucial’ pieces of evidence is a discovery made in Wisconsin, a discovery that was omitted by researchers who remained silent and decided not to speak about the lost race of giants found in burial mounds near Lake Delavan in Wisconsin. The mysterious discovery, which was first reported in the 4 May 1912  issue of the New York Times states that at least 18 anomalous skeletons had been found in Wisconsin exhibiting extremely weird features unlike any known species to date. The excavation site was overseen by the Beloit College and included over 200 mounds. (source)

These anomalous skeletons were unlike anything seen before, totally differing from any known human species with alleged heights that ranged between 8 to 10 feet.

“…presumably those of men, are much larger than the heads of any race which inhabit America to-day.”

“Modern day archaeology and anthropology have nearly sealed the door on our imaginations, broadly interpreting the North American past as devoid of anything unusual in the way of great cultures characterized by a people of unusual demeanor.”

“The great interloper of ancient burial grounds, the nineteenth century Smithsonian Institution, created a one-way portal, through which uncounted bones have been spirited.”

“This door and the contents of its vault are virtually sealed off to anyone, but government officials. Among these bones may lay answers not even sought by these officials concerning the deep past.”

“There were giants in the earth in those days; and also after that, when the sons of God came in unto the daughters of men, and they bare children to them, the same became mighty men which were of old men of renown.” Genisis 6:4

The Smithsonian Institute has been accused by many people of deliberately hiding discoveries that could potentially alter the views society has on history and life on Earth.

On 10 August 1891, the New York Times reported that scientists from the Smithsonian Institution had discovered several large “pyramidal monuments” on Lake Mills, near Madison, Wisconsin.

“Madison was in ancient days the center of a teeming population numbering not less than 200,000,” the Times said.

“The celebrated mounds of Ohio and Indiana can bear no comparison, either in size, design or the skill displayed in their construction with these gigantic and mysterious monuments of earth — erected we know not by whom, and for what purpose we can only conjecture,” said the Times.

The mysterious stories continue throughout the years, and in 1897, the Times wrote another story about large burial mounds discovered in Maple Creek, Wisconsin. (source)

“In it was found the skeleton of a man of gigantic size. The bones measured from head to foot over nine feet and were in a fair state of preservation. The skull was as large as a half bushel measure. Some finely tempered rods of copper and other relics were lying near the bones.”

In 1870 the Wisconsin Decatur Republican published an article about two well-preserved giant skeletons of an unknown race discovered near Potosi.

“The January 13th, 1870 edition of the Wisconsin Decatur Republican reported that two giant, well-preserved skeletons of an unknown race were discovered near Potosi, WI by workers digging the foundation of a saw mill near the bank of the Mississippi river.

One skeleton measured seven-and-a-half feet, the other eight feet. The skulls of each had prominent cheek bones and double rows of teeth. A large collection of arrowheads and “strange toys” were found buried with the remains.”

The list of the anomalous discoveries goes on and on… and giant skeletal remains have been found in Minnesota, Iowa, Illinois, Ohio, Kentucky and New York, and other places around the world. Strangely, these discoveries have never been given proper attention by the media, and most researchers consider them as being unimportant to history.

We cannot forget to mention the 200 million-year-old Giant Footprint found in Africa that hasn’t been explained by researchers who have tried very hard to ignore it since it could potentially rewrite history as we know it.