The Lost City Of Dwarka—A City Built By A God,...

An ancient city said to have been built by a God and mentioned in one of the most sacred and ancient texts on Earth, the Mahabharata.

Until recently, the very existence of the ancient city of Dvārakā was a matter of legends and myths. However, as we have learned from history, myths and legends are divided by a thin line from reality.

This legendary ancient city is said to have been founded by Sri Krishna and is considered an extremely important historical landmark in the Mahabharata.

The modern city of Dwarka which in Sanskrit means “Gateway to heaven” is located north-west of the Indian State of Gujarat.

Dwarka is considered one of the Dhamas —one of the four sacred pilgrimage sites of Hinduism.

Furthermore, the city is considered one of seven ancient religious sites in the country.

The modern city of Dwarka draws its reputation from the ancient, lost city of Dvārakā.

It is said that the ancient city of Dvārakā was the first major capital of Gujarat.

The ancient city is mentioned in a number of ancient texts including the Mahabharata, the Shrimad Bhagavad Gita, the Harivamsha as well as the Skanda Purana, and the Vishnu Purana. 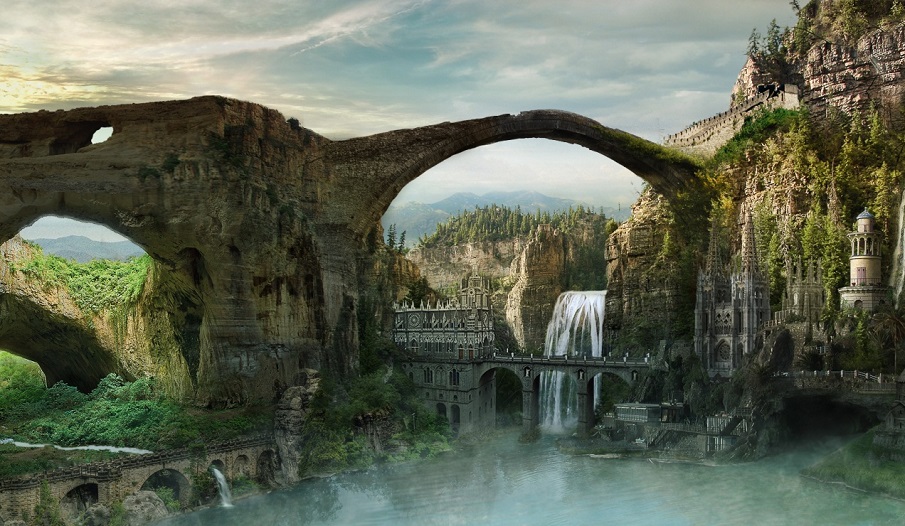 Ancient Sanskrit literature explains how Lord Krishna, the eighth Avatar of Vishnu created the legendary city. Before the legendary city was created, Krishna lived in the city of Mathura. The kingdom, suggests Hindu mythology, was constantly attacked–seventeen times in total– by Jarasanda, a tyrant king, ruler of Magadha.

In all seventeen battles, Krishna prevailed, but Jarasanda did not give up and decided to attack Mathura for the eighteenth time. Krishna decided not to risk his people and plans to build another city, on an island located on the western coast of India.

Different versions speak of how the city of Dvārakā was actually built.

In one version of the story, Krishan was brought by Garuda, the mount of Vishnu, just off the coast of India, where he eventually build the city of Dvārakā.

Another version of the story suggests that Brishan invoked the ‘celestial builder’ Vishwakarma, who is worshipped as the deity of construction.

However, as Krishan summoned Vishwakarma he was faced with another problem. Land. Vishwakarma informed Krishna that the task of building the legendary city could only be completed if Samudradeva, the Lord of the Sea, provided him with some land.

Since Krishna worshiped Samudradeva, the deity was pleased and offered Krishna 12 yojanas of land.

As the land was gifted to Krishan, Vishwakarma, the celestial ‘architect’ eventually completed the task of building the legendary city of Dvārakā. The city soon grew and became famous, housing thousands of people, in hundreds of palaces.

The legendary city of Dvārakā is also the place where a mighty ‘aerial battle’ took place.

If we take a look at what ancient Hindu texts tell us, a king named Salwa attacked Lord Krishna in the legendary city of Dwaraka.

“Lord Krsna struck Salva with sixteen arrows, and with showers of arrows He overpowered the airplane, just as the sun in a clear sky overpowers the whole sky by an unlimited number of molecules of sunshine…” (Source)

According to the ancient Sanskrit texts, in possession of his aerial vehicle, Salwa attacked the city of Dvārakā, raining down mighty weapons that resemble lightning. According to the narration in the epic, he possessed an aircraft known as Saubha Vimana and used it for air travel and for aerial warfare.

Large parts of the city were destroyed in the attack until the god Krishna, responded by firing weapons at this ‘spacecraft’.

The weapons in the ancient texts are described as arrows, but not ordinary arrows.

It’s said that once fired, the arrows roared like thunder and resembled bolts of lightning or rays of the sun.

Furthermore, the legend says that Krishna eventually departed Earth, and the ocean consumed his city of Dwaraka.

Until a few decades, the city of Dvārakā was thought to exist only in mythology.

However, now that experts have actually discovered evidence of such a city existing near modern-day Dwarka, history changes and with it the understanding and interpretation of ancient texts such as the Mahabharata.

Underwater archaeologists have recovered a number of ancient artifacts in the Gulf of Cambay, including construction material, pottery, sections of walls, beads, sculpture, and human bones and teet–all which have been found to be at least 9,500 years old.

“…The vast city — which is five miles long and two miles wide — is believed to predate the oldest known remains in the subcontinent by more than 5,000 years. The site was discovered by chance last year by oceanographers from India’s National Institute of Ocean Technology, who were conducting a survey of pollution. Debris recovered from the site — including construction material, pottery, sections of walls, beads, sculpture, and human bones and teeth — has been carbon dated and found to be nearly 9,500 years old…” (Source)

Experts believe that the area where the ancient city existed was submerged by melting ice caps and the end of the last ice age, some 10,000 years ago.