The mark of the Anunnaki? Meet the Giant footprints of...

The temple of Ain Dara—located to the northwest of Aleppo, Syria—is decorated by three GIANT footprints. Their exact purpose and meaning remain a mystery for scholars.

It is said that there is evidence that Giants once roamed the Earth all around the globe. What many consider only to be a myth is for many researchers and authors evidence that a different speices—one of much larger proportions—existed on Earth in the distant past. Maybe these massive beings were once misinterpreted as gods.

Ain Dara is a small village located to the northwest of Aleppo, Syria known for quite a few remarkable structures, among them the temple of Ain Dara, which lies just west of the village. The temple was discovered by chance in 195 when a colossal basalt lion was found. As a result of the finding, excavations were carried out in the following years revealing fascinating pieces of history.

With the numerous discoveries that have been made at Ain Dara, experts are still unsure as to what divinity this temple was dedicated to and the multitude of sculptures and bas-reliefs adorning the walls at the site make it extremely hard for scholars to decide.

However, even before you get a chance to take peek at the interior beauties of the temple there is much to be seen. Upon arrival, before entering the temple there are a pair of giant bare footprints—allegedly carved into the stone floor—which have taken both experts and tourists by surprise.

Interestingly, there is another third giant footprint not far away from the first two carved on the floor, almost suggesting where one should go to. So why carve such MASSIVE footprints, and why three?

What are these footprints? Were they representations of the Gods? Were they placed there for aesthetic reasons? Or are they evidence of something much more shocking?

It is still unknown what these giant footprints are supposed to represent. Some scholars have suggested that they are in fact animal prints, while others believe they represent the footprints of the gods.

Perhaps these massive markings—measuring about one meter in length—were meant to be an iconic representation of the Gods. The footprints may have been carved to illustrate the presence of the local deity entering the temple and approaching the throne in the inner sanctuary. 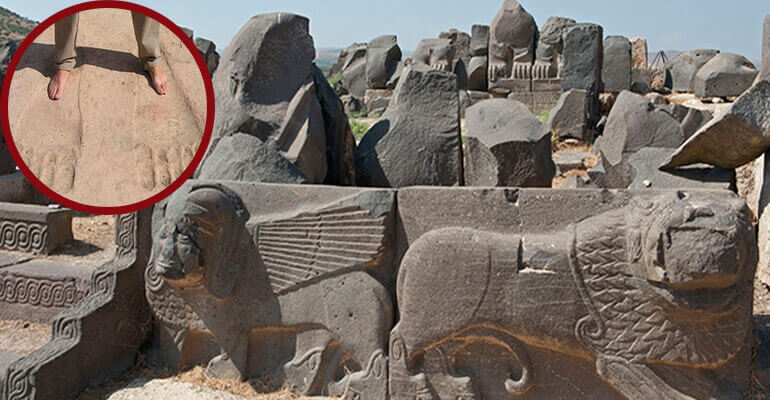 There are some archeologists who speculate that the massive footprints may have belonged to one of the Gods worshiped at the temple since there are numerous sculptures of Ishtar and the illustrations of the ancient Sumerian god of storm Ba’al Haddad adorn the walls, however, all of them are depicted wearing shoes with curled-up toes.

Other authors believe there is a completely different explanation and these footprints—as many others found around the globe—are a reminder of a distant time when Gods walked on Earth, making the entire planet tremble under their massive feet.

Furthermore, another interesting feature of the temple of Ain Dara is its similarity with the biblical description of the Temple of Solomon in Jerusalem.

It has been said that these two temples were similar in their floor plan, era, size, and decoration.

Before jumping to the conclusion that one temple influenced the other, it should be mentioned that there are also temples in that region that are comparable with the temple of Ain Dara and the Temple of Solomon.

These temples are Ebla, Emar, and Munbaqa. Hence, it may be suggested that these temples belonged to a wider cultural tradition, which dominated the region during that time.

Interestingly, Mesopotamia is well-known for being the cradle of Civilization and birthplace for one of the greatest Mythological stories on the planet, so finding curious and inexplicable discoveries like the massive footprints is something that you would expect to find in the area.

The Mythology of the surrounding area certainly suggests a time when Giants, Demigods, and Gods roamed the land leaving their mark behind.

The Ain Dara Temple and the giant footsteps of the Gods

Ain Dara Temple and the giant footsteps of God