The Otherworldly Qualities Of The Food Of The Gods

From the Nectar Of Greek Mythology, said to be a divine liquid with rejuvenating qualities to Amrita mentioned in Vedic Mythology, this article written by Simon E. Davies takes a look at the Food of the Gods, and their incredible, otherworldly qualities.

The nectar of the gods was a divine brew that could be used as a drink or an ointment. It was said to bestow youth and beauty upon anyone who used it. The goddess Aphrodite was said to have worn the nectar as perfume, while Apollo used nectar to preserve a corpse due to its incredible properties which could stop the decomposition of a body almost indefinitely.

Ambrosia was the most prized food of the Greek Gods. When a divine being ate the delicious ambrosia, their skin was cleansed of any defilement, making them appear younger and more desirable. Some scholars believe that both nectar and ambrosia were kinds of honey, prepared differently for consumption. It is said these foods have a healing and cleansing power, often used as an antiseptic. It was also believed that ambrosia could bestow immortality if eaten regularly.

Amrita is a divine food from ancient India, often mentioned in the mythical stories of the Rigveda. It was described as a drink which confers immortality upon the gods. Amrita features in the “ocean-churning” legend of Hindu mythology which describes how the devas, because of a curse from a crazed sage, lose their immortality. Assisted by their mortal enemies, the asuras, they churned a great ocean to create the wondrous amrita, the nectar of immortality. Those who drank it literally could not die.

In Chinese mythology, the peaches of immortality were consumed by the gods due to their virtue of conferring longevity on all who eat them. The sacred peach tree put forth its leaves once every thousand years and it required another three thousand years for the fruit to ripen. It was said the gods would wait for four thousand years before gathering the divine peaches and feasting on them for a day and a night.

In Norse mythology, Idunn was a goddess who was known as the keeper of golden apples. Her name means “ever young”, or “the rejuvenating one”. The Norse gods depended upon Idunn’s constant supply of these golden apples for their immortality. In the Prose Edda, there is a tale of how Loki was once forced by a giant to lure Idunn out of Asgard and into a wood, where she was then snatched away to his home. In Idunn’s absence, the gods grew old and gray. Once they rrealizedthat Loki was responsible for her disappearance, they made him find the goddess and steal her back from the giant. Only then did they regain their immortality and youth. 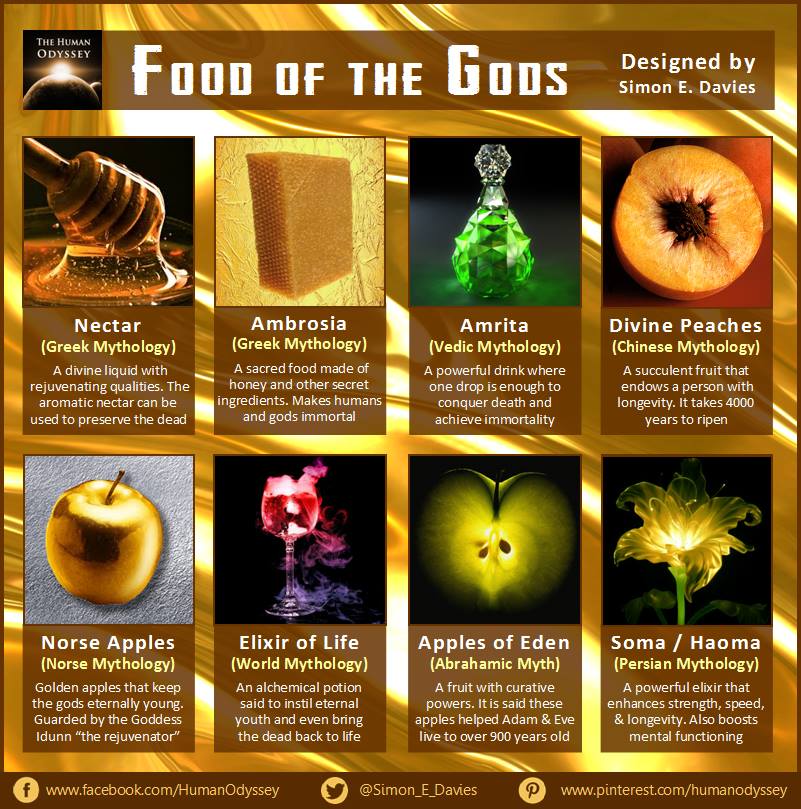 The elixir of life is a mythical potion that, when drunk from a certain cup at a certain time, grants the drinker with immortality and eternal youth. It was based on the alchemical teachings of Thoth and Hermes Trismegistus, both of whom in various tales are said to have drunk “the white drops” of liquid gold, and thus achieved immortality. Alchemists throughout the ages have tried to recreate this incredible formula but to no avail. In the Qin Dynasty, Qin Shi Huang sent a Taoist alchemist to the eastern seas to find the elixir, but he never came back.

In the Book of Genesis, the tree of life is (found in the Garden of Eden) is said to be guarded by Cherubim to prevent mortals from stealing its precious nectar. The tree is described in the Book of Revelation as bearing “twelve crops of fruit”, said to possess curing properties. Saint Bonaventure taught that the medicinal fruit of the Tree of Life contains the healing power of Christ himself. Thomas Aquinas (a Catholic priest from the medieval era) argued that the fruit of the tree served to maintain Adam’s longevity beyond that of an earthly animal life.

Soma was a sacred drink mentioned in Vedic and Persian texts that were said to bestow immortality on anyone who consumed it. The nectar is said to come from a plant which is described as possessing a long green stem with bright, shining yellow petals. It is said that when drinking this potent brew, a person’s body “roars” with the qualities of a god. The effects include greater speed and strength to warriors, strong, robust children to those giving birth, and spiritual power to those who apply themselves to the study of the philosophy.

The question is, are these divine foods merely a part of creative storytelling, or did they actually exist? Did our ancient ancestors actually discover a powerful substance capable of promoting speed, intelligence, and longevity?

Today there are many performance-enhancing drugs that can sustain life, bolster strength and empower the mind, all cultivated from the incredible properties of certain plants and foods. Perhaps the discovery of an ‘immortalising’ drug is almost upon us. But can we really break the cycle of life and death and expect no consequences.

Dare we walk in the footsteps of the gods?