The secrets of the Sphinx – Built by a civilization...

The Great Sphinx of Giza has, since ancient times, attracted great interest among researchers and tourists alike. This majestic monument eternally gazing at the East, where the sun rises, has caused great curiosity since there is very little knowledge about it. Is the sphinx the product of the ancient Egyptian civilization? Or is it possible that this incredible monument was constructed by an ancient civilization much older than the Egyptian?

Around 1816 and 1818 Captain Giovanni Battista Caviglia performed excavations at the Sphinx and surrounding temples. Due to the proximity to the Pyramid of Khafre, the great sphinx was quickly linked to the figure of the pharaoh of the fourth dynasty, claiming that the face of the Sphinx actually is that of Khufu.

From that day until today, the idea that the Sphinx belongs to the time of Pharaoh Khufu has remained unchanged and mainstream archaeology has not been willing to suggest any other theories explaining the great Sphinx and its origin.

This majestic monument was carved from a single block of stone, yet there are no written documents that could tell us much about its origin or purpose. The only “written” evidence that exists from ancient times about the sphinx is that of Greek historian and geographer Herodotus, who does not mention that the pharaohs of the fourth dynasty (Khufu, Khafre and Menkaure) were the builders of the Sphinx, nor the Pyramids of Giza. Therefore, we can easily say that there is no written evidence that “its” creators were ancient Egyptians, there are indications however, that the great Sphinx could have been created much before the ancient Egyptians.

The ‘Inventory stella’ – Found at Ghiza by Auguste Mariette in the 1850’s, in the ruins of the Temple of Isis clearly states that Khufu restored the Sphinx. This points to the fact that the Sphinx was constructed much before Khufu and not by him as some suggest. These Stelle reads:

“Long live The King of Upper and Lower Egypt, Khufu, given life
He found the house of Isis, Mistress of the Pyramid, by the side of the hollow of Hwran (The Sphinx)
and he built his pyramid beside the temple of this goddess and he built a pyramid for the King’s daughter Henutsen beside this temple.
The place of Hwran Horemakhet is on the South side of the House of Isis, Mistress of the pyramid
He restored the statue, all covered in painting, of the guardian of the atmosphere, who guides the winds with his gaze.
He replaced the back part of the Nemes head-dress, which was missing with gilded stone
The figure of this god, cut in stone, is solid and will last to eternity, keeping its face looking always to the East”

French Egyptologist and Director General of Excavations and Antiquities for the Egyptian government, Gaston Maspero, who surveyed the Sphinx in the 1920s asserted that:

“The Sphinx stela shows, in line thirteen, the cartouche of Khephren. I believe that to indicate an excavation carried out by that prince, following which, the almost certain proof that the Sphinx was already buried in sand by the time of Khafre and his predecessors.”

The dream of Thutmose

According to legend, before he was proclaimed king, Thutmose IV fell asleep between the paws of the Sphinx and dreamt Hor-em-akhet-Atum-Khepri was actually his father and that he was destined to be pharaoh. The god promised Tuthmosis the throne if he removed the sand which covering the Sphinx. Tuthmosis agreed and kept his word. He became pharaoh and not only cleared the sand but promoted Ra-Hor-em akhet above Amon-Ra – heralding perhaps the rejection of Amun by Akhenaten in favor of the Aten, which was represented as a sun disk.

Interestingly, according to senior forensic expert Frank Domingo of the New York Police Department, using his own detailed measurements taken of the Sphinx, determined through forensic drawings and computer analysis that the face of the Sphinx and the face seen on signed statues of Khafre could not be one and the same person

Dating the Sphinx accurately, is it possible?

In the early nineties, John Anthony West began questioning the dating of the mysterious Sphinx. He analyzed the erosion marks on the surface of the majestic monument coming to conclusions that have been very difficult to assimilate. In collaboration with geophysicist Thomas Dobecki and geologist Robert Schoch of the Boston University, a thorough analysis of the limestone of the Sphinx was conducted, concluding that the erosion was the result of extensive rain. But when did it rain that much in Egypt? The answer would prove to be a key detail in the accurate dating of the Sphinx. According to experts, extensive rainfall could have occurred in ancient Egypt around 13000 years ago. 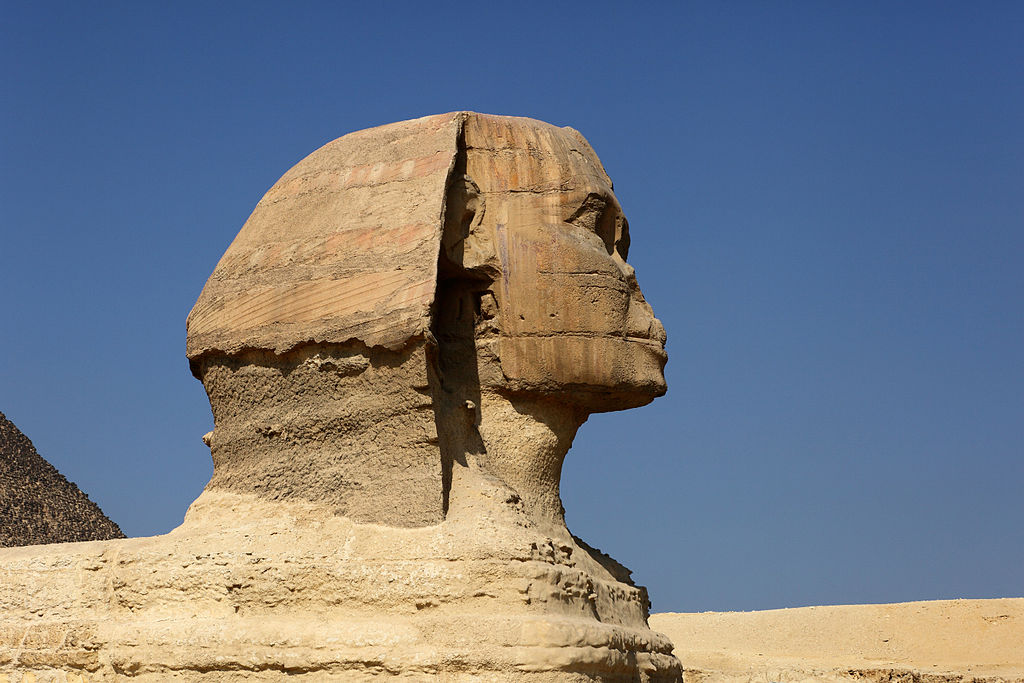 Even though there are numerous theories surrounding the great Sphinx, most of them have not been accepted by mainstream archaeology. Some theories even suggest that both the great pyramids and the Sphinx were once submerged under water. According to archaeologist Sherif El Morsi: “During one of the documentation of the ancient coastline, I almost tripped with a block of the second level of a temple,” said Mr. Morsi in an article published on the website Gigal Research. “To my surprise, the bump on the top surface of the block that almost tripped me was in fact an exoskeleton of a fossil of what appears to be a echinoid (sea urchin) which are marine creatures that live in relatively shallow waters.”

Sherif El Morsi suggests that the Giza plateau was once flooded by a surge. The temple site of Menkare in particular may have been a former lagoon when the sea level covered the Necropolis, the Sphinx, the complex of temples and other monuments of the area. According to El Morsi, the flooding, was quite significant, peaking at about 75 meters above current sea level and creating a coastline spanning to the Khafra enclosure near the Sphinx at the temple of Menkare.

Is it possible that the Sphinx was created by a civilization that predates the ancient Egyptian? Could it be that the Giza plateau was in fact flooded in the distant past? There are numerous mysteries surrounding both the Sphinx and the surrounding monuments, yet one thing has remained unchanged for centuries, the beauty that these majestic structures irradiate.

Hancock, Graham; Bauval, Robert. The Message of the Sphinx: A Quest for the Hidden Legacy of Mankind.