Located in the Museum of the Seminary of Sherbrooke are a set of mysterious stones that, according to many who have researched them, could offer conclusive evidence that neither the Vikings, nor Columbus traveled to America first, but a culture from Northern Africa, and 2,500 years ago.

The stones inscriptions allegedly tell the story of northern African explorers who traveled to the American continent some 2,500 years ago.

The stones, which are located at the museum since 1910 are believed to have been discovered in the early 19th century. One of the stones was found 100 miles east of Montreal, in a field near Bromptonville, five miles north of Sherbrooke, while the other one was discovered on a hill overlooking Sherbrooke.

So, did African explorers reach the American continent thousands of years ago?

According to the inscriptions of the two stones made of limestone, the answer is a profound yes.

The two stones are approximately 22 by 32 inches.

The man who supposedly delivered the inscriptions on the stones was Professor Thomas Lee, an archaeologist from the University of Laval.

According to a newspaper slip, Professor Lee argues the inscriptions on the stones were written in an ancient Libyan script. 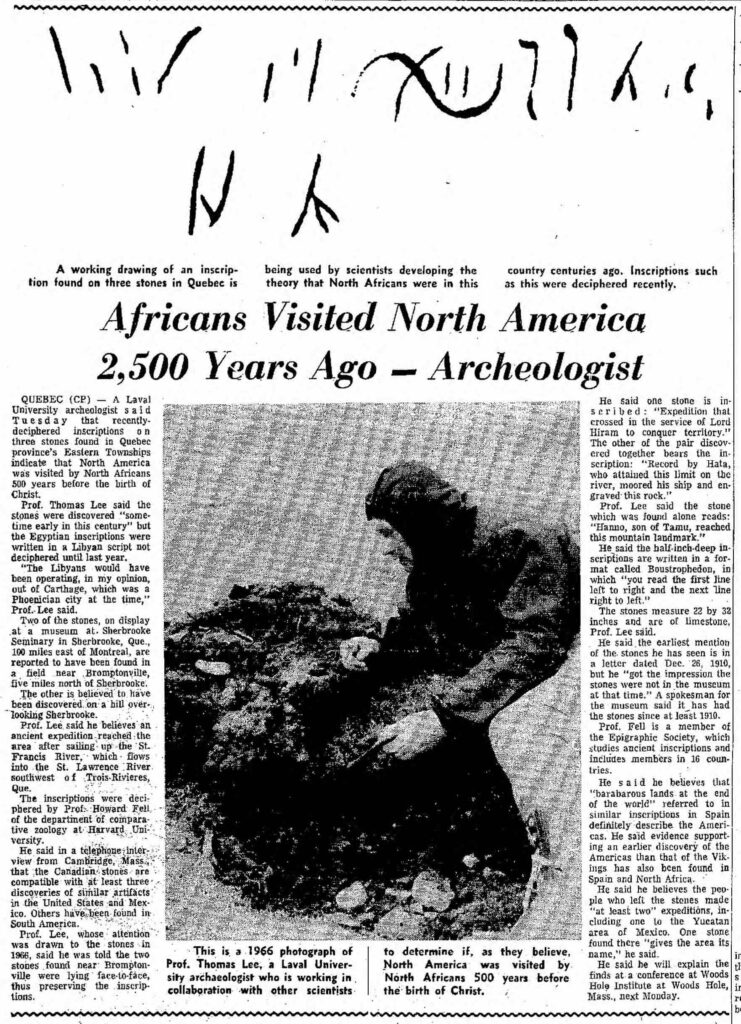 “The Libyans would have been operating, in my opinion, out of Carthage, which was a Phoenician city at the time,” Professor Lee is quoted in the newspaper.

According to Professor Lee, the ancient African expedition most likely reached the area after successfully sailing up the Sint. Francis River.

The inscriptions written in stone were deciphered by Howard Barraclough Fell, a professor of invertebrate zoology at the Harvard Museum of Comparative Zoology.

Despite the fact that Fell’s primary professional research included starfish and sea urchins, he is best known for his controversial work in New World epigraphy, arguing that various inscriptions in the Americas are best explained by extensive pre-Columbian contact with Old World civilizations.

Professor Fell’s work was—unsurprisingly—rejected by most mainstream scholars who firmly reject the notion that African explorers arrived in the American continent around 2,500 years ago.

According to Fell’s translation of the stones, they read: “Expedition that crossed in the service of Lord Hiram to conquer territory.” While the other of the pair discovered together bears the inscription: “Record by Hata, who attained this limit on the river, moored his ship and engraved this rock.”

Researchers argue that the text carved on the stone is called Boustrophedon, in which “you read the first line left to right and the next line right to left.”

Professor Fell is quoted saying that “barabarous lands at the end of the world” is probably a description of the Americas. Fell argues that the people who left the stones behind most likely made two more expeditions, one towards the Yucatan Peninsula. Professor Fell is quoted in the newspaper saying: One stone found there “gives the area its name”.

Interestingly, there are many ‘controversial’ pieces of evidence that suggest ancient cultures from America and Africa were interconnected, thousands of years ago.

For example, it is well known that a researcher called Dr. Svetla Balabanova discovered traces of Coca and Tobacco in ancient Egyptian mummies. Curiously, there is no evidence of coca or tobacco cultivation in Africa, Europe or Asia before the time of Christopher Columbus.

Another curious discovery was made some 200 years ago when miners discovered a strange mummy in one of the largest cave systems in America: The Mammoth Cave. Inside it, miners found an extremely well-preserved mummy with red hair prepared and embalmed in an eerily similar way as the ancient Egyptians. After examining the mummy in the late 1800’s, the Smithsonian Institute ‘lost’ the mummy.