There’s officially a new moon in our solar system

The new moon, which has been named after a sea creature from classical mythology, has a diameter of about 34 kilometers, and it orbits Neptune.

Although the moon wasn’t recently discovered (it was actually spotted in 2013), only now have researchers revised data and officially named and classified it as a new moon.

In the summer of 2013, astronomer Mark Showalter was studying images snapped by the Hubble Space Telescope in the space near Neptune. 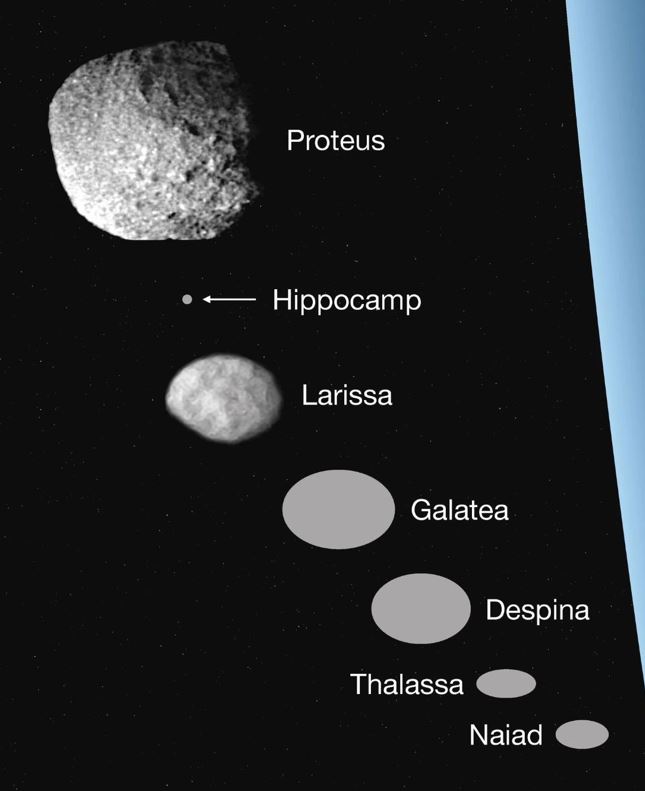 Showalter analyzed the small arcs of the tenuous ring system that surround the gas giant and was one of the first astronomers to look beyond these segments.

In doing so, he discovered a small white spot more than 100,000 km from the planet and quickly realized that this miniature speck, located between the orbits of the interior moons Larisa and Proteus, appeared in more than 150 photographs taken by Hubble between 2004 and 2009.

That summer, a first announcement was made about the discovery of the new moon, but he needed to wait until images obtained in 2016 confirmed its existence.

Now, the ‘new’ moon has a name: Hippocamp– a horse-headed, fish-tailed creature in Greek mythology.
“So, officially, it’s named after this mythological creature,” Showalter told Space.com. “But partly, in my mind, it’s named after seahorses, because I think they’re cool.”

The new study focused on Hippocamp which was published (Feb. 20) in the journal Nature.

In the new study by Showalter and his team, a clever technique they devised a few years back is described that helped them discover the new moon.

Researchers basically “transformed” eight sequential 5-minute Hubble exposures of the Neptune system, and rearranged pixels so they could “stack” Hubble Photographs of Hippocamp on top of each other despite the moon’s orbital motion, explains Space.com. 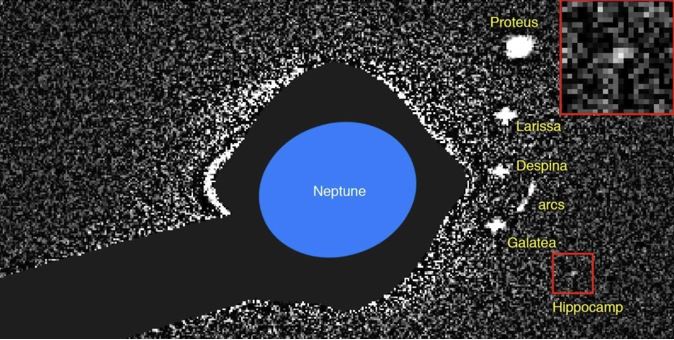 What researchers did was turn eight individual exposures into a single 40-minute exposure.

We know very little about the moon, but the little we know can help us understand Neptune’s system much better.
Hippocamp orbits are quite close to one of Neptune’s larger moons, Proteus. This fact, together with its small size has given astronomer indications that Hippocamp may actually be the fragment of another moon, in this case, Proteus.
In fact, astronomers believe that billions of years ago, Proteus was impacted by an asteroid which left behind a massive crater on its surface.

Scientists speculate that Hippocamp may be the result of that impact.

This theory still remains to be proven. But whether or not Hippocamp and Proteus share a common origin, the newly-named moon is so small and dim that most images of the Neptune system don’t reveal it at all.

We still don’t know Hippocamp’s composition, but astronomers believe it most likely shares the same materials as those found on Proteus.