This fascinating new ‘Periodic Table’ explains the cosmic origin of... 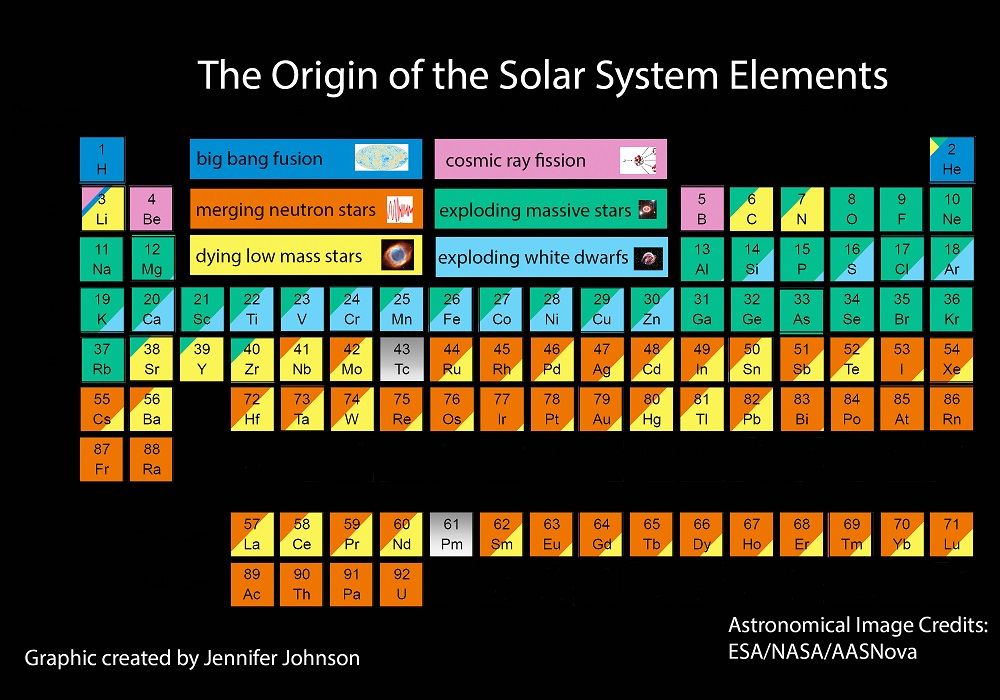 A US Astronomer has created a sensational new periodic table that explains the origin of nearly everything. The periodic table illustrates how elements were created from different processes in the universe like the merging neutron stars—how Francium was made, exploding mass stars—how neon was crafted, and dying low mass stars—which helped make other elements like strontium.

Jennifer A Johnson has taken the periodic table to a whole other level by implementing a creative twist to the periodic table: The astronomer highlighted the origin of each element, completely changing the perspective of everything that is around us.

As Ms. Johnson explains it, hydrogen is in fact the most COMMON element in our universe and is believed to have been created by th4e Big Bang around 13.4 BILLION years ago.

According to Ms. Johnson, the other elements were created from different processes in the universe like the merging neutron stars—how Francium was made, exploding mass stars—how neon was crafted, and dying low mass stars—which helped make other elements like strontium.

This revolutionary yet fascinating project was born from frustration says, Dr. Johnson.

Writing in a blog post for the Sloan digital Sky Survey Dr. Johnson said: “This is what happens when you give two astronomers, who are tired of reminding everyone about which elements go with which process [on] a periodic table, a set of markers, and time when they should have been listening to talks.”

Interestingly, at the bottom of the section, several elements have been left off the list.

Dr. Johnson says that: “Tc, Pm, and the elements beyond U do not have long-lived or stable isotopes.”

“I have ignored the elements beyond U in this plot, but not including Tc and Pm looked weird, so I have included them in gray.”

Curiously, a similar project was even uploaded to Wikipedia, however, Dr. Johnson notes that some of the information on that table is incorrect.

“Which ‘supernova’ is being referred to in the Wikipedia graphic is not clear. The information for Li is incorrect. [The isotope] Li is indeed made by cosmic rays hitting other nuclei and breaking them apart.”

“But most of the far more common Li isotope is without question made in low-mass stars and spewed out into the Universe as the star dies. Some Li is also made in the Big Bang, and a small fraction by cosmic ray fission,” added Dr. Johnson.

Head over to Johnson’s blog to access a high-resolution version of this AWESOME periodic table: