Is There A UFO In A 15th Century Painting From...

Here is an odd one; Real life “Dracula” and a UFO?

Yeah, it sounds a bit crazy but check out the interesting images below and then form your opinion.

A painting on the wall of a 700-year-old monastery appears to depict a disk shaped object with a smoke trail hovering above the church. It is anything but ordinary and has nothing to do with religion… 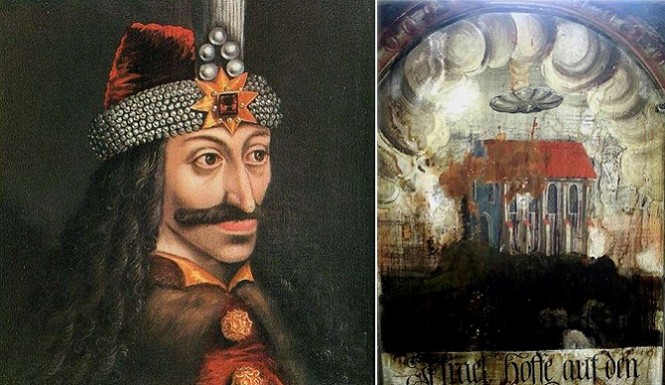 This ancient church is located in the historic region of Transylvania, and the town of Sighisoara is the birthplace of Vlad III, Prince of Wallachia or perhaps better known as “Vlad III Dracula”.

According to historical records, “Dracula” was born in Sighisoara in December of 1431. Vlad III “Dracula” is a popular hero in Romanian folklore for his protection of the Romanian population both north and south of the Danube.

He was viewed as an extremely cruel ruler, a tyrant thirsty for blood. Historians believe that the number of his victims ranges from 40,000 to 100,000. Popular pamphlets in Germany give numerous examples of the cruelty of “Vlad III Dracula”;

He roasted children, whom he fed to their mothers. And (he) cut off the breasts of women, and forced their husbands to eat them. After that, he had them all impaled. –Gutknecht. (1521), p.7 German

He was dubbed as “The Impaler” because of his practice of impaling his enemies. The name of the vampire Count Dracula in Bram Stoker’s 1897 novel Dracula was inspired by Vlad’s patronymic.

But what does Dracula has to do with the painting of a UFO in the church of the town he was born in?

This is a mystery that has yet to be solved. Paintings like the one present in the Church of the Dominican Monastery in Sighisoara depicts a flying disc that appears very similar to other disk-shaped objects that have been present in the historical artwork.

We cannot forget the 17th-century French jetons that seem to depict flying saucers as well, even though historians have “debunked” the French jetons stating that these are just depictions of “shields”. 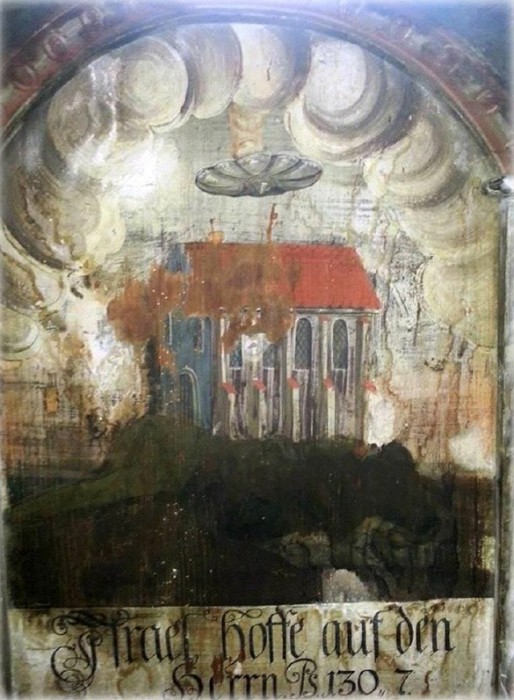 The painting in the Church of Sighisoara cannot be mistaken as a shield as the object is clearly of great size, it is depicted as hovering above the church and it has a smoke trail clearly visible. It is sure that a shield of these dimensions would have been impossible to construct and even if it was a possibility, why is it hovering above the church in smoke? It is a mystery that has baffled not only ufo researchers but historians as well.

The inscription present under the painting is a Biblical quotation in German according to historians, which leads us to believe that the actual painting was made around 1523, which is the year that the bible was translated into the German language.

Historians disagree with the idea that paintings like the one in the church in Sighisoara depict actual extraterrestrial crafts, they believe that these are merely representations of artists’ abstract ideas. Among the most interesting depictions of “UFO’s” we include The Madonna with Saint Giovannio, where a disk-shaped object similar to the one painted in the church of Sighisoara shoots a ray over the left shoulder of Mary.

Are these paintings just abstract ideas painted by ancient artists or is there something otherworldly with these paintings? Where artists actually painted what they saw hundreds of years ago, disk shaped saucers flying across the sky.