Ufologists spot mysterious numerical signs on both the Moon and...

According to Ufologists and UFO hunters around the globe, intelligently designed numerical number are literally ‘inscribed’ into the surface of the moon and the red planet. Sandra Elena Andrade reports to have discovered the number 58 inscribed on the surface of Earth’s moon and on the surface of Mars using popular tool Google Maps which allows us to explore Earth, its moon, and Mars. 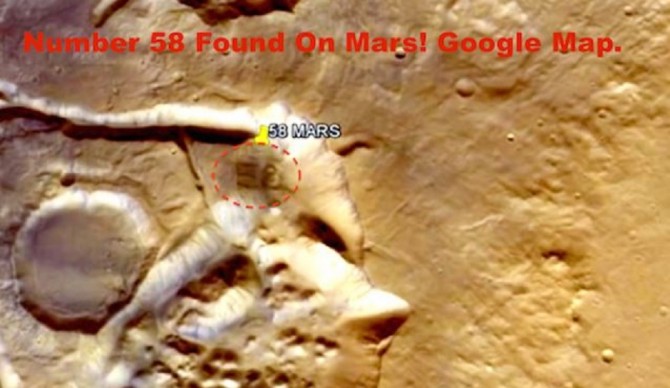 In a video uploaded onto YouTube on December 28, 2015, Andrade catalogued the discovery as amazing arguing that the mysterious numerical designs inscribed on the surface of our moon and Mars are evidence of the presence of an intelligent Alien species.

This coincidence is undeniable even for those who reject this type of discovery, saying it is pareidolia. The pictures are by Google Mars and Google Moon. Everyone can see and draw their own conclusions. — Sandra Elena Andrade

Skeptics on the other hand are anything but convinced suggesting that these alleged numerical signs are nothing more but the result of Pareidolia, when the brain tricks us into seeing familiar patterns or shapes. Andrade and other ufologists firmly disagree. She added: “This coincidence is undeniable even for those who reject this type of discovery, saying it is pareidolia.

“The pictures are by Google Mars and Google Moon. Everyone can see and draw their own conclusions.”

UFO sightings daily author Scott Waring who has made headlines in recent months due the numerous discovered featured on his website confirms the exact Mars coordinates of the “number 58” inscription as 1°29’8.27″N 23° 0’11.92″W, but states there is an apparent error in Andrade’s specification of the coordinates for the alleged inscription on the surface of the moon.

Despite many different views on these new discoveries, Waring recalls a similar discovery he made in June 2015, when he found the number ‘6’ or ‘9’ inscribed on the Martian surface in a Mariner 7 photograph.

“This #58 is there, and is easy to make out. I have only confirmed the Mars coordinates, so maybe if you get the Moon coordinates please tell us in comments,” Waring writes.

One YouTube user has a very interesting theory suggesting there is nothing out of the ordinary here and explains it:

“Google Earth stitches images together to form the illusion of the Moon being a sphere,” Arnold wrote. “It is possible that there was an image that was labeled ’58’ and this was not edited out of the end product.

Scott Waring rejected this notion replying: “No stitching here. I’ve been doing this for decades and I find no flaws in the photo here.”

Whether the mysterious numerical sigs are Pareidolia or actual intelligent signs is a subject that will certainly fuel debate among skeptics and believers, while many believe there are the result of some sort of Alien code left behind on Mars and the moon, it might just be that we are just looking at a freakish coincidence that tricked us into seeing something familiar.

What do you think these signs are? Are they just optical illusions that tricked our brain into seeing familiar patterns? Or are could they be the result of intelligent, extraterrestrial design?