Experts have discovered evidence of the OLDEST human activity in the Americas which dates back to a staggering 130,000 years ago. The date completely tears up everything we knew about human migration across the world, forcing us to rewrite history books.

A revolutionary new discovery has recently been published in the Journal Nature, sending a shockwave across the world, forcing us to rewrite—yet again—everything we thought we knew about the origins of life and human activity on Earth.

The arrival of the first humans to America has for provoked for years an intricate scientific debate among experts. For a long time, the Clovis were considered the continent’s oldest indigenous culture, established in America some 13,000 years ago.

However, this hypothesis has been questioned by different scientific investigations, which provide evidence of the presence of other primitive human groups 2,000 years before that.

But the new discovery detailed in the journal Nature by a team of American researchers is much more shocking and comes absolutely unexpected.

After finding evidence of the use of stone tools and fossil remains of a mastodon at an archaeological site in California, experts claim that some of our human relatives had already migrated to the New World approximately 130,000 years ago. 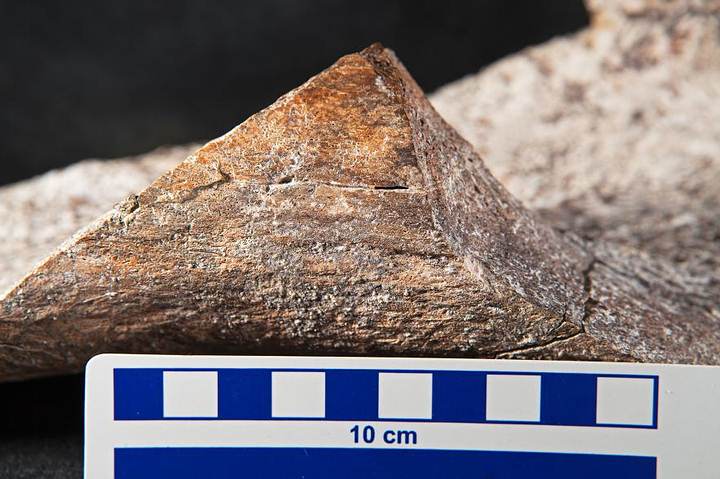 According to the general consensus among experts, it was believed that humans arrived in the Americas around 24,000 years ago. However, a new discovery is rewriting history books.

“I realize that 130,000 years is a really old date and makes our site the oldest archaeological site in the Americas,” says study leader Tom Deméré, the paleontologist at the San Diego Natural History Museum, whose team describes their analysis today in Nature. “Of course, extraordinary claims like this require extraordinary evidence, and we feel like the Cerutti mastodon site presents this evidence.”

Just to be clear, experts did not excavate human remains at the site. As Deméré and his colleagues explain, they have uncovered evidence—a mastodon skeleton, bone flakes, and several large stones—which clearly shows that the area was something like a ‘bone quarry’. There, a still unknown hominin smashed fresh mastodon bones with stone hammers, in order to extract marrow or mine the skeleton for raw materials, suggests an article by National Geographic.

As experts excavated the bones, they discovered that the curious indentations on the bones appeared to perfectly match various hammerstones, anvils and other tools found nearby.

To be precise, 131,000 years. Experts used a state-of-the-art uranium dating technique which undoubtedly proves that the bones—with curious indentations—date back at least 131,000 years.

Expects further note that no known carnivore, nor geological process in nature could have possibly made such marks on them.

However, the new study has provoked criticism among many scholars. Many of the leading experts in archaeology remain skeptical to the paper’s claims, and there some who have rejected it completely.

“The earliest occupation of the Americas is a highly contentious subject,” says University of Southampton archaeologist John McNabb. “The date of the find at 130,000 years ago is a really big ask for archaeologists who are used to talking about 12, 13, 14,000 years ago. It’s a big, big time difference.”

The time difference suggested by the new study is so huge that it completely TEARS UP everything we thought we knew about human migrations on Earth.

As noted by IFLScience, co-author Steven Holen, Co-Director of the Center for American Paleolithic Research said: “I expect there will be some extraordinary claims about how they got there. We expect criticism, and we are ready for it. I was skeptical when I first looked at it myself, but it’s definitely an archaeological site.”

Who these mystery people were, remains a profound mystery. According to experts, they predate the Native Americans and even the Clovis people. Experts note that the mystery settlers were most likely modern humans, Homo sapiens sapiens, Homo neanderthalensis, or, perhaps, something else.