Another ‘Alleged’ ‘Floating city’ Was Filmed Over China

Another bizarre ‘floating city’ has apparently been filmed in the sky above baffled onlookers in China, in a video that has gone viral since. Optical illusion? Hoax? Or something entirely different we can’t explain?

Yet another video has appeared on social networks showing what appears to be a floating city hovering in an overcast sky, as baffled onlookers were left shocked by massive structures that appeared above the sky.

The video—which has gone viral—has been interpreted by many users as another example of floating cities. The video was filmed above Jieyang, in the Guangdong province in China.

Sadly, no other footage of the event has appeared, leaving many to question the veracity of the filming. Is this just another hoax?

Interestingly, this is the third time people have managed to record what appears to be a floating city above China. In early 2017, people in Yeuyang were left shocked after a similar phenomenon appeared in the sky.

In 2016, another set of images and video recordings surfaced on the internet showing another mysterious ‘floating city’ filmed above the clouds in Dalian in northeast China’s Liaoning Province.

In 2015, another ‘floating city’ was recorded over the city of Jiangxi, as an eerie cluster of buildings appeared just above the sky.

The Jiangxi ‘incident’ however, was explained by experts who concluded that the phenomena to be a natural mirage, an optical illusion called Fata Morgana.

Also in 2015, a floating city created confusion among residents of Foshan, as people watched in amazement a giant city appearing out of nowhere. According to media reports, thousands of people stood still, watching the ‘ghostly city’ in what has been the second apparition of a ‘flying city’ in China. The mysterious ‘city’ was reported to have giant skyscrapers and other smaller buildings which are ‘clearly’ visible in the image according to social network users.

But not only have videos of floating cities been recorded over China, interestingly, similar events were also recorded around the world.

In 2011, hundreds of people from the small border town of Dulali in Darazo, Nigeria, claimed to have seen a huge ‘flying city in the sky’. “The giant floating city” appeared out of nowhere, the entire city was surrounded by a thin cloud, it flew very close to the ground, through these “clouds” witnesses claimed to have seen beautiful large buildings, towers and the sound of machines originating from the city. According to local reports, 10-year-old Ibrahim could not believe what he was seeing. 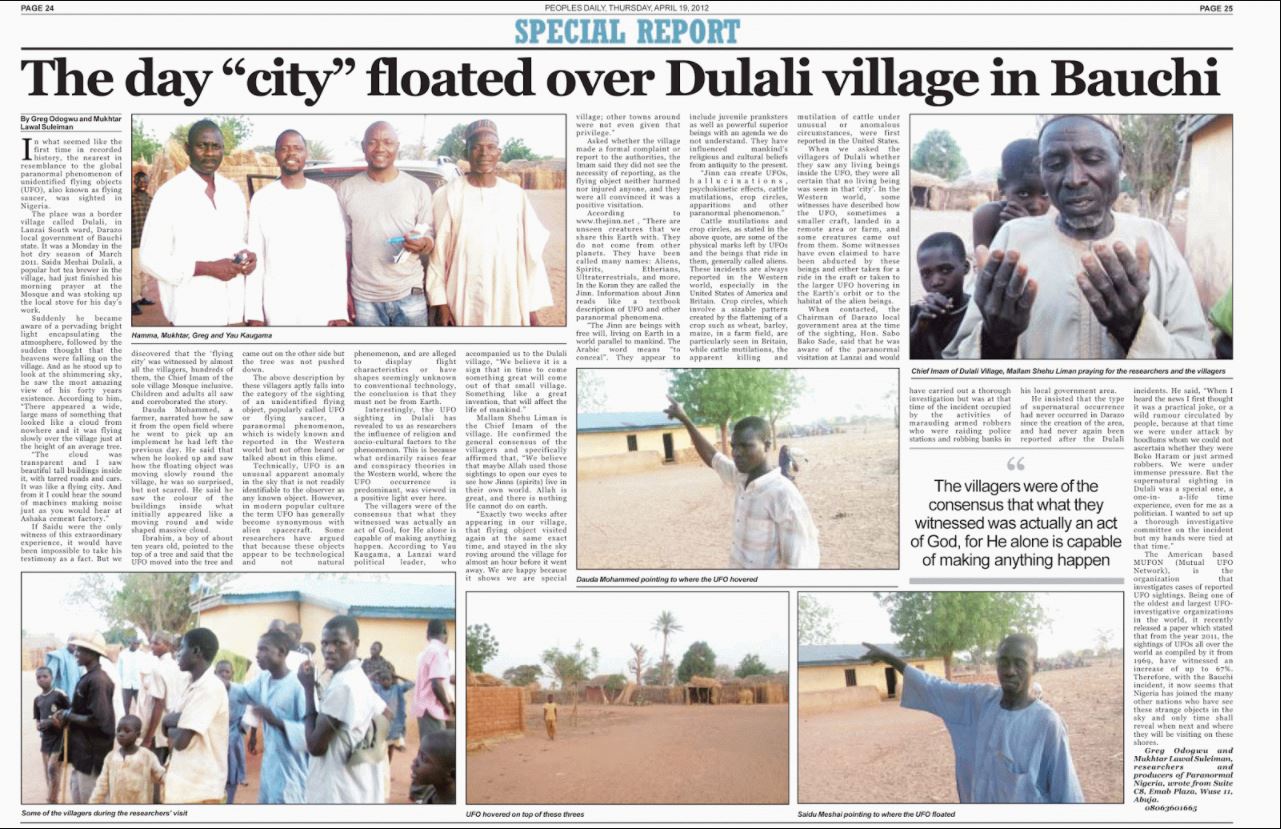 When reporters from the Nigerian national newspaper asked local residents about their opinion what they had seen, they said that it was the work of God, because of their religious beliefs. The Imam of the village, Mallam Shehu Liman, confirmed the sighting, though he attributed it to “Allah” and the “Djinn”, a reference to the spirits in the Islamic and Arab folklore. “We believe that perhaps God used those sightings for us to open our eyes and see how the Djinn live in their own world,” said Liman.

Reports of mysterious structures appearing in the sky have been reported since ancient times. Many of us are familiar with stories about strange creatures that appear out of nowhere, mysterious creatures coming out of giant crafts, flames, spheres, etc… These mythological “ships” were known in ancient India as the Vimana, mythological flying palaces or chariots described in Hindu texts and Sanskrit epics.

While most of these videos are ‘incredible’—what’s cooler than seeing a floating city?—it appears the explanation is actually much simpler than a ‘Massive alien city appearing from another dimension’.

Reference: A BIZARRE floating “alien city” appeared in the sky above baffled onlookers in a mind-boggling video going viral.